Few franchises have managed to achieve such iconic status with only two installments, but the Jet Set Radio series (Jet Grind Radio for the first one in North America,) was one that managed to do it. The series represented all that was great about Sega during the Dreamcast era: their incredible ability to take risks and deliver groundbreaking and inventive experiences that you simply couldn’t get anywhere else.

What better series to get a sequel than this one? Here’s how I’d do a sequel if I were in charge.

Looking at the two Jet Set Radio console games, it’s actually surprising how different they were from each other. This is not a series that was given a “more of the same,” sequel, but instead developer Smilebit completely re-wrote the rules for Jet Set Radio Future, changing what was originally more of a time attack/arcade experience into one much more about exploration. I am actually one of the people who ultimately preferred the original Jet Set Radio to Jet Set Radio Future, but Future wasn’t without its great ideas, and I think an ideal sequel would merge the two different gameplay styles together. 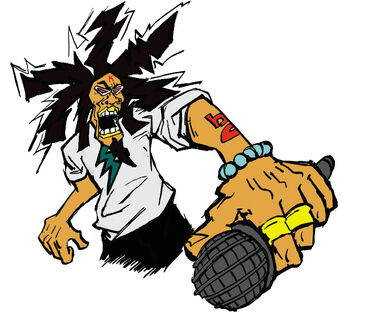 Jet Set Radio was very light on the exploration. Your characters all hung out in the Garage, chilling on couches and jamming out to their music. Using the analog stick, you selected a character, then a level from the map on the wall, and you’d be off. Jet Set Radio Future gave you full control of this process, turning the Garage into an outdoor skate park and letting you explore it freely, and from there taking one of several exits to your destination. In JSRF, you actually had to travel to the levels yourself, going through previously completed areas to get there.

Those are the features I’d take from JSRF. I think the ability to move freely throughout the world, looking for unlockable characters (rather than having them just show up at the Garage), and seeing where each area was in relation to another one…these all helped flesh out the world. In my Jet Set Radio 3, you’d be able to hop onto trains, busses, and subways as a means of quick transport, and this would be required to visit more suburban areas outside of Tokyo-to.

Once you’d get to the levels themselves, though, you’d see me revert back to the old style of gameplay. Jet Set Radio featured small levels with time limits that required you to be quick, especially as you put in the analog stick commands to spray your artwork on Tokyo-to’s buildings. This process was made more difficult by the cops, who chased you throughout the levels as you progressed, their means of capturing you becoming more and more hilariously extreme. A cutscene featuring the awesome Professor K took place after each completed level.

Future, on the other hand, featured large, complex levels designed to take you hours, and you’d often have to complete several to experience the next Professor K cutscene. The cops only chased you in scripted sequences, and spray painting was changed to a simple click of the controller’s trigger. There was a lot more to explore, but overall I always felt that the first game’s faster-paced atmosphere was just much more exciting. My JSR 3 would feature a return of the timer and the more hectic gameplay, but you’d be able to go back into the level after beating it to explore without the time limit (and new areas in it would be unlocked once you’d finish the main mission) and look for hidden items/characters/missions. While completing the levels themselves, the input commands for spraying graffiti would return, and you would be able to choose to play either with the traditional analog stick commands, or use the Playstation Move for a cooler new spray painting experience. (Game would be available on 360/PS3).

One thing I’d add is the ability to head to a store somewhere in the city and purchase power-ups and new graffiti designs. You’d also be able to buy additional tricks and grinds, concept art, making-of vids, songs to hear in the menu, new outfits for your characters, increased power for your skates, increased vitality, weapons like flash bombs to help you hold off the cops, new objects to do tricks off of for the Garage skate park, etc. Cash would come from the score you’d get from each level, (the higher the score, the more your prize) as well as from doing optional odd-jobs for characters who you would be able to find when wandering back through completed levels. You’d be able to customize the look of the Garage yourself, including what graffiti you choose to put on the walls, and you could buy a bar, a JSR-themed pinball machine, table tennis, stuff like that. All interactive.

Graffiti (and other such objects) would still be collectable in the levels and of course you’d have the ability to design your own and buy graffiti from/sell to your friends online with this JSR currency. This currency would also be used to unlock new multiplayer games like racing, time attack tag mode, trick competitions, etc for both online and offline play. Online you’d be able to set up races with other players in certain districts of the city, etc. It would be a free-roaming online experience.

My JSR3 would take place in a much larger area with much more to find, see, and do. That said, the levels themselves, when you’d get to them, would return to JGR’s arcade-style gameplay and energy. We’d also see bigger (and more frequent) bosses, and an even larger roster of characters. Like the first JGR, the story would be slightly non-linear in that you’d get to choose between a couple different levels to tackle, and depending on your choice, the events of the story would change.

As far as the world itself, it could be another futuristic installment, we could return to the present day, or maybe even go into the past to the forming of the GGs. Each I’d be completely fine with.

The soundtrack would be as amazing as the past two games, featuring an even larger roster of songs. Hideki Naganuma and everyone else involved in the previous two JSR games would of course return to work their magic in the music department, along with a slew of just as awesome licensed tracks. Not to mention the fact that you definitely couldn’t do a JSR game without Billy Brown coming back as the voice of the almighty Professor K.

To sum up: Bigger game. Vast city to explore, much more to do while exploring it, more characters to unlock, competitive and co-op online and local multiplayer modes and trick attacks, more graffiti and lots of other stuff to buy with the JSR currency system, more tricks, more songs, more bosses, more character and Garage customization….pretty much everything ramped up. The levels themselves would see a return to the smaller but more hectic time-attack style design as the first JGR, but once you beat them, you’ll be free to journey back through and look for hidden stuff/travel to other locations. The best of both worlds, in other words, and both worlds were pretty incredible to begin with.

Like it? Hate it? Think you’d do it better? Leave your thoughts in the Comments section below!