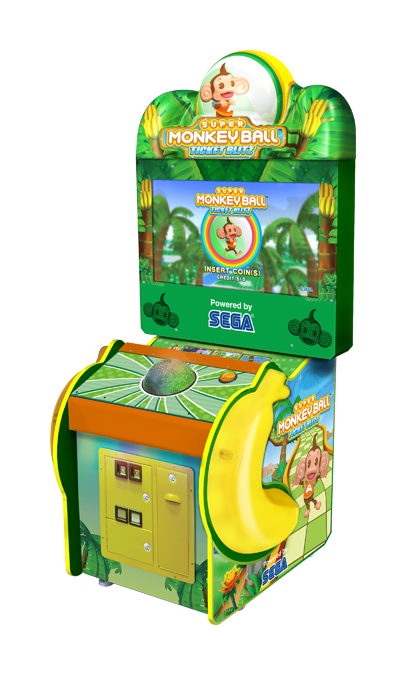 I am very fortunate to live near a brand new Round 1 Arcade. It’s a bowling, Karakoe, UFO Ctacher and Video Arcade that originated from Japan. They tend to have the most brand new video arcade games out there. One they just recently got was Super Monkey Ball: Ticket Blitz. A fairly different take on Monkey Ball that rewards you with prize tickets.

Unlike the game versions which have you controlling the stage the monkey is on, this game has you controlling AiAi (and only Aiai apparently) in his ball by using a large trackball. The main object to to get to the goal before time runs out while collecting as many bananas as possible. This time around, the bananas count for more than score as each one gets you a ticket.  Once you finish a level, it takes you to a bonus stage for one last shot at banana collecting. After that, game over. The level you first play is totally random as the first time I played it was very easy, while the second time was a fairly hard level that didn’t quite make the goal to.

I found the game to be a nice, short burst of fun. It’s a fresh change of pace controlling Aiai instead of the stage and it really puts a bigger focus on collecting bananas. Something I didn’t really give much thought on the console games. The change in gameplay turns it from a faster paced skill game to more of a platformer. In the second level I played, it got very difficult as I made my way around moving platforms and bumpers trying to knock me off the stage. If done right, this could be a great new way to play Monkey Ball on consoles.

If I had any negatives to give, it’s that the game is only one level and a bonus stage no matter how well you do. I know that’s the way with these ticket games, but I would have felt better if it was one long time limit that kept going as I hurried through stage after stage. Also, the size of the machine is desinged for kids in mind. It’s real small and I have to bend my chubby, 6’3 frame over to play.

That said, I really like what they’ve done here. They took the classic Monkey Ball formula, twisted it a bit and made it a fun, ticket giving machine. Now Sega, let’s see a Sonic game where I collect rings for tickets!