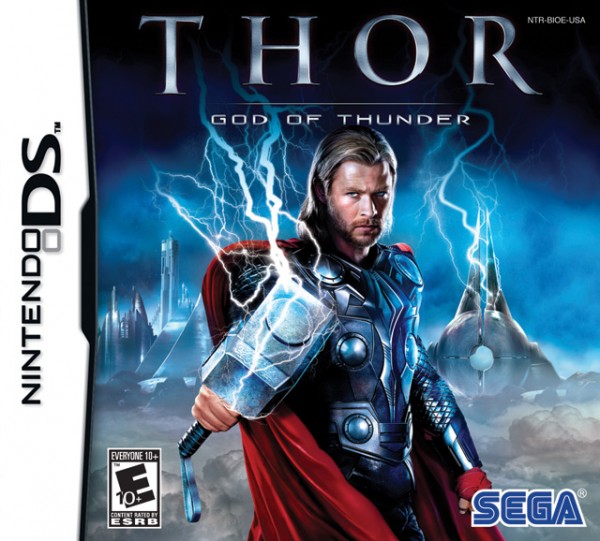 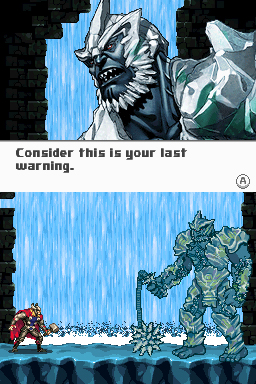 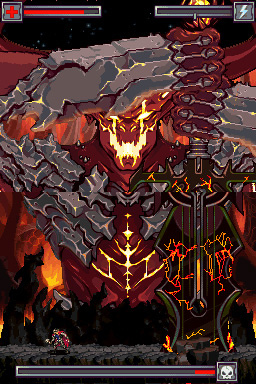 Wayforward uses up both Nintendo screens to help give this side scrolling, fighting  game a large sense of scale. While Thor may be very tiny onscreen (even tinier with some giant bosses), he’s still highly detailed and animated as are his enemies. The attention to detail and animation that is a Wayforward staple is here as well. Thor moves as fluidly as an animated feature. Even tiny details like rain splashing away from Thor’s hammer as he swings it are in.

Probably the most impressive bits in the game are the bosses. Some are just human sized (Hela) or a bit larger. However, there are two instances of some very, very giant bosses that not only take up both screens, but the game shrinks Thor down further to show even more of them as they attack onscreen. It’s an incredibly impressive feat that really shows some of the best 2-D effects the DS can muster.

The music and sound is satisfactory, but not too impressive. Don’t get me wrong. The score is well done and fits the theme of the game well, but is not too memorable. The sound effects are more impressive to me, with every thud of Mjolnir hitting Thor’s enemies and every crack of lightning being very satisfying. 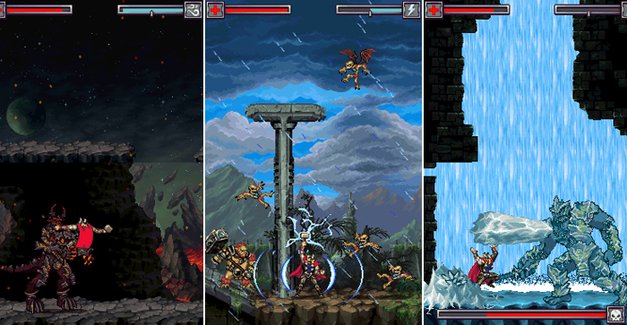 Thor: God of Thunder is a rock-solid, above average 2-D side-scrolling fighter. Thor himself has a large arsenal of moves to choose from, from air-juggling your enemies to charge attacks. You’ll be battling enemies in a variety of ways. You also have several god powers at your disposal, from lightening to shockwaves. There’s also hidden runes to be found that you can attach to Thor’s hammer to give you extra abilities. Most of them either strengthen certain attacks or help your defense. The variety helps keep the gameplay fresh for awhile, but sadly, it doesn’t last forever. By the time I got to the 3rd world, monotony started to break in and it became a bit of a grind. Also, checkpoints tend to be few and far between. Sometimes, I’d fight off three or four waves of enemies only to die and have to fight those same three to four waves again. This becomes a bit frustrating during the final levels when you’re fighting just to survive.

I will say that what really kept me going was the perfect progression of difficulty. Over the time I had with the game, it started from being real easy to somewhat difficult to challenging to incredibly tough. All the while teaching me more strategic ways of beating my enemies without much damage to me while never holding my hand doing so. I figured out the best runes to use for me, how to fight off enemies while keeping clear of lava rain (very difficult by the way) and how to deal with brute strength enemies differently from smaller, projectile-based ones. Near the end, it’s very unforgiving but it feels rewarding the further you progress. 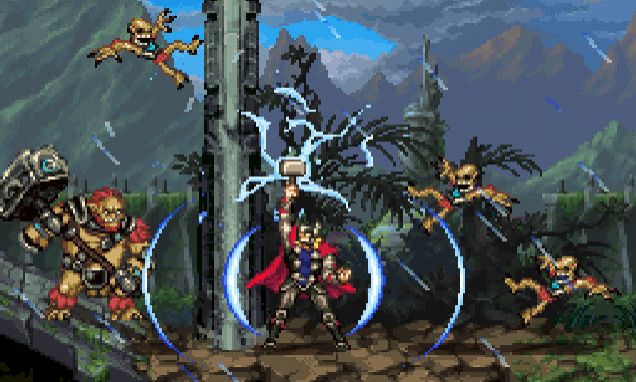 Thor: God of Thunder is a very satisfying side-scrolling fighter. While the first part of the game can feel a bit easy and monotonous, by the time you hit the end of the third world, the difficulty ramps up to just the right balance of challenge and reward. Some may find it too difficult later, but I stuck to it to the end and had a great time doing so. The games lasts just about 5 hours so you might want to consider a rental unless you just play on breaks (like me). If you’re a fan of the movie or the comic book or are just looking for a good old-fashioned 2-D beat-em-up, don’t miss out on Thor for the DS or you’ll be “Thorry”. (I am SO sorry for that.)

Thor game to have Shadow of the Colossus type boss battles