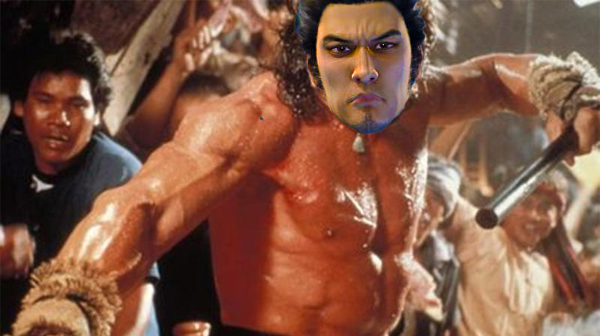 You know that Nagoshi and his newly new named Yakuza Team couldn’t make a new title without featuring their most successful hero, Kazuma Kiryu. It has been confirmed that Kazuma Kiryu will be playable in the game, but not in the single player mode. He will actually be playable online.

“Since this is from the Yakuza team, after all, we figured we’d offer this as a present and as a symbol of the spirit we’re putting into this. Some people may see him as too out-of-place in this near-future setting, but the game is set in Tokyo, after all — I don’t think it’ll feel that strange. I hope you have fun having him go crazy on people.” –Producer, Toshihiro Nagoshi

Kazuma has two different looks, his government outfit will feature him in his white iconic suit. If you decide to play him as a rebel, you will get him shirtless with a Rambo type get up. This includes a bandanna as well.

I guess Kazuma is a better choice than something from Super Monkey Ball.

2 responses to “Kazuma Kiryu brings his swag to Binary Domain”