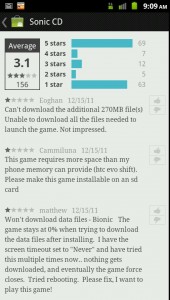 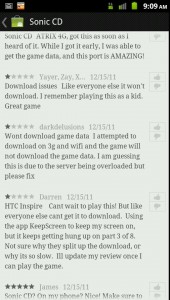 I wake up this morning from a hazy slumber to go straight to the Android market to see if Sonic CD was uploaded. Expecting near perfect scores for the game, I get shocked to see so many one stars rating from users. It seems that a ton of people are angry due to three factors:

Come on SEGA, fix your damn servers. There is a reason why you have 63 one star ratings and 69 five star ratings. I have a feeling if the servers worked and people would be able to download their data, that it wouldn’t have gotten such low scores, even if you couldn’t install to SD or work on Nexus Prime. If it makes you feel better, its getting near perfect scores on Apple’s iTunes stores because people can actually download the game.