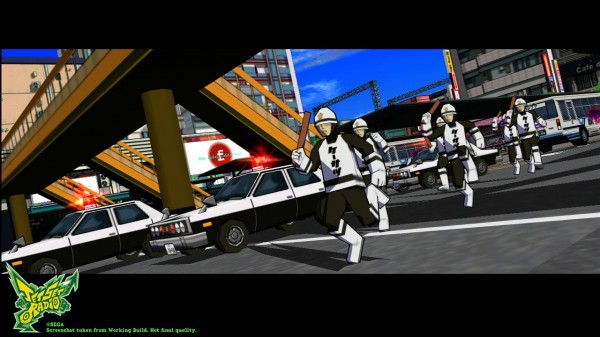 This according to Game Informer Magazine, who recently got some hands-on time with the upcoming digital re-release. They report that SEGA has retained 80% of the original’s soundtrack, and that this HD update will also feature camera controls mapped to the 2nd analog stick, something which, as Dreamcast fans will remember, wasn’t possible with that console’s controller. Region specific added levels will also make it to the digital version, all running at 60 fps.

My thoughts? 80% is unquestionably a majority of the soundtrack, though I’m personally awaiting a list of exactly what was included before getting too excited. I’ll go out on a limb here and assume that the tracks licensed for the North American and European releases aren’t going to make it this time around, but whether or not that’s the extent of the cuts remains to be seen.

Jet Set Radio will be releasing on XBLA, PSN, and PC sometime this year.

[Update] Joystiq confirms that Hideki Naganuma’s music will stay intact. Licensed music that has been confirmed to stay in the soundtrack include “Magical Girl” by Guitar Vadar and “Funky Radio” by B.B. Rights. [/Update]