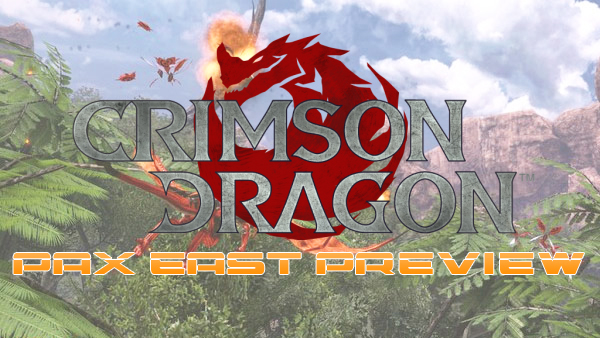 I realize it’s not wise to tell our readers such a thing, but I thought I’d just get that out of the way now. I don’t care if SEGA’s not on the box, nor that it wasn’t at their booth. This is a SEGA game, if not in reality then in spirit, and I’m writing about it. Ladies and gentleman, Crimson Dragon is Panzer Dragoon 5.

I confess, I haven’t been following this game too closely. I’ve seen far too many Kinect titles I’ve thought had potential crash and burn and I wasn’t about to let myself get my hopes up for a new “Panzer Dragoon”. Upon playing it though, I have to say…Crimson Dragon is the best Kinect game I’ve experienced. 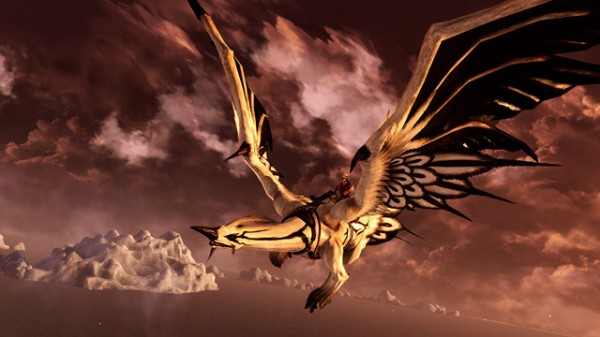 First off….yeah, the game is basically Panzer Dragoon on Kinect. Some changes have been made to the formula to make up for some of the devices shortcomings. The targeting reticule is large, the camera is now controlled automatically instead of by the player and the action at least in the first level is a bit slower than you might expect from a Panzer Dragoon game.

Despite these short comings, CD is still loads of fun. The controls work very well,  better than just about any other action game I’ve played on the device.  You move your dragon around the screen by shifting your body, leaning left and right to move left and right, leaning back to move up and leaning forward to move down. In essence, your body is the analog stick. Just like in any Panzer Dragoon game, there is a reticule that you move around the screen to lock onto enemies. Locking onto them is a simple matter of moving the reticule over them and once your locked on you punch your arm forward to fire. Also like Panzer Dragoon, there is a secondary rapid fire weapon which you activate by using your left arm instead of your right. Finally, you can activate CD’s analog of the berserker attack by moving both of your arms down. The Kinect is very responsive here and unlike other action titles I’ve played on Kinect, it took my only seconds to get a feel for the controls and start flying like a pro. I literally could not imagine the controls being any better on a physical controller. Something I’ve never been able to say about a Kinect title before. 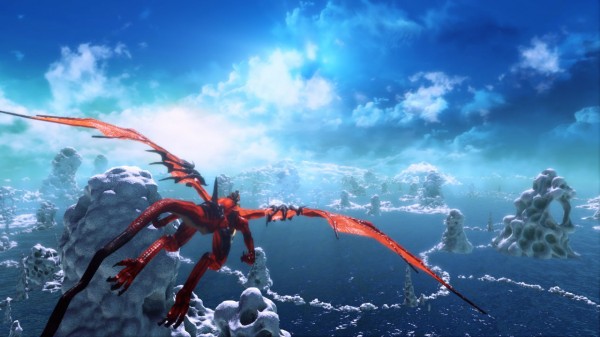 The demo had two levels on display. The first level which is an ice level, was effectively a training level. With enemies attacking the player in patterns players may recognize from an early Panzer level. The second level was a jungle level that felt like it was ripped right out of Orta. It starts out with the player flying through a canyon that had been carved out by the river flowing below. Enemies where more varied here and attacked in swarms that required the player to use the game’s full arsenal. This level is where things really picked up and where I met a very Panzer Dragoon-ish enemy. Something that can be best described as a giant flying pea pod that shoots rows of lasers that the player must avoid. The demo ended with a showdown against two other dragons. It was a fairly easy fight as the dragons essentially just chased you around and shoot massive laser beams at you until you killed them.

Graphically, CD is a very beautiful title with some neat effects on the dragons and the environment. Unfortunately, there are some frame rate issues and the game was falling below 30FPS fairly consistently, something they will hopefully correct in the final game. I’m also not a big fan of the demo’s dragon designs. They are bulky with proportions that look borderline cartoon-y and they lack the elegance and alien nature one is used to seeing from the dragons in Panzer Dragoon. Thankfully,  other dragon designs revealed through screens and concept art look better and closer to what you might expect from Panzer. 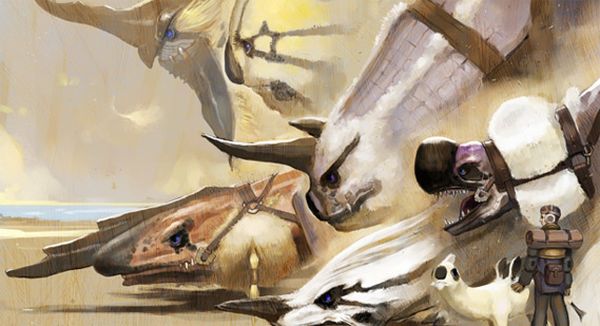 Crimson Dragon is a game that should be on every SEGA fan’s radar. I’ve long felt that the series has had a lot of missed opportunities in a generation that seems made for it. When I first played my DS, I knew the touchscreen was a perfect way to move the reticule. When the Wii was first revealed I felt that its pointer controller would be perfect for the game. Sony’s Move controller looked like it would be an even better way to provide an all new Panzer Dragoon experience. Finally, Kinect looked like the perfect way to put you into the game. Finally, after years of waiting, Panzer Dragoon’s creator has finally innovated the formula on one of these devices and it plays great. Everyone who wants a new Panzer Dragoon, you need look no farther than this spiritual successor.