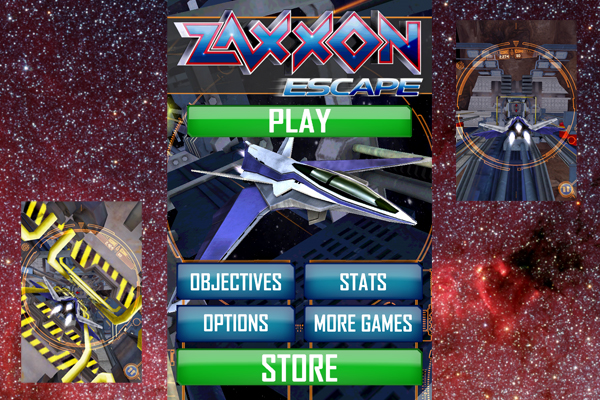 When SEGA announced Zaxxon Escape, I was very excited. SEGA was doing something they rarely do: resurrecting an 80’s IP that has been dormant since the mid-90’s. For those not in the know, the original Zaxxon was an isometric shooter released by SEGA to arcades in 1982. The game was played from a third person perspective at a top down angle, with simulated 3D pulled off via effects like shadows and an altitude meter. Gameplay involved shooting down as many targets as possible, whilst dodging obstructions such as electric fences, walls and enemy fire. Players also had to keep track of their fuel level, which was replenished by shooting fuel tanks. Zaxxon went on to be ported to numerous platforms and even had three sequels. Now, with Zaxxon Escape, SEGA takes us back to the ending of the first game, as players are tasked with escaping Asteroid City after having defeated Zaxxon. 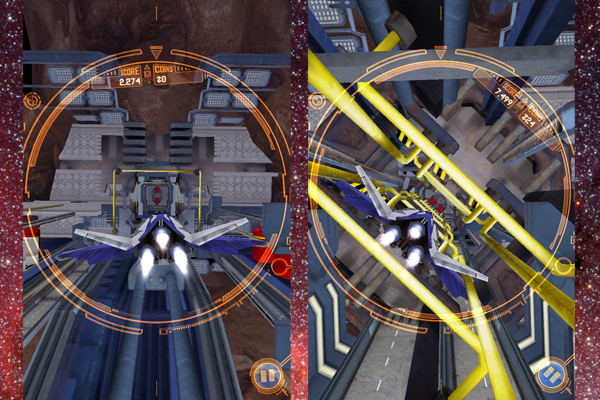 With the change in premise comes a change in gameplay. No longer is the player assaulted with enemies and no longer is fuel a concern. Emphasis has now been placed on escaping, which means players must dodge walls and electric fences, shoot open hatches, and turn corners at the last minute lest they be destroyed. Perhaps the biggest change to Zaxxon, which can easily be seen in the screenshots, is the perspective. This is probably what makes or breaks the game for most fans, as the camera has shifted to directly behind the ship and the 3D is no longer simulated. This second point can be forgiven, as even later Zaxxon titles employed real polygon graphics, but some may argue that removing the original perspective all but removes what makes Zaxxon unique.

This brings me to the rotation element of Zaxxon Escape. In the original game, players had to fit their ship through keyhole openings in walls and electric fences by positioning their ship up or down. In Zaxxon Escape, this gameplay element is translated to 360˚ rotation of the ship.  It could be said that this is still sticking true to the Zaxxon formula, just in a different dimension. How does this rotation gameplay fare? Very well, actually! 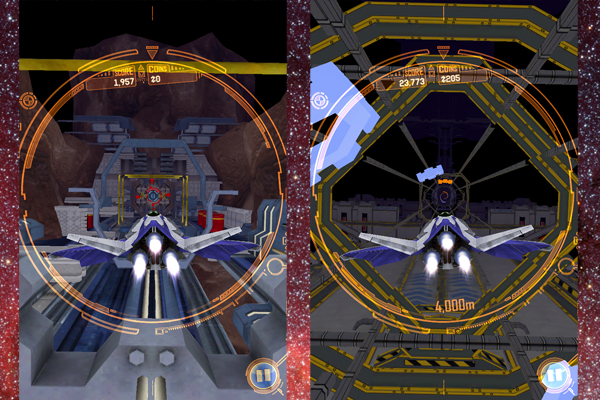 As a game in and of itself, Zaxxon Escape is quite fun. Flying through endless corridors, collecting Z coins to be used for power-ups, dodging walls and electric fences by rotating the device, shooting power-ups and closed hatches and swiping on screen to change corridors. In fact, Zaxxon Escape plays like a refined Sewer Shark without 90% of the frustration. That 10% frustration you do feel are those final moments when you just know you can’t keep up with the increasing difficulty and you crash your ship. But to Zaxxon Escape’s credit, after blowing up you have the urge to try and beat your distance in another run. Yes, despite the name “Escape” you will never actually escape the game, as the game is seemingly endless, with each run-through bringing a new randomized layout of the fortress. This is another element that may turn off players, as it effectively makes the game an endless runner with high score, distance and achievements being the objectives. Gameplay is extended thanks to power ups and new ships, but these will not bring about an escape from Asteroid City.

Despite being a fun endless runner, Zaxxon Escape changes up the formula a bit too much to make it a recommended title for fans of the series. While the environments do resemble those of the original game, with the giant red and gray towers, brick walls and electric fences of the original game littering the backgrounds, players do not interact with these elements of the scenery aside from the electric fences. Also, the game lacks the original yellow, orange and pink player ship which would have been an AWESOME piece of fan service as an unlockable (Note to SEGA: please add this ship in an update). Also, while the music isn’t bad, it also isn’t catchy nor is the original Zaxxon music referenced. Again simply adding in the original Zaxxon stage music as a bonus would go a long way for the title. And how about the original game? It appeared in the teaser for Zaxxon Escape, yet is nowhere to be found. Given the emphasis put on the original, and the lack of any mobile port, either adding the original as a bonus or as a separate app would be a smart move for SEGA.

In conclusion, if you are looking for an endless runner for your iOS device, and you enjoy space shooters, check out Zaxxon Escape. But if you’re looking for another title in the Zaxxon series, you’ll be disappointed. As is, Zaxxon Escape is more of a spin-off than a sequel. 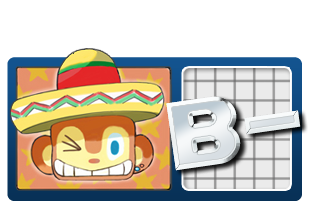