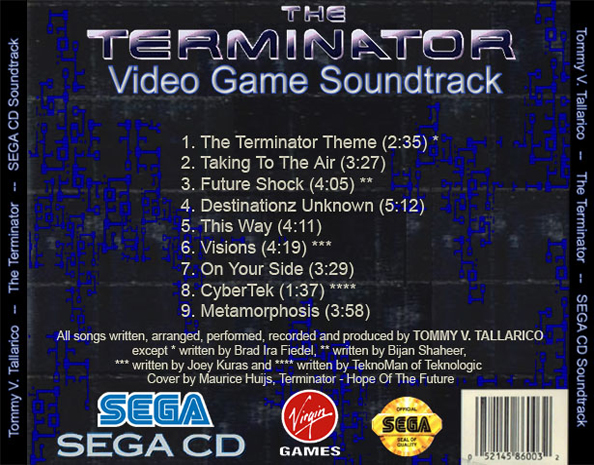 For SEGAbits’ 3rd anniversary I thought I’d devote this month’s Tuesday Tunes to choices from other staff members! This week we’ll be highlighting the host for the SEGAbits video series “My Life With SEGA” A.J. Rosa. His selection? Two songs from The Terminator for the SEGA CD, a game that he covered in My Life With SEGA as part of his Schwarzenegger double feature. Enjoy!

The Terminator for SEGA CD didn’t have any fancy scaling and rotation effects; it’s true. However, it did have a kickass soundtrack! That’s saying a lot, because I generally criticize movie-licensed games when they fail to include score from the actual film. While it does feature Brad Fiedel’s iconic theme, the score was written and performed by Tommy Tallarico. The man is a legend in his field, having scored hundreds of games, such as Earthworm Jim, Unreal, Robocop vs. The Terminator and Cool Spot. Rather than aping Fiedel’s destinctive style, Tallarico went his own way and wrote something more akin to rock opera. It’s bursting with wicked electronic guitars that kick-start your adrenaline, melodies that inspire feelings of foreboding and desperation….

This score is so fucking awesome that I made a copy for the car. I’ll listen to “Future Shock” on my way to work, “Destinations Unknown” on my way home. That CD didn’t leave my player for a month. So what you’re about to listen to is – essentially – my Going to work/Going home ritual. I hope you enjoy it as much as I do.

Check out the songs below the break!