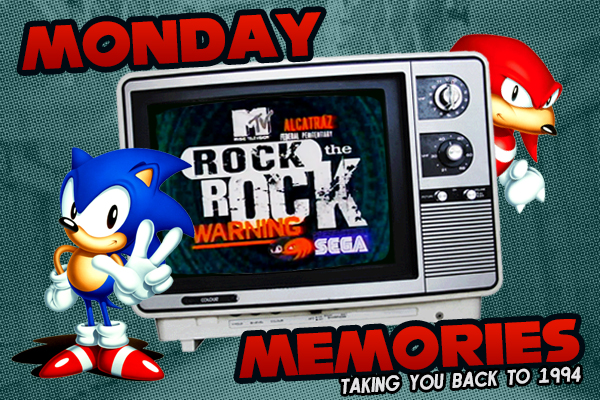 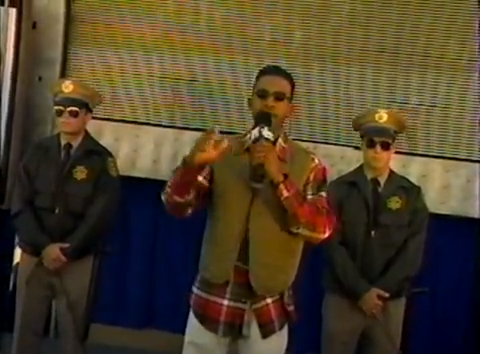 Do you smell that? It’s early 90’s MTV! And since this show takes place in Alcatraz Island, you are going to have to hire actors to dress like police officers. Also you will notice very quickly how everyone that works for MTV has to wear sunglasses. I guess sunglasses equals super cool, especially when it’s paired up with flannel and a vest.

Talking about the guy in flannel, that is our host Bill Bellamy, and you probably have seen him on soon to be cult classics like “How to be a Player” and  “Any Given Sunday“. Another good fact is that he invented the phrase “booty call”, I have to say, that is not a bad thing to be known for. 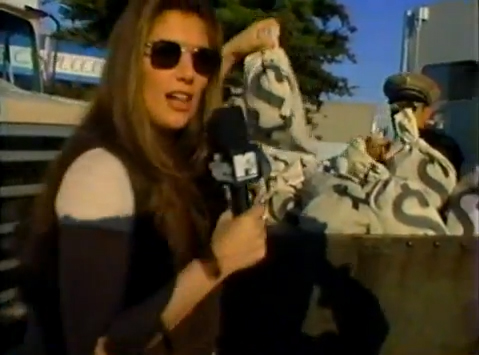 Is that who I think it is? Yep, its Daisy Fuentes back in her prime. Sadly for SEGA fans, this isn’t the last time she got involved with the company. SEGA teamed up with her to release their Wii fitness game “Daisy Fuentes Pilates” which was largely ignored and considered a bad idea. Thankfully, we’re in 1994, and this is before fitness games. This is when nerds where nerds, and MTV did actual programming worth watching.

In this scene, Daisy Fuentes is telling the audience what the winner will win. You see, the Rock the Rock TV Special took the ‘best players’ from around the world and put them in a Sonic & Knuckles tournament. The first place prize? $25,000 dollars. As you can see from the bags with money symbols, they weren’t joking. I mean, its not like they would just put money symbols on bags, right?

Classic 90’s fashion on display in the first picture. Typical baggy shirts, backwards baseball cap and the droopy eyes because he is just crashing off all the sugar he had hours before. This is basically every early to mid 90’s kid in America around that time. Video games, sugar and backwards hats. I will miss the first two, but you can keep your fashion. Thank you.

Then we have an interview with an Asian contestant. Of course, let’s put a bandanna on him, just like that popular movie ‘Karate Kid‘. I really hope that the kid just wore it as a joke and it wasn’t some stupid American MTV producer’s idea. It would be like having me on the show with a sombrero, talking about tequila and riding a donkey.

But hey, enough hating on the time period, let’s get to the juicy bits. 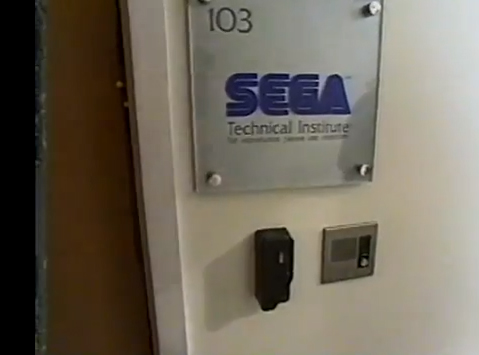 Wait, they are going to check out SEGA Technical Institute? Heck yes! In this scene, the lady had to slide a card to get into the building. You would think that is enough, but no, she also has to say a password. Guess what the password is? “Knuckles”. Great, I’m going to change all our passwords on our SEGAbits social media networks to “Knuckles”. I bet no one will guess that. 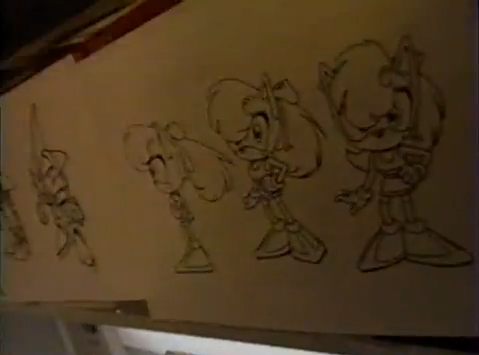 During a montage of the studio, the camera pans past this concept art. Do you know who it is? It’s concept art for Tiara Boobowski, who was set to appear in Sonic X-treme, a canceled Saturn game. As most of you know, there was a lot of drama and controversy surrounding the game’s development and eventual cancellation.

You are probably asking yourself who that other sketch is, the one on the left. Well, it happens to be the Mecha Sonic Mark V, which was never used. It was probably for the best, since the design was actually very odd, really looks like a mech version of Ristar.

It’s SEGA employee interview time! First up we have STI’s General Manager Roger Hector talking about what its like managing a team like STI. He has a great philosophy of having a laid back work environment. You know, how can you make fun games if you aren’t having fun at what you do? I guess it worked, STI made some of the finest games in their day!

So what has Roger Hector been up to recently? Right now he is CEO of UGetit, a competitor to the ever popular Craig’s List. Before that he was Sr. VP Product Development at Namco-Bandai.

Hey, how can we look at the STI offices and not shine the spotlight on some of their developers? In this segment they picked Hirokazu Yasuhara and Victor Mercieca. They had Victor do the talking since, you know, Hirokazu’s native tongue is Japanese. He mostly talks about what it’s like being a game designer, older game ideas he has had and a few other tidbits.

What have these gents been up to? If you don’t know by now, Hirokazu Yasuhara is known as a legendary game designer now. He has had plenty of work since leaving SEGA, mostly working on games with Naughty Dog (such as the Jak series and Uncharted series). Recently he made headlines by joining SEGA’s then rival Nintendo. As for Victor Mercieca, I couldn’t find much information about him online. If you know what he has been working on, post it in the comments and we’ll edit the article.

Adrian Stephens isn’t just a dude that wears sensitive color clothing and has a sweet pony tail, he is also Technical Director over at STI. As seen here in the video, he was responsible for the physics of Knuckles, who was playable for the first time on this game. He later worked on the great Comix Zone. He sort of looks like the lead character, doesn’t he?

After leaving SEGA he went on to design games like the Vigilante 8 series, licensed Shrek games and True Crime: New York City. In early 2007 he went to create his own development studio called isopodlabs. He created a XBLA sequel to the Vigilante 8 series called Vigilante 8 Arcade. The site right now is even teasing a game for 2012 that hasn’t been revealed yet. Maybe it was canceled?

Next we have a look at Sonic & Knuckles’ Musical Director, Howard Drossin. Given that this is MTV, this is probably what they should have focused on, video game music. But MTV isn’t all about music, right? He says in the interview that he creates all the sound effects and music for STI’s games. Must be a great job, getting paid to create music. Especially music that fans cherish for years and years.

Guy is still very much a big name in the industry. His latest project was the movie The Man with the Iron Firsts where he co-scored the soundtrack with legendary hip-hop artist RZA. He also scored Baldur’s Gate II: Throne of Bhaal, Splatterhouse and the ill received Sonic and the Black Knight. You can check out his blog here.

Who doesn’t want to draw Sonic characters and get paid for it? I know there are thousands of youngsters on the internet doing that for free. Are they good? We’ll leave that as a subject for a later debate. The spotlight artist here are Kunitake Aoki and Chris Senn. Chris does all the talking due to Kunitake’s first language most likely being Japanese.

Game Testers usually don’t get spotlights in interviews at the studios, but these young looking college students got a chance to be on MTV. Look at the 90’s fashion in full swing, along with a cute red head. I can’t complain.

They even coin the term ‘SEGA thumb’, where you played too many games that you get blisters on your thumbs.

Dean Lester talks about how important it is for his team to deliver the most immersive, fluid, animated games on the market. It’s funny, it seems that during the 16-bit era, having good animation was a big thing. Now immersion in games is done through dialogue and story, looking at games like Fallout 3 the characters are almost robotic.

At SEGA he worked on games such as Comix Zone, The Ooze and Ecco the Dolphin. Outside of SEGA, he worked with Microsoft on their Simulator games (Flight/Train sims). Seems that for most of the 2000’s he has been missing in action. 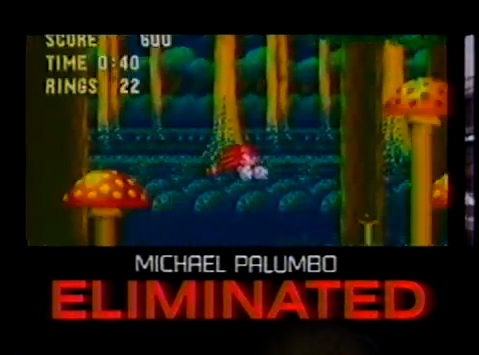 So you are probably saying what type of competition did they have in Sonic & Knuckles? It isn’t like it was designed for tournaments or anything. Well, they did a ‘ring elimination’ challenge where the kids played through the game collecting rings, the ones with low rings got eliminated.

So who won the grand prize of $25,000 dollars? What better way to find out than watching the TV special for yourself.