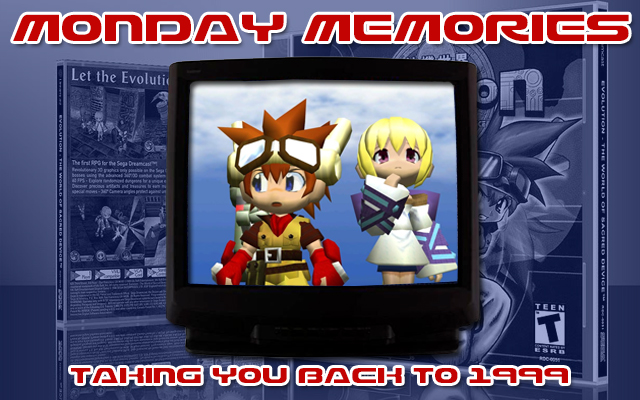 It’s funny because looking at the mostly negative reception the game has received among the gaming community, and even comparing it to its contemporaries (the game actually released months after Final Fantasy VIII) it becomes more apparent that while I can’t argue with much of the criticism leveled at it, and while I never managed the complete the game, I enjoyed the hell out of it. 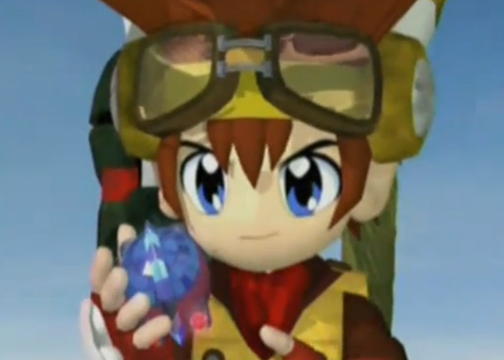 There’s no getting around it for me; Evolution featured a cast of characters who may not have been the deepest around, but as far as pure charm went, they were all likable from the start. Whether it was main character Mag Launcher and his thirst for adventure (and crippling debts) or the quiet and mysterious Linear, or of course the strong-willed Pepper and rival Chain, every character to me was instantly memorable. Together they all had a great dynamic, and I remember it actually being a difficult choice to decide who would accompany me on my adventures through the various ruins.

Of course, I know now that these characters were about as standard as you can get as far as Japanese RPGs go, but to a person very new to this type of story-driven game, I was surprised at how funny their dialogue was, and how they functioned as a party. They all played very differently in combat as well, each with their own Cyframes, their own abilities to unlock, and their own potential for growth. Combat was a very basic turn-based affair, but the craziness of the special moves and the personalities of each character added so much flair to the proceedings.

The characters were actually one of the few things that I remember critics back in the day praising, and they would all make a return in Evolution 2, but that’s for next week… 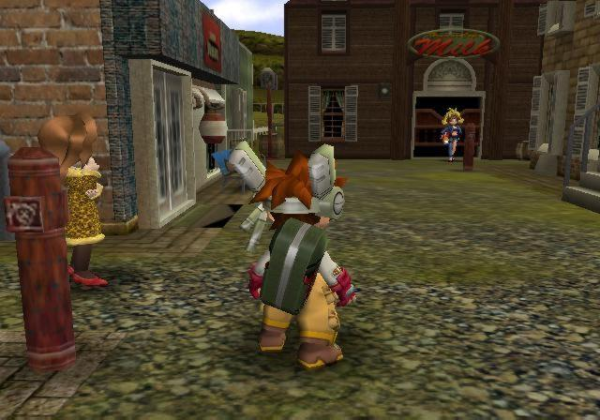 One thing that’s become quite apparent over this past console generation we’ve just been through; Japanese RPG fans love their towns.

I’ll be the first to admit that Evolution, to a seasoned RPG fan, was seriously lacking in this area; its one city, Pannam Town, occupied an area smaller than Station Square and featured almost nothing to do but chat with your main party members, visit the Society Museum, and upgrade your equipment. Still, it had a definite “feel” to it; It was a small town for sure, and that was a drawback. What I liked far more about it though was the purpose that it served in the game. Evolution was a dungeon crawler, and it made no effort to hide this. The dungeons were lonely, randomly generated towers, with nothing but enemy encounters and good, but downbeat, atmospheric music playing as you went from floor to floor. It was a sigh of relief, then, to clear the boss at the top and arrive back in the cheerful Pannam Town, with all your characters around to talk to, cutscenes to witness, and its bright presentation.

It wasn’t much of a town, by any standard. But it’s the feeling that stuck with me. When I eventually delved into real Japanese RPGs down the line on the PS2, this “feeling” being present in each RPG’ towns would become a major factor in my enjoyment of the games at large. And the feeling I got from the towns in the Evolution games (though I’ll give Shenmue credit here as well) definitely played a role in that.

One cool thing about the timing of the Dreamcast as a transitional console was that it carried with it some of the old, while at the same time diving the industry headfirst into a new era. Though we saw substantial advancements in the category of video game audio on SEGA’s final gray box, we also saw some great MIDI music that benefitted from the more modern technology and larger disc space. Skies of Arcadia and Grandia II are the best examples of great MIDI on the system, but Evolution also featured a MIDI score that makes me equally nostalgic; both in equal measure for PS1/N64, as well as for the early 128 bit era. At the time I thought it was warm and pleasant, and while in the dungeons, moody and atmospheric. Nowadays, it’s probably the category that stands out to me the most upon replaying it, if only for the pleasant nostalgia it effortlessly gives off.

I’m not going to go too out of my way to defend the rest of the game. The random dungeons could be incredibly boring, the difficulty spikes of the bosses and the fact that they leveled up with you threw the game’s balance totally off, and of course, the fact that you’re dealing with a pretty limited RPG; a dungeon crawler, simply put, makes it understandable why this series didn’t experience a life beyond the Dreamcast and its eventual Gamecube port.

But as a preteen who just happened to stumble across Evolution while in a Blockbuster looking for cool things to rent on my new Dreamcast, it was a game unlike anything I’d played before. It was flawed in many ways, but at the same time, this simple, charming, fun Japanese RPG dungeon crawler grabbed my attention from the start. It taught me what a turn-based battle system was. It gave me that sense of Japanese RPG “warmth” that I hadn’t seen up until that point. And to a little kid, it felt like a real adventure when Mag and his crew took off in their seaplane to explore and conquer the dark ruins. It’s what got me into Japanese RPGs; a subgenre that would become a huge aspect of my time spent gaming going forward, and one that to this day holds some of my favorite gaming memories of all time.

It’s in this way that a game that many deemed to be trash turned out to be a treasure, at least, as far as I was concerned.

Then there was Evolution 2, a sequel that made some major improvements to the original. Improvements which nevertheless went completely unappreciated among the critical community. But that’s for next week…

8 responses to “SEGA Memories: How Evolution proved that one man’s trash was another’s treasure”