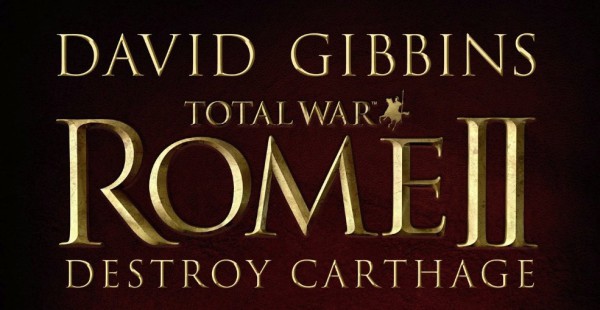 I am a sucker for video game novels. I recall reading Myst: The Book of Atrus for a book report and thinking I was the coolest kid in school. SEGA Europe, in partnership with Pan Macmillan, will soon be releasing historical adventure novels based on the Total War franchise, so now kids can have a reason to read SEGA related books for school! Just tell them it’s world history. Coinciding with the release of Total War Rome II, SEGA plans to release four novels written by acclaimed adventure novelist David Gibbins. The first of these books, entitled Total War Rome II: Destroy Carthage, is due out September 3rd and can be pre-ordered now.

David Gibbons seems enthusiastic about the new series, stating “what really attracts me about the Total War games is their historical authenticity and attention to detail, as well as the contexts ranging from antiquity to more recent times that closely match my own range of interests.My novels will not only enrich the experience for Total War players but also stan alone in the wider market, where I see huge potential and an even bigger audience for the Total War franchise.” SEGA and Pan Macmillan plan to cross-promote the novels, including in-game marketing. Who knows, what you read could very well seep into the game you’re playing, allowing for a richer experience on both sides.

The battle of SEGA and Nintendo to be made into a book and a film – film to be made by Seth Rogen and Evan Goldberg
Book Total War Total War: Rome II

2 responses to “Total War to enter the world of historical adventure novels – reading as you truly imagined it!”