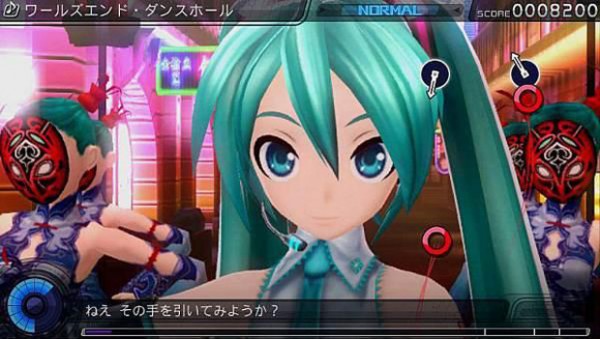 After months of teasing and testing the waters, The SEGA Blog has revealed that Hatsune Miku: Project Diva F will be receiving a Western release. The game is set for an August 2013 release on PlayStation 3 and Playstation Network in North America, and in Europe on Playstation Network. So no physical copy for European fans, unfortunately. Still, Miku fans finally get a Western console release so beggars can’t be choosers – unless you’re living in America.

The SEGA Blog post details Miku’s popularity in the West, citing over 950,000 English speaking fans on Facebook, the Nokia Theater concert selling out, and the time when SEGA asked fans to like and share an image of Miku and in less than three days the post received over 25,000 likes and 15,000 shares. Hatsune Miku: Project Diva F will also be getting a demo, which will be available on June 11th for the U.S. and June 12th for Europe.

Slightly off topic: Remember when Sumo Digital stated that SEGA had approved a DLC racer for Sonic & All-Stars Racing Transformed, and Miku was second to Ryo Hazuki? Given that Miku now has a Western presence, could Sonic & All-Stars Racing Transformed Miku DLC be planned to release alongside Hatsune Miku: Project Diva F? We’ll have to wait and see…

Read the full press release after the break!

RELEASING IN THE WEST

SAN FRANCISCO & LONDON – June 6, 2013 – SEGA® of America, Inc. and SEGA® Europe today announced that Hatsune Miku: Project DIVA F™, the ultimate rhythm game where players can experience a concert with the virtual diva at any given moment, will be available in North America on both PlayStation®3 system and Playstation®Network, and in Europe on Playstation®Network. Being the first console game released for the franchise in the West, Hatsune Miku: Project DIVA F will include all of the updated graphics, additional songs and features of the Japanese version, but fans won’t have to wait long to play the game as the demo will be available on June 11th for the U.S. and June 12th for Europe.

Her popularity continues to increase in the West and she has over 950,000 dedicated English speaking fans on Facebook. In 2011, she packed the Nokia Theater in Los Angeles for her first ever Western concert, and tickets sold out almost instantly. To gauge interest for Hatsune Miku: Project DIVA F in the west, SEGA asked fans to like and share an image of Miku to pledge their support, and the response was astounding. In less than 3 days, the post received over 25,000 likes and 15,000 shares.

“It’s very rare that we’re able to answer the overwhelming support and demand for a game likeHatsune Miku: Project DIVA F,” said John Cheng, President and COO, SEGA of America.  “And we’re excited to be able to deliver this creative and unique experience for the western audience to enjoy.”

Step onto the world’s ultimate stage! Join Hatsune Miku in an all-new video game featuring selections from her popular songs. Hatsune Miku: Project DIVA F features 38 unique songs including popular tracks like Tell Your World and Black★Rock Shooter. Players can create and share their own Miku videos in “Edit Mode” and can customize the popular diva with over 90costumes and 100 accessories.

Yakuza 5 avatars hit US PSN – Could the game be releasing soon?