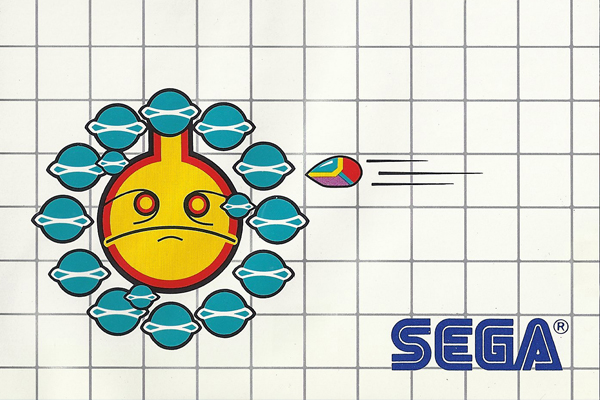 Fantasy Zone is a surreal arcade game created by Sega in 1986. It was later ported to a wide variety of consoles, including the Sega Master System and the Nintendo Entertainment System. The player controls a sentient spaceship named Opa-Opa who fights nonsensical enemies in settings atypical of the traditional scrolling shooter, thus it is considered a cute ’em up.

In the game, the player’s ship is placed in a level with a number of bases to destroy. When all the bases are gone, the stage boss appears; when the boss is defeated, the player moves on to the next level. There are two buttons: shoot and bomb; the normal shot is generally useful though weak, while bombs are powerful though of narrow use. One major difference between this and many other shooters is that the player can turn around and fly the other way; the screen will scroll along with the player. There is also a shop that occasionally can be accessed. The player can buy items and weapons from it using coins from defeated enemies.

The game Space Harrier, also by Sega and released the previous year, supposedly takes place in “the Fantasy Zone” as well (Space Harrier begins the phrase “Welcome to the ‘Fantasy Zone’! Get Ready!”). It includes the same bright pastel color scheme, although the game scrolls into the screen as opposed to horizontally. However, this may be just a coincidence. Learn more at SEGA Retro 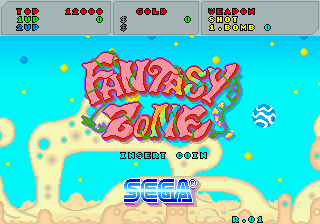 Fantasy Zone (ファンタジーゾーン) is a side-scrolling shoot-’em-up by Sega, originally released in 1986 for Sega System 16 arcade hardware. It is the first entry in the Fantasy Zone series, a franchise that would be supported by the company in the late 1980s but largely abandoned by the mid-1990s. 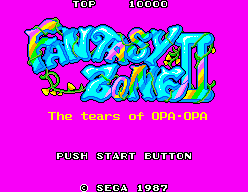 Fantasy Zone II: The Tears of Opa-Opa (ファンタジーゾーンII オパオパの涙) is the direct sequel to Fantasy Zone, initially released for the Sega Master System in 1987.

Fantasy Zone II is very similar to the original game, however makes a few important changes. Levels are now split up into sections, which can be travelled to and from via warp gates. Unfortunately the game lacks a radar, which makes navigating the levels more difficult than in its predecessor. It is also possible to visit the shop at any time, rather than relying on a balloon to appear.

Aside from this the game is much the same as before – the player controls Opa-Opa and must destroy “bases” littered throughout the level. When all the bases are destroyed, a boss will appear, and defeating the boss will allow the user to progress to the next level. The Japanese Master System version is compatible with the FM Sound Unit. 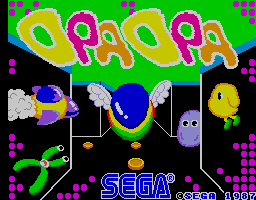 Fantasy Zone: The Maze, known in Japan as Opa Opa (オパオパ), is an entry in the Fantasy Zone series of video games. It was released for the Sega Master Systemin 1987, with a Sega System E arcade version following shortly afterwards. It is often referred to as “Fantasy Zone III”, though this is not an official title.

Unlike previous entries in the series, Fantasy Zone: The Maze is similar to Pac-Man. The hero, Opa Opa, must navigate around a series of mazes collecting coins while avoiding enemies. These coins can be used to buy weapons, giving Opa Opa a defense or allowing him to travel faster. The levels are based on those found in the original Fantasy Zone, though there are also bonus levels in which Opa Opa must collect as many coins as possible before the time runs out. 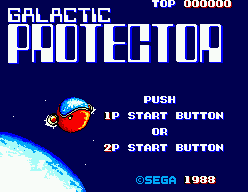 Galactic Protector (ギャラクティックプロテクター) is a Sega Master System shoot-’em-up game developed and published by Sega. It stars Opa Opa of Fantasy Zone andZillion fame, who must save various planets from enemies and debris hurtling towards them.

The game is built specifically for the Paddle Control, and therefore cannot be played on a standard Master System Control Pad. This also makes emulating the game tricky.

Like the Paddle Control itself, Galactic Protector was not released outside of Japan. It was released as part of the Fantasy Zone Complete Collection for the PlayStation 2, also Japan only.

Fantasy Zone Gear: Opa Opa Jr. no Bouken (ファンタジーゾーンGear オパオパJr.の冒険), released outside of Japan as just Fantasy Zone is a Game Gear shoot ’em up game that is part of the Fantasy Zone series. Despite having the same name as the Master System game in western regions, Fantasy Zone Gear is in fact a completely different game which makes use of the Game Gear’s extended color palette.

Fantasy Zone Gear offers very little to the table, other than new stages and music (though many of the jingles are identical to that of the original Fantasy Zone). Due to size restraints, it is unable to show any kind of HUD in game, however Opa-Opa’s equipment can be changed at any time by hitting the 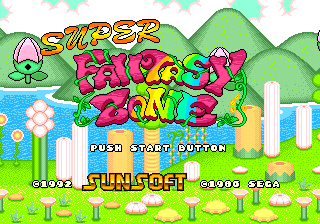 For unknown reasons the game was not released in cartridge form in North America, but is currently unconfirmed as being a Sega Channel title. It eventually saw a more widespread release as part of the Wii‘s Virtual Console service. 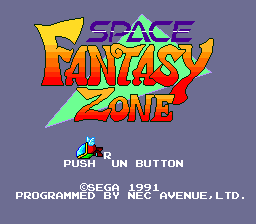 Space Fantasy Zone is an unreleased PC Engine CD-ROM² game developed by NEC Avenue. It attempts to bridge the gap between Fantasy Zone and Space Harrier, two games set in the same fictional universe of the “Fantasy Zone”.

It is a rail shooter similar to Space Harrier, but features Fantasy Zone‘s Opa Opa as the main character. Enemies are taken from both games and the music is a mix between the two as well. There is a shop similar to the one in Fantasy Zone also, and strangely the introduction sequence bears a resemblance to Galaxy Force.

Though it was mentioned several times in the gaming press, Space Fantasy Zone never saw the light of day. This is potentially due to legal disputes with Sega who at this point (1991) were planning their own CD-based add-on for the Sega Mega Drive. Another possible reason for cancellation was due to quality problems – as the PC Engine CD-ROM² cannot natively scale sprites like Space Harrier in the arcades, it can lead to very “choppy” scaling and other restrictions making it look less appealing.

A prototype was leaked to the internet many years after cancellation. Though it seems to be mostly complete, levels can be bypassed by accessing the shop, and most of the music seems to be missing. 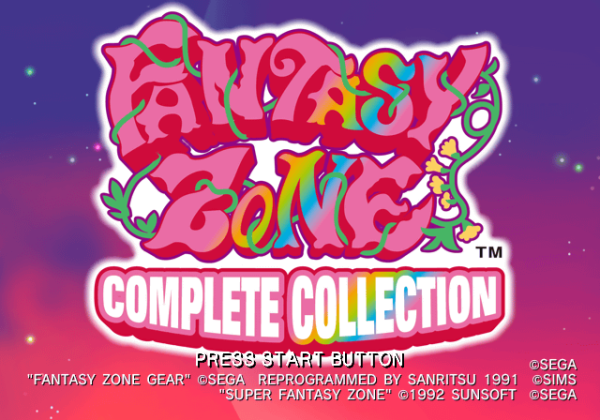