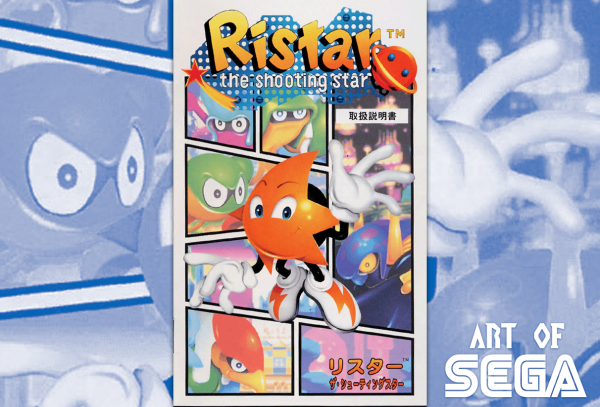 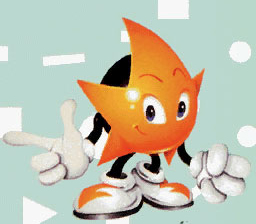 Our main character had a wildly different background between regions. In the western version of the game Ristar is out to rescue his dad, who’s been captured by Greedy. In the Japanese version, Ristar is summoned by Star Mother Ouruto to answer the prayers of the people Greedy is subjugating. Ristar actually had a different personality between regions, too. Back in the 90s it was a common practice among localization teams to give happy looking Japanese characters “serious” expressions. Check out the difference in sprites below:

Ristar’s coolest move is easily his ability to bounce around the stage. After spinning around on a spinner to build up momentum, Ristar can hurl himself into the air. He careens in any direction the player chooses, bouncing off of the stage’s surfaces and destroying any enemies in his wake. The player’s ability to control this move can be critical at times, especially when it comes to maximizing the end of stage bonus by exiting at the top of the screen. The only way to do that is to bounce off of the ground in just the right way so that Ristar can exit the screen before losing momentum. 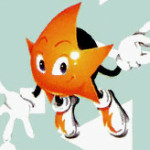 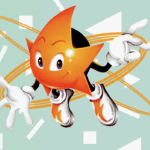 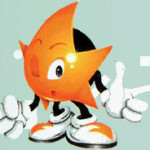 Ristar had a variety of bosses to fight. For all intents and purposes they were all pretty creative. Here’s a closer look at them! 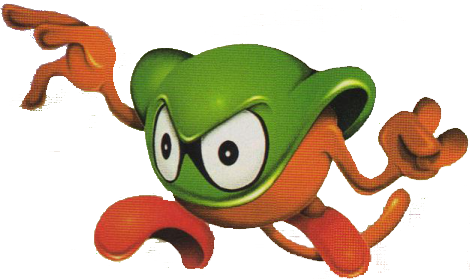 Riho is the boss for the first planet, Flora. He may not look like much, and that’s because…he really isn’t. Riho is the only boss who never really fights Ristar himself, instead opting to control Flora’s Elder and have him fight the battle instead. A few quick bops to the Elder knocks Riho to the ground, where he will lay defenselessly for a moment while Ristar bashes him. Riho isn’t really much of a threat on his own, making him the perfect beginner’s boss. Check out some sprite art from the credits that details the battle below: 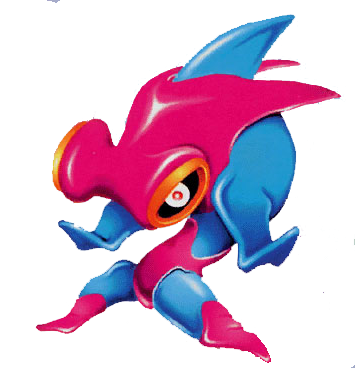 Ohsat is no pushover, and is a huge step up from Riho. After wreaking havok on Undertow and blocking the water regulator valves, he was finally imprisoned by the populace. Ohsat is a pretty cool boss, and one you’ll be able to read more about later in this week’s Weekly Five. We never actually see the inhabitants of Undertow until the credit image below. 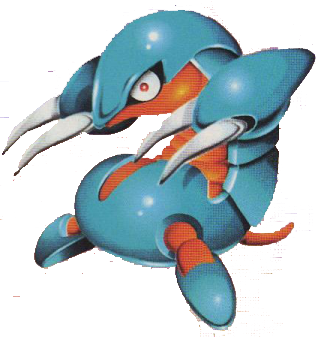 Adahan was once an innocent young inhabitant of Scorch until one of Greedy’s black orbs trapped him in the mining exoskeleton he was hiding in, brainwashing him in the process. In his powerful exoskeleton Adahan subjugated Scorch his people and forced them to build the volcano factor Ristar must later make his way through in the second act of Scorch. Adahan is easily my favorite boss battle in the game. You’ll get to read more about it later this in this week’s Weekly Five. 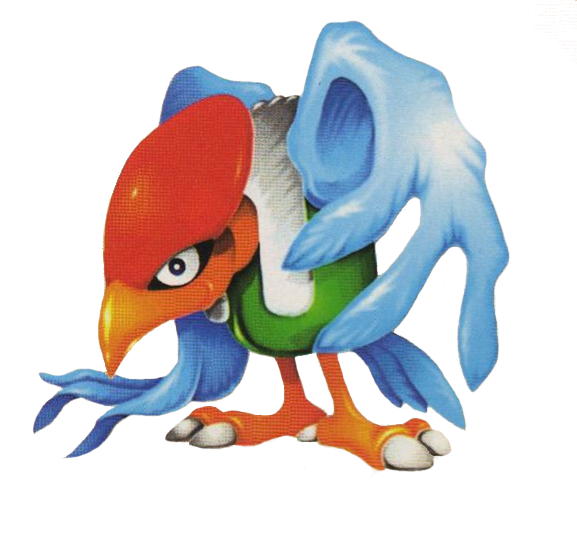 On Awauek’s home planet of Sonata, music is king, so it should come as no surprise that Awauek himself is a music themed boss. He loves to sing, but can only hear very narrow frequencies and as such only loves his own singing and believes everyone else is singing out of tune. Ristar encounters him during  concert on Sonata when Awaueck attacks the singer and tries to take over the performance. His music is so terrible that his notes become weapons that bounce off the ground and harm Ristar. Awaueck is a fun boss, though he doesn’t seem to have much to do with Greedy. If you can keep the concert’s actual performer on stage long enough, he’ll throw you some health! 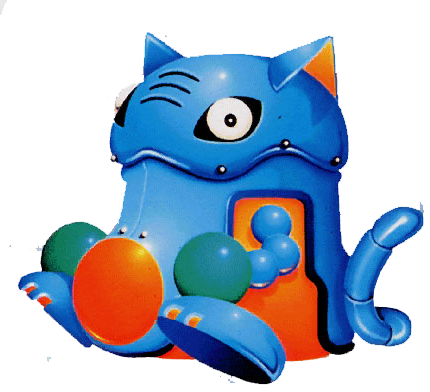 I wouldn’t be surprised if any of you long time Ristar fans don’t recognize Itamor, because he got a massive redesign during Ristar’s localization. This massive candy loving cat monster was sent to Freon by Greedy to ” freeze the planet’s inhabitants and cause their hearts to turn as cold as ice, so they would never be able to enjoy warm happy feelings again”. At least, that’s what Ristar Cluster’s translation of the Japanese manual said. Ristar can only defeat him with the help of a young biped who terrorized him in the first act of Freon. The young biped brings Ristar hot soup that damages Itamor when its thrown in its gaping maw. Below is Itamor’s sprite from the American ending credits. As you can see, he was changed into a monstrous blob like creature in the American release, as well as the young biped who helped Ristar defeat him: 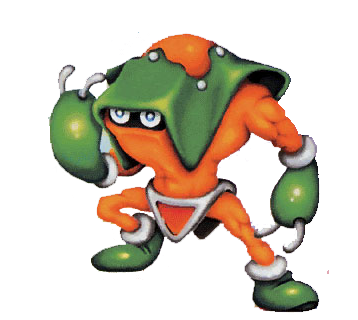 Uranim is the boss of Automaton, and the last thing standing between Ristar and Castle Greedy. He’s a cyborg warrior created by Greedy’s top scientist, Inonis. Despite all of this, Inonis is a bit of a pushover compared to the other bosses, but is also one of the few bosses to survive his encounter with Ristar. 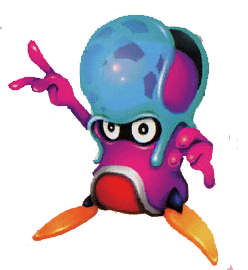 Inonis is one of the big bads, seemingly responsible for much of the technology Greedy has at his disposal, and as a result he is also responsible for spreading Greedy’s evil across the Valdi solar system. After Ristar defeats Uranim, Inonis rescues him and retreats to Castle Greedy. Here he will finally face Ristar in his ultimate creation, a giant mechanical worm called the Eyebar 555. Inonis is Greedy’s last line of defense, and he’s pretty capable of taking Ristar down. 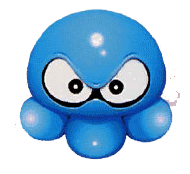 These little monstrosities act as Greedy’s grunts. They are pretty easy to take down in small numbers, but can be a real pain when they start acting in groups. They have caused my death many times in the final battle with Greedy. These things constantly fall out of him as Ristar tries to bring him down. 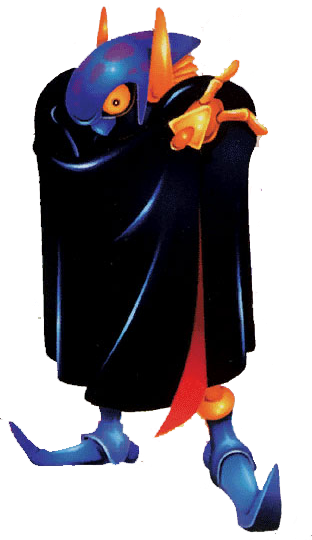 Greedy wants nothing more then to get rid of all warm feelings in the universe. An odd reason for galactic domination, but at least he has some sort of goal as future would-be tyrant of the universe. Greedy yearns for galactic domination and is feared throughout the galaxies he seeks to dominate. Naturally, Ristar will stop him. That’s all I’m really going to say about Greedy. You’ll want to play the game if you want to see what he’s like first hand!

And that’s it for our Ristar edition of Art of SEGA. Hope you enjoyed!

2 responses to “Art of SEGA: Ristar the Shooting Star”