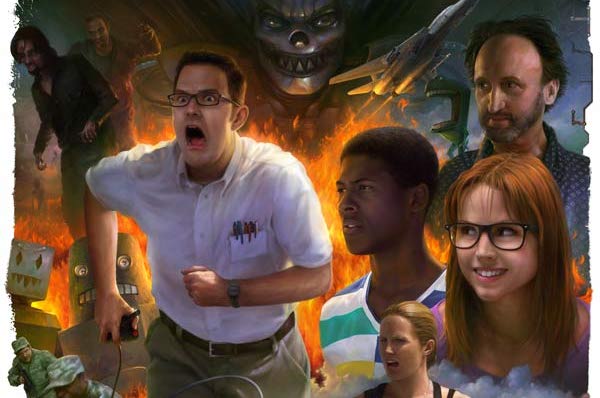 Stretching an internet review show to feature length is nothing new, as sites like That Guy With The Glasses have created a number of 90 minute crossover and standalone movies. Quality of these range from decent to boring, featuring a very low budget and much of the appeal resting on how many internet celebrity cameos and in-jokes they can cram in. Angry Video Game Nerd: The Movie, by comparison, does have the cameos and in-jokes, but what sets it apart from the others is the scale and imagination on display.

The best way to describe the movie is the Wayne’s World movie meets Pee Wee’s Big Adventure and a sampling of the many genres explored in past Cinemassacre projects. Like Wayne’s World, the movie expands the world of the Nerd by giving a context to his videos and showing us what he does when the camera in his basement isn’t rolling. Also, like Wayne’s World, a crooked corporation plans to take advantage of the Nerd for their own profit. The comparisons with the SNL movie ends there, and the comparison is in no way blatant, but I found it to be a great way to expand the web series to a movie length.

The plot is rather complicated, like one of those episodes of The X-Files that you initially can’t wrap your head around, but it all comes together in the end. The Nerd, who goes by no other name, creates internet videos to protect gamers from having to experience awful games for themselves. However, to the Nerd’s disgust, he finds that bad games have risen in popularity thanks to him – now, gamers are actively seeking out bad games to buy and play. A corporation, known as Cockburn Inc., becomes aware of this phenomenon through a female employee named Mandi.

Mandi, in the guise of a nerdy girl, convinces the Nerd and his friend Cooper (the unseen cameraman from the AVGN episodes) to review Eee Tee 2, the modern sequel to the infamous Atari Eee Tee (the “Eee Tee” name was a way to get around the copyright of E.T.). The stipulation for the agreement is that Cockburn Inc. pays for an excavation of the original Atari landfill so the Nerd can prove that the whole thing is a hoax and people should just forget about Eee Tee. That’s only the setup, and what follows is a zany overly complicated plot involving the U.S. Military, Area 51, conspiracy theories, and a giant destructive god.

Although the plot gets a bit too complicated, I wouldn’t hold that as a complaint against the movie. As mentioned, it does all come together in the end, which will surely make the film more cohesive on repeat viewings. Also, throwing zombies, aliens, the military, robots, and a Godzilla-like monster into the mix gives the film a retro video game vibe in the sense that viewers are hopping from scene to scene encountering bizarre enemies just as one would jump from stage to stage in a classic game. My only complaint is that we didn’t see the Nerd battling snakes and bats. What really makes the movie is the cast, which by and large do a great job. James as the Nerd is his usual lovable grumpy self, complaining and critiquing the world around him with witty and flat out disgusting scatological comparisons.

His sidekicks, Cooper and Mandi, both serve as good characters for the Nerd to play off of. Stephen Mendel as General Dark Onward and Time Winters as Dr. Zandor play their parts with a good level of 80’s over the top cheese, and appear in some of the best exchanges with the Nerd. Also strong are the jokes and visual gags, some commenting on the absurdness of situations, while others parodying movie and video game cliches. While there are a handful of scenes that I found to run on for too long, there were always some really funny jokes that save the scene from detracting from the movie.

Light spoilers, proceed with caution: The video game reviewing aspect of the movie plays a small part, but the whole film builds up to the climactic moment when the Nerd does indeed review Eee Tee. While the build up is big, the review itself is fittingly small, comparable to James’s early videos. It’s great to finally hear the Nerd’s thoughts on the game, and I was happy to see a bit of James’s opinion shine through with an upbeat take on the game – despite its flaws. End spoilers.

Overall, Angry Video Game Nerd: The Movie is a fitting culmination of James Rolfe’s filmmaking efforts and a fun ride for fans of the Angry Video Game Nerd web series. The complicated plot and a “throw everything at the screen and see what sticks” mentality, which could have hurt the film, actually works well in offering a buffet of B-movie and video game references. If you have tickets for an upcoming show, you’ll likely have a great time. If you are holding off for the scheduled video-on-demand September 2nd release date or plan to hold off for the DVD and blu-ray release, the movie should be a fun watch on the small screen, though seeing the movie with a theater full of fans can’t be beat. If you’re a fan of the web series, or even if you’ve seen a handful and enjoyed them, Angry Video Game Nerd: The Movie is a: