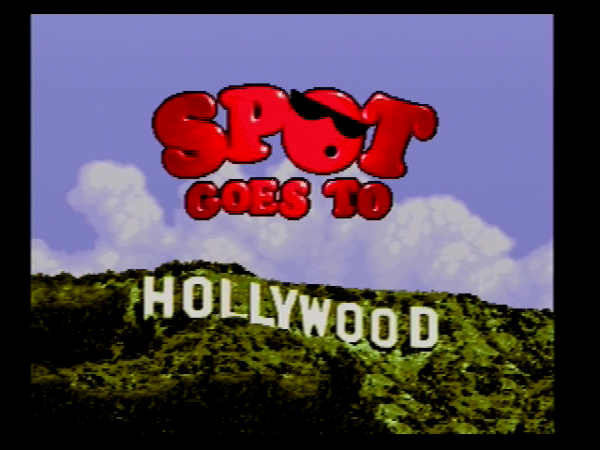 Before we get into the nitty-gritty, I’d like to get into a little bit of history. Back in the 90s, Spot was the mascot for 7-Up soda. Despite being nothing more than an anthropomorphized version of the soda’s iconic red spot given sunglasses, Spot became popular enough to spawn an entire video game franchise. No not just that, he actually starred in a critically acclaimed game, the side scrolling platformer Cool Spot. Spot would end up starring in four different games across nearly a dozen platforms by the time his career ended with Spot Goes to Hollywood.

Spot Goes to Hollywood was released exclusively for the Genesis in 1995, with Super Nintendo and 32X versions soon to follow. As the release of the Saturn and the Playstation shook up the industry that same year, these versions of the game were canceled in favor of Saturn and Playstation ports, which significantly changed the game’s level design, upgraded the graphics and added FMV sequences.

The 32X version quickly faded into gaming history, just another in the long list of canceled 32X games…until the game was dumped to a few repro cart by Lost Classics, a video game website that specializes in selling reproductions. These carts were sold at the Cowlitz Gamers for Kids Expo earlier this year, with all proceeds going to the Children’s Justice & Advocacy Center. Since then, a few of these have popped up on eBay at exorbitant prices, justified by the fact that the ROM still hasn’t been released publicly. I snapped one up for 32X month and…here we are!

The game itself is supposedly around 90 percent complete, though I’m not sure if the game is even that far along. Compared to other leaked 32X ROMs like Virtua Hamster and X-Men, there is a lot of game here but it’s also very clearly incomplete. Many stages are missing tiles, certain items and details like the check point flag are missing, enemy AI is glitchy and will sometimes attack relentlessly, controls for the motorbike in the Tron stage are incomplete, items or Spot himself will occasionally fall through the level geometry, and the game itself crashes regularly. Most disappointingly, the game crashes every time a stage is completed, though the game thankfully has a level select, so it’s very easy to move on to the next stage in spite of this glitch. Every single stage is playable, though, making this the most complete 32X ROM leak to date.

This is essentially a prettier version of the Genesis game. The colors are sharper and much more vibrant, putting the grainier, duller Genesis version to shame. Everything just looks like it’s had a layer of crap shaved off of it, revealing a more detailed and colorful game that actually looks kind of nice. Spot Goes to Hollywood utilizes the same style of pre-rendered graphics popularized by SNES’s Donkey Kong Country, a style that the Genesis had always struggled to replicate effectively. Only a handful of games (mostly from Traveler’s Tales and Blue Sky Software) managed to do pre-rendered graphics well on the Genesis, and Spot Goes to Hollywood definitely wasn’t one of them.

The pre-rendered graphics shine in this version, though. It’s kind of sad that this version never saw the light of day, because it seems pretty clear to me that the developers made these graphics with more advanced hardware in mind and had to downgrade them for the Genesis.

This version’s other major addition is disappointingly fleeting: pseudo 3D special stages in the vein of SEGA super scaler arcade games like Space Harrier. In these stages you automatically fly forward, collecting red chips and flying through blue rings. These stages can be accessed at any time in any stage by pressing the Y button on the six-button pad. Unfortunately, these stages always end about ten seconds after being started, giving you a results screen before booting you back to the main game. I have not yet discovered any other way to access these stages, so I’m not sure if there’s some way to play these stages the way they were intended. It’s likely they were just never fully implemented. If these stages were meant to take place at the end of each stage, it might help explain why stages always crash upon completion.

I readily admit that I’m not all that fond of isometric platformers in general, and Spot Goes to Hollywood is no exception to that. Controlling Spot can feel kind of awkward, since the directions on the d-pad don’t really correspond with the direction Spot will actually go. This is all due to the game trying to simulate a 3D perspective, and it just feels unnatural early on. Eventually I got used to the controls, but it was still a pain attacking enemies and making precise jumps in platforming areas, since the perspective makes it difficult to judge my position and distance in relation to other things in the environment. Slap a heaping helping of frustration caused by the game’s numerous glitches and you’ve got a game that can be downright frustrating to play. Given this frustration, I still haven’t beaten the game, so there could be a lot in this demo that I haven’t seen yet. I’ll be sure to post updates if I find anything notable.

So that’s Spot Goes to Hollywood for 32X. Certainly not the most exciting ROM dump out there, but definitely one of the better ones for 32X. Sure, it’s a game we’ve played before, but at least it’s an actual game and not just some early prototype or tech demo. It should be worth noting that given this was in development alongside the SNES version, this is likely a direct port of that version. There is nothing this game does that the SNES isn’t capable of, so we’re likely also getting the closest we may ever get to a first look of what the SNES version could have been.

I’m sure some Genesis enthusiasts might be wondering if I intend to get this ROM dump and released to the public. The answer to that is…yes! SEGAbits will be releasing the ROM from this cartridge to the public later this year, just as soon as I get the right hardware and figure out how. In the meantime, please enjoy these videos I caught from the game!

One response to “Rise From Your Grave: Spot Goes to Hollywood for the SEGA 32X”