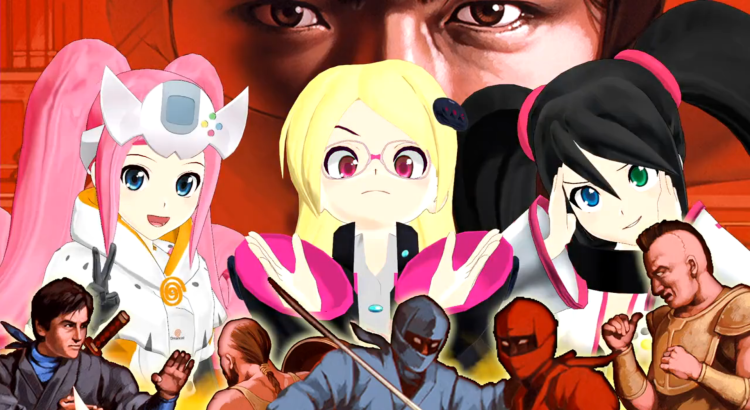 Upon arriving in the game though, Dreamcast has other ideas besides the tasks; and as such she whisks the trio off to a photo booth; much to Saturn’s annoyance, and surprisingly, Mega Drive’s joy! The photo booth’s got a number of frames, including a Shinobi one (seen above), Streets of Rage, Space Harrier, House of the Dead, and more! Mega Drive is initially unamused, but the photo is taken… and Dreamcast attempts to upload it. Saturn tries to stop her, whilst Mega Drive quietly admits that the photo booth was pretty fun. At this point, Saturn decides That’s Enough, and it’s time for the task to begin. Saturn and Dreamcast start off, proving they’re pretty good at inline skating; Mega Drive meanwhile, literally falls flat on her face. Ouch. The tricks then begin, with Saturn losing points for her fanservice, as usual (Darn it Asobin, you have no taste!) and Mega Drive somehow getting the 5 medals through an accidental figure skating routine.

It’s then a matter of getting to the goal and spraying that graffiti. Of course, Mega Drive’s not exactly the best skater, so Asobin gives her a power-up… and the end result is amazing. So amazing, I’m not spoiling it here!

And that’s because I loved this episode, seriously! It’s easily one of my favourites so far; they focused on the game, without cutting out for the sake of a cliffhanger or two parter, and it’s also incredibly funny is some parts; Mega Drive’s power-up in particular made me laugh out loud! In addition, Mega Drive’s character continued to develop, which is always nice to see. There also seems to have been an improvement on a technical level; I thought I noticed this in last week’s episode, but seeing it with the full scale models really hits it home, as the animation and expressions have improved considerably! The expression Saturn’s making in the header image for this article in particular is adorable and I love it and… OK I’ll stop fanboying now.

Something else that goes without saying is that Hideki Naganuma’s awesome soundtrack playing throughout the episode sweetens the deal even further, as you’d expect!

All in all, a great episode! As for next week, looks like the Girls are heading into Phantasy Star Online 2; and there will be Rappys, apparently! Catch you next time, my “Sweet Soul Brothers (and Sisters)!”