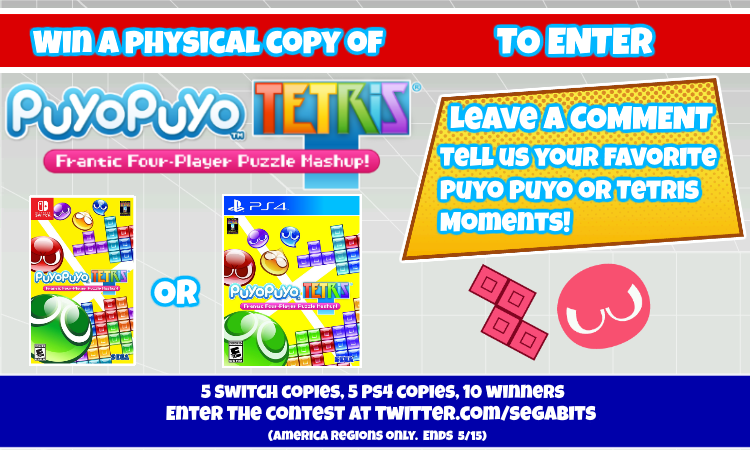 Surprise, we’ve got another contest going on! This time it’s for the puzzle crossover game, Puyo Puyo Tetris. A game by SEGA that combines the long running Puyo Puyo series with the world famous Tetris, in a fun fast mixture where you can play either Puyo Puyo or Tetris, or maybe even both! Puyo Puyo Tetris was originally a title released back in 2014, but recently got a release outside of Japan for western fans to try out for themselves for the Nintendo Switch and Playstation 4.

With this contest, we’re going to do things slightly differently. Unlike our past contests, the copies we’re distributing are physical copies, and we’re distributing both the Playstation 4 and Nintendo Switch versions. There are exactly 5 copies of each version, and a lucky 10 winners can potentially get their hands on a Puyo Puyo Tetris copy for free.

The contest is running on both SEGAbits.com and Twitter.com/SEGAbits, meaning that you can enter in both to double your chances of winning. Should a winner be selected more than once, we will select another winner in one of the contests so that nobody gets more than one copy of the game.

Here’s how to enter:

SEGAbits.com: In the comments section of this post, tell us your favorite Puyo Puyo or Tetris moments. The games, the characters, your experiences, anything is fair game. When leaving your comment, please use a valid email address in the email field so we can contact you. Email addresses are not public. Also it’s recommend to specify which version you want to prevent potential confusion.

Twitter.com/SEGAbits: Retweet the contest tweet and follow SEGAbits on Twitter, and tell us your favorite Puyo Puyo or Tetris moments and mention “Switch” or “PS4” so we know which version you want to win.

The contest will last until May 15 next week at 5PM EST, and this applies to American regions only. Best luck to everyone who’s involved!

Also don’t forget that the Bayonetta PC code giveaway contest is still running until May 11th, so contribute to that too if you have not yet.