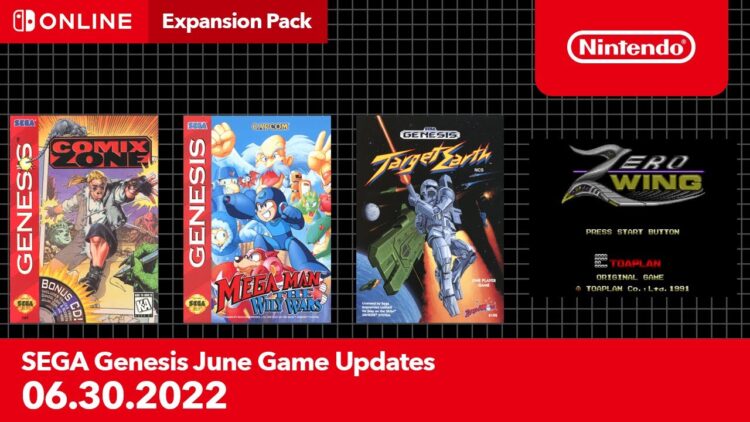 Since the launch of Nintendo Switch Online + Expansion Pack, Nintendo and Sega have been updating the service with new Sega Genesis games every two months. On June 30th 2022, they surprised everyone once again with four more games for subscribers to play. This time, Expansion Pack subscribers now have access to Comix Zone (1995), Mega Man: The Wily Wars (1994), Zero Wing (1991), and Target Earth (1990). As a quick fun fact, this is the first update to the service to feature third party Sega Genesis titles since the initial launch lineup. The same four games have also been added to the Japanese NSO + EP service at the same time.

Comix Zone is a late Genesis/Mega-Drive release from Sega, a darling of Sega Technical Institute, and a mainstay in Sega’s various Sega Genesis compilations over the years. It is also the first game on NSO + EP that supports six-button controllers, though it is not required to play. Comic book illustrator Sketch Turner is spirited off into his own comic book by it’s viliain, Mortus, who draws bad guys into the comic that Sketch must fight as he advances through the pages to escape and stop Mortus. Filled with intense action, challenging puzzles, incredible visual effects, and an exciting grunge rock soundtrack, Comix Zone is a must try for Sega Genesis fans. It may be tough to grasp at first, and incredibly unrelenting, but stick with it and it should be an unforgettable experience.

Mega Man: The Wily Wars is a Genesis re-imagining of Mega Man’s first 3 adventures, best well known on the NES. Each game is rebuilt with all new 16-bit graphics and audio, plus it adds in the new Wily Tower mode, allowing for the Blue Bomber to tackle brand new stages and familiar bosses using any combination of the various weapons and items from Mega Man 1-3. For North America, this was an infamous classic for having only been available occasionally on the Sega Channel on-demand Genesis game service, while the game saw a normal retail release in Japan and Europe. It has now finally come full circle by gracing a modern on-demand game service. It was also previously available on the Sega Genesis Mini and it got a limited edition reprint via Retro-Bit.

Zero Wing is a beloved arcade shump by Toaplan, one of the oldest masters of the genre. In the Western world, the game would later become infamous as the progenitor of “All Your Base Are Belong To Us”, an ancient meme born of the shockingly rough translation of the game’s opening cutscene from Japanese to English. This legendary moment is even highlighted in Nintendo of America’s own trailer for this NSO + EP update. Beyond that, the game is a tough, but fun side scrolling shooter with large, chaotic bosses at every turn. Like Mega Man: The Wily Wars, Zero Wing was only released in Japan and Europe originally and later saw a limited edition reprint from Retro-Bit. Unlike Mega Man, it was never available on Sega Channel, to our knowledge, nor was it part of the Sega Genesis Mini.

Finally, Target Earth is a challenging space run-and-gun featuring giant mech suits. You battle enemy mechs and battleships as they begin an all-out assault on planet Earth with a customizable loadout of weapons. You’ll have to pick the best weapons for each given situation while carefully platforming on and off Earth, oftentimes in zero-g. This game is actually the first in the Assault Suit Leynos series by Masaya and was even remade in 2016 for PS4 and PC. It was also available on the Japanese version of the Mega-Drive Mini, along with Target Earth when you set the console’s language to English.

Be sure to let us know in the comments what your favorite Genesis/Mega-Drive games from this update are and what games you hope to see added in the future. I know I can think of a couple of games I’d want to have their time again… FOR GREAT JUSTICE!!