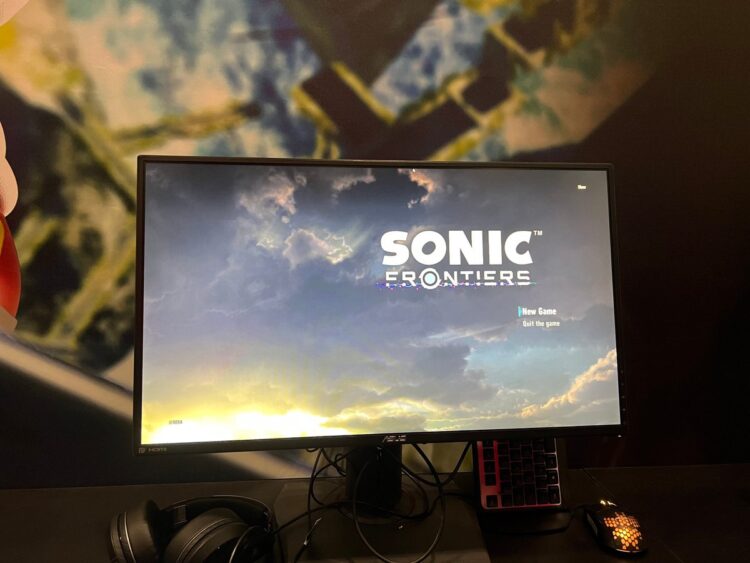 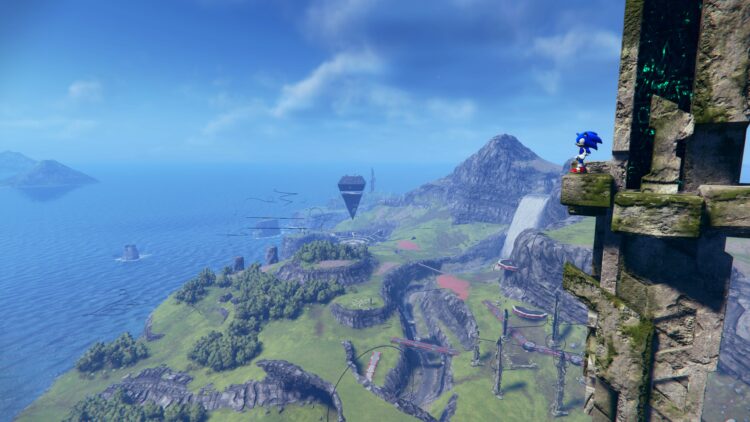 By now every fan who has been watching videos of the public demos knows how the game opens. Sonic wakes up wondering what has happened to his friends and a mysterious voice tells him to proceed on his adventure. I knew there was a 15 minute timer and I was not keen on lining up again. By the time I finally sat down with the game, the line was almost (cy)looping around itself! I avoided the opening Green Hill Zone and beelined straight ahead, avoiding a couple of cannon fodder goons to make my way to face the first proper mini-boss of the game, Ninja. This boss is pretty straight forward. Punch at it repeatedly, but if you get cocky you can find yourself punished quickly. After a few exchanges, I defeated the boss but not without a couple of hits. Going further you’re introduced to the cyloop feature to extinguish some torches and then you go against another mini-boss, this time it’s Tower. 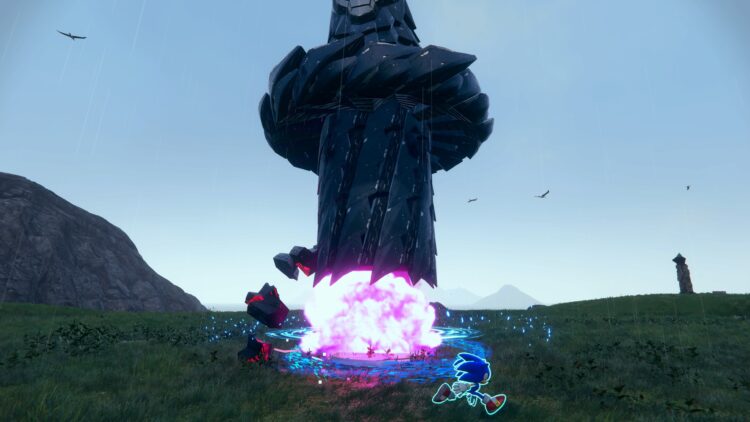 One thing the game establishes early on is how much thought is put into designing its various elements. While you could still go completely crazy punching Tower and lower its head to finish it off, it’s a better idea to use the cyloop ability to destroy it. I found later on that there is a second Tower fight in another area, this time over a smaller arena and a bottomless pit as opposed to the first Tower fight in a big open field. These changes in location will give repeating elements like enemy battles longevity by ramping up the difficulty. 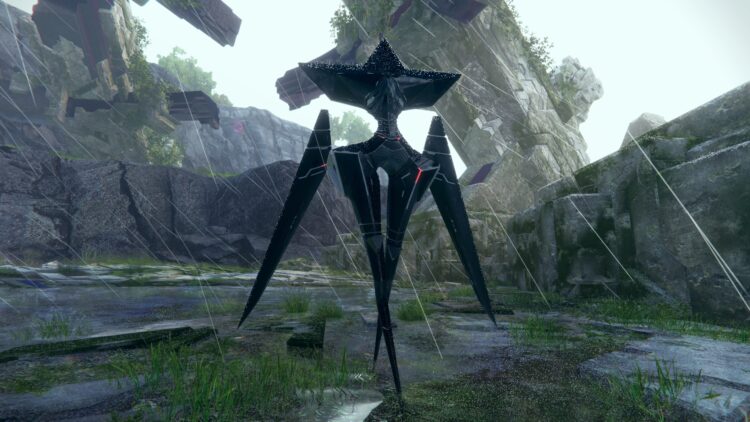 By now I was starting to get accustomed to the controls and as everyone has been saying, they are so precise in the open world that it’s great we finally have a Sonic that listens to player input so well! Cylooping enemies felt great and my only real issue with it is when the camera gets too zoomed if Sonic is too close to a wall or a larger enemy. Thanks to the controls I had a great time just exploring the open world, Sonic felt so free as you could climb up towers or chain homing attacks together. However, what was interesting was how different the controls became once I entered my first Cyberspace stage, Sky Sanctuary, or 1-2 as the demo put it. Blasting with some strong Dance music, these stages are all about moving forward and the more you try to play it at your own leisurely pace the more you’d end up hating it. It’s an interesting change that while the open world is about you taking your time, these stages force you to play fast. Not only that, but you’ll also have to be careful how you utilise your boosting because the air dash helped me reach boost rings and rails more often than once. 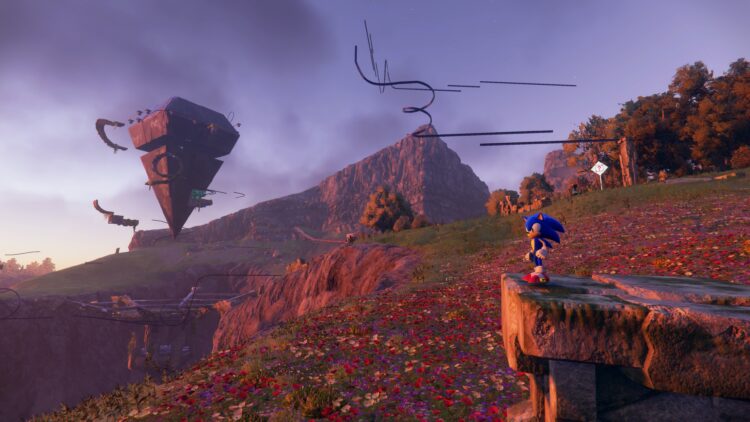 After finishing the first mandatory Cyberspace stage, I gained access to the true Open Zone area of Sonic Frontiers and I was graced with so many options in front of me. There was the lumbering giant Asura, there were Koco Elders wanting to talk to me, there were plenty of Cyberspace Portals, there were Chaos Emerald vaults and it came to my attention quite quickly that this game is jam packed with things to do in every direction. There’s a grind rail there? Well you’ll have to time your jumps and boosts! There’s another Tower mini-boss waiting to be beaten? And here’s a Cyberspace entrance! There was so much to do I would be paralyzed by choice if it was not for the demo timer clicking down. I rushed to another Cyberspace Portal and was thrown into a 2D rendition of Green Hill Zone. 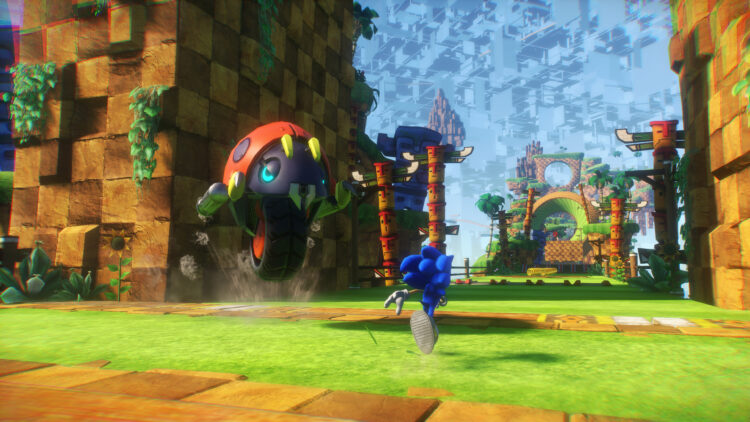 There’s been much made out about how Sonic Frontiers reuses level layouts from previous Sonic games but I could not figure out which levels were being reused, perhaps it was a mix of Sonic the Hedgehog 1‘s layout or perhaps it was Sonic Generations, I could not quite figure out. Unfortunately this was my first disappointment with the demo. It’s curious but Open Zone Sonic, 3D Cyberspace Sonic and 2D Cyberspace Sonic all seem to control differently and do not share consistent physics between themselves. Unlike 3D Cyberspace stages that felt like slightly snappier and more forgiving Sonic Generations stages, in these 2D stages the downgrade in the ability of the boost really hurt the flow of level. I could not test it in the 3D stages, but in the 2D ones even boosting into enemies would hurt Sonic. 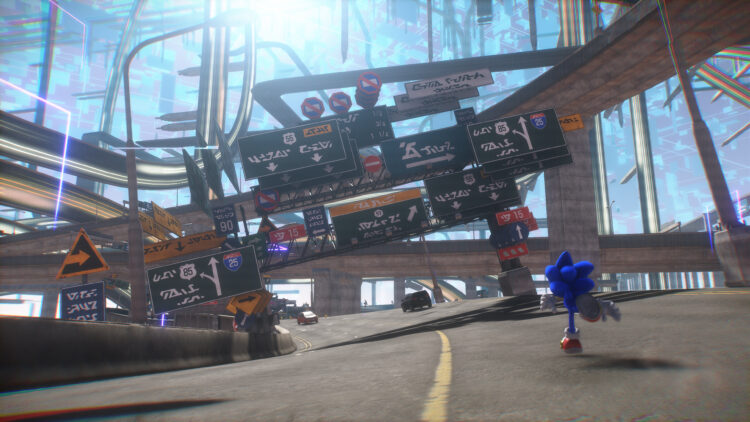 While in previous boost Sonic games, even if you had to fight with the game a bit, generally boosting would fix whatever issues you were having. That was not the case here and I find myself struggling to get a natural flow going. You could roll by pushing the analogue stick down, but I neither found it comfortable or useful in these levels. After finishing the stage, I was greeted with a short cutscene of Eggman being stuck in the digital dimension and while I could not see the full scene since my demo time ran out, I noticed Mike Pollock’s voice direction was slightly different from other Sonic games. Much like Roger Craig Smith’s Sonic, there seems to be a strong push to have actual voice direction here. 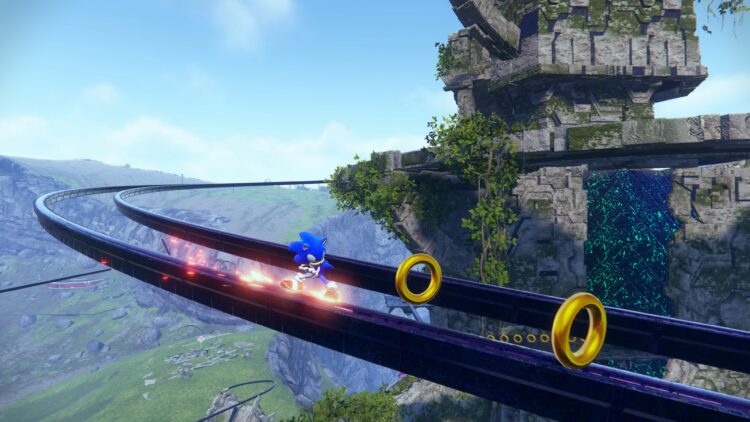 Thankfully, the queue had since died down and I managed to try the demo another two times. On my second playthrough I found another issue that I could not quite forgive so easily and that was how some rocky terrain that feel scaleable are definitely not. The game forces you to stay on green patches of grass as the road and trying to move up higher on the mountain side brings Sonic crashing down and forced me to die in the sea a few times. It felts slightly contrary to the free flowing movement you find in the Open Zone, especially after I managed to climb to the top of a huge tower. There was something quite frustrating seeing Sonic slipping to his doom with a rough animation that just added to my annoyance. 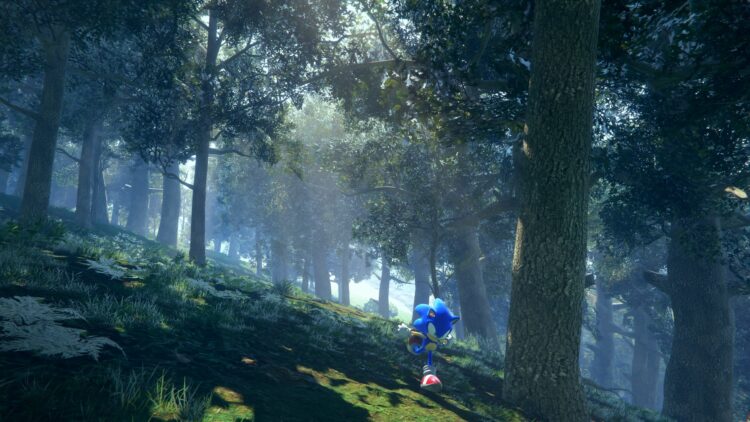 But it was not all a rough ride in my later playthroughs. I genuinely loved exploring the Open Zone and even though I was on a timer, I often find myself getting distracted by smaller enemies popping up in my path, grinding some rails that took me into some undiscovered areas in the sky and digging for treasure using the cyloop. In a much more relaxed setting, I could see myself taking it easy and appreciating all the small areas in the game because there is so much to it. While venturing through the first island, it became quite apparent that there are more Cyberspace Portals then I figured originally and I could see the number swelling to 15 to 20 easily. In fact, there was one that required something other than Portal Gears that you gather by beating the bosses, instead this portal I came across needed you to get tokens and open more fishing spots from our good old friend Big the Cat. This game’s Open Zone is deceptively big with more abilities that you might not figure you had without experimenting. I was boosting using the cyloop, using Sonic’s bounce move from Sonic Adventure 2 by holding the stomp button and the drop dash ability from Sonic Mania. Sadly, as fun as the Open Zone is, the pop in is a definite distraction, especially when you’re wandering into a forest and the lighting dramatically changes. I hope they polish this up before release. 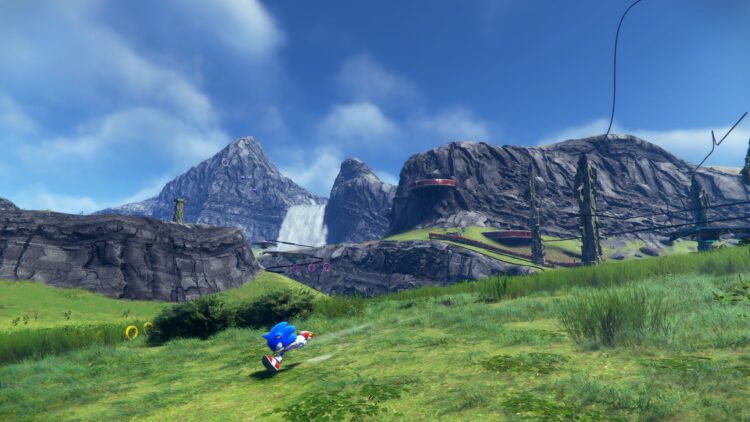 On my final playthrough I managed to locate another Green Hill Zone act, only this time in 3D. Unlike the 2D one, this I could definitely tell was based primarily on Sonic Generations‘ modern act. After quickly finishing it, I began exploring the Open Zone and the highlight of this playthrough caught me by surprise. As I was zipping around looking for another Cyberspace Portal, in the sky I noticed something moving in the distance and went to investigate. Before too long I noticed it was another boss in the area, Squid, and thought I would have to wait for a specific point to engage. Without realising it, I run too close to the flying beast and it began attacking me, catching me by surprise when the camera zoomed into it’s face. When I originally saw this boss fight, I figured it was another rehash of established bosses from previous Sonic games but the new coat of paint given, with the camera shifting around the Open Zone, helped to give this boss a completely fresh feel. After managing to avoid its bullets and landing a hit on its face, it turned into a mini arena fight, before repeating the first phase again. Before long, Sonic had made short work of the squid, I was greeted with more Portal Gears and the demo ended. 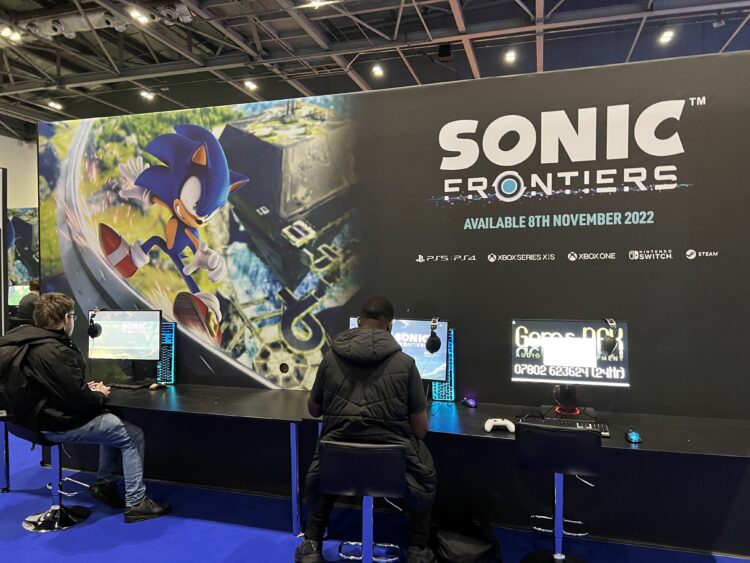 And with that, my playtime with Sonic Frontiers came to a close. I ended up clocking over 45 minutes on this demo and loved many moments to it, but there were some rough edges around it. But for me, the positives outweighed the negatives so much that I was able to look past the annoying pop-in and the off-putting 2D physics because I was having so much fun with every other element of the game. The bosses all have their own unique patterns that you have to consider and can have several ways to take them down. The exploration that Sonic games were famed for is back but now, there is a reason to check every different route in the Open Zone and the combat felt fast and snappy. The 3D Cyberspace stages can be a lot of fun and if you’re trying to speed run them, I can see people getting lost in them. I cannot speak how the final game will be, but from what I have played I am intrigued and excited to explore more in Sonic Frontiers. If what we see in the first hour is consistent through out the rest of the game, this could be one of the most exciting Sonic games in decades.