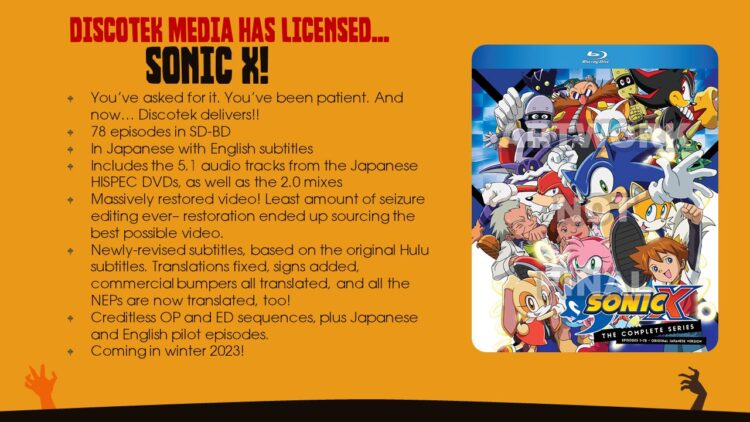 Fans have asked nicely. They begged. They asked rudely! And in the end, Discotek Media has delivered! That’s right, the Japanese version of Sonic X is finally releasing to home video in America! While Discotek has released the full english dubbed run of the series on DVD and SD on Blu-ray, the Japanese version was conspicuously absent.

The release, due out winter 2023, includes the full series in Japanese with newly revised subtitles based on the original Hulu subtitles with translations fixed and signs added. Additionally, all the original bumpers and NEPs (whatever those are) have been translated as well. Video will see a massive upgrade and audio will be presented in 5.1 and 2.0 mixes. Bonuses will include creditless opening and ending sequences as well as the Japanese and English pilot episodes.

Big oof! That’s a lot of content and upgrades! With this release, every form of Sonic animated media has been released to home media. However, a remastered release of the Sonic OVA would be nice. Guess it’s time to bother Discotek about the next release!