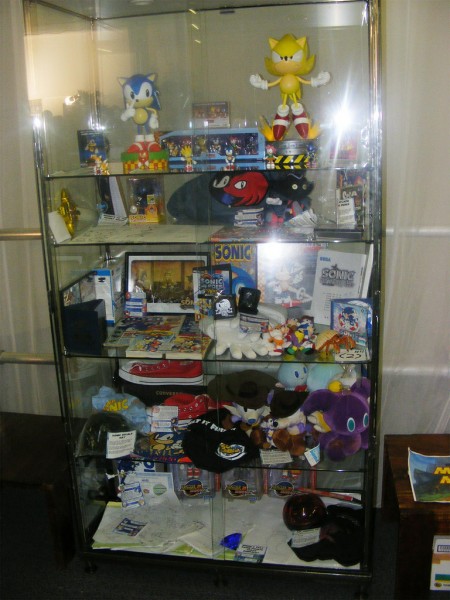 Just like last year there was a ‘No Merch Zone’ present, which consists of a large glass cabinet of Sonic related treasures. There was some of the same stuff from last year but mostly completely new stuff, so here’s a bunch of photos. Apologies the photos are not quite so good this time but you’ll get the idea. Read more 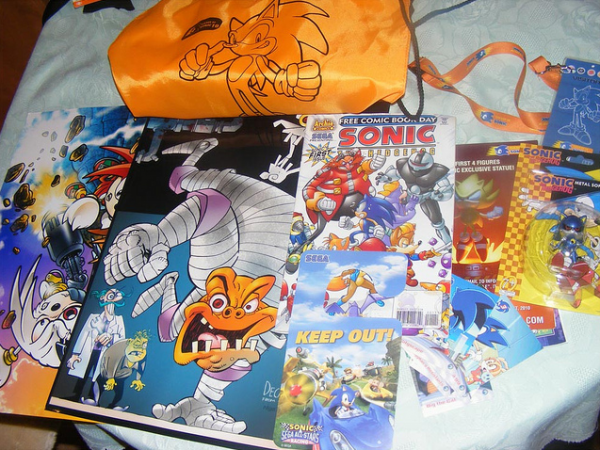 Instead of making a couple huge articles like last year, I’m going to be posting a bunch of shorter articles about last Saturday’s brilliant Summer of Sonic convention. Safe to say they really outdid themselves this year. To kick off, here’s what I brought back from there. A bit silly that I’m starting my coverage with the last photo I took but never mind!

So a bulk of it is from the goodie bag that was given away to the first few hundred entrants with tickets (people without tickets couldn’t even get in until an hour or two after it opened! Sucks to be them I guess :E). My girlfriend also got a ticket just before the registration ended because she wanted to tag along even though she’s not that big into Sonic (she enjoyed it though, so that’s a relief lol) and when we entered from the HUGE queue we got the last bag! However they did have hundreds more of the highlight of the bag; the Metal Sonic figure, to give away to people that entered (tickets or not I believe) right through till about 4pm. More after the jump..

Summer of Sonic is a yearly event for Sonic fans, sponsored by SEGA and ran by the guys over at Sonic Stadium and Sonic Wrecks. I have been told the event has nothing to do with Summer of Sam and that I watch too many serial killer related movies. Sort of disappointed now.

The guys have launched the Summer of Sonic site, which gives you more information on the event. You can’t register yet.