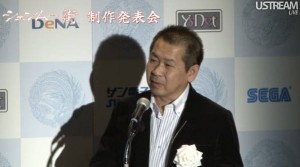 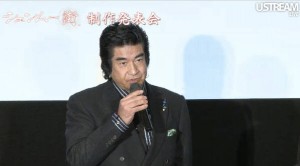 [Two mighty men walk on stage, only one leaves alive]

The press event for Shenmue City has come to a close. What did we learn? Well not too much, but more than we knew before. The event did have a lot of ‘looking back’ at the release of Shenmue, then Sunsoft saying “We will put our full power behind Shenmue Gai (City).” How nice.

Yu Suzuki (along with Takeuchi) took the stage, to explain what Shenmue City will have to offer. They show the game, you are a student in the Hazuki  Dojo and play along side Ryo. They showed the users ‘My Page’ that gives you a list of events (missions), Kung Fu and ‘Search’ options. Search lets you find more events, Yu explains that after you do most events, you will fight a boss in the end to advance to the next stage. In the Kung Fu tab, there will be a move list that you can master.

He also explained that sometimes you will find a ‘Match’ icon in your My Page, this is when someone is challenging you in the game, but this can only happen when you ‘level up’ enough to have your own Dojo. Depending on your success, your Dojo will be ranked, the ranks actually follow the Virtua Fighter ranking system.

You will also be able to take part time jobs, even manage a You Arcade shop of your own. Also said at the event is that the game will have a mobile and PC version, I assume you can sign in your account on the go and from a PC if you would like, with the same account.

Funny moment in the event was when they took questions from the press, the first question was about Shenmue 3 and the PR person at the event stated that questions have to be about Shenmue City. Bummer. Famitsu asked what are the ‘social aspects’ of the game. Yu said the social parts are in the fights, you can send messages to people around the fighting areas. Doesn’t sound like you will be able to ‘explore’ the city, sounds menu based and if that is true that sucks.  It is also confirmed that Shenmue City only takes place (as of now) during Chapter one (aka first game), though he did say the game could go beyond this when the game gets updated.

As for Segata Sanshiro (real name: Hiroshi Fujioka), he went on stage and announced he was reprising his role as Iwao Hazuki, Ryo Hazuki’s father.

Yu said there is a story after Shenmue 2 he wants to deliver to players, but he is not sure if he will be able to do this and doesn’t make any promises. When someone from the press asked him if he planned on finishing up the 16 chapters of his saga, he corrected him and said there where actually ’11 scenarios’. Again, he wants to and will do it in any format he can. SEGA, pick up your slack bros!

Shenmue City is being directed by Yu Suzuki