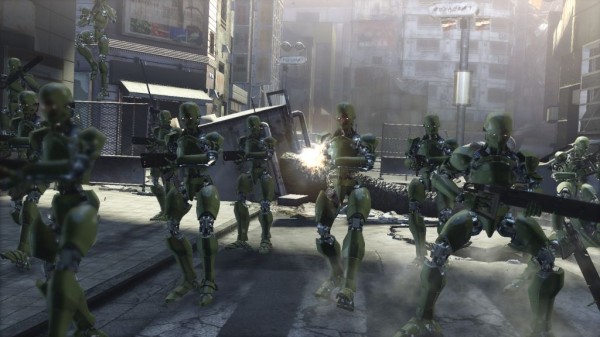 What was shown was in pre-alpha code so it was a little rough. As you fight through a level with your squad, you have a “trust meter” which fluctuates depending on your actions. Mainly on how well you fight the enemy and and how well you treat your other squad members. Arrows will show the trust meter. Up meaning the trust is going up while down is down of course. The character A.I is done rather well this way. They may not listen if they don’t trust you, or if the situation is too dangerous for them. This occurred during gameplay as Dan got shot up too much and crawled to cover. He yelled to his squad for help, but there was too much fire around you, so your teammates tell you that they can’t get around all the firing. 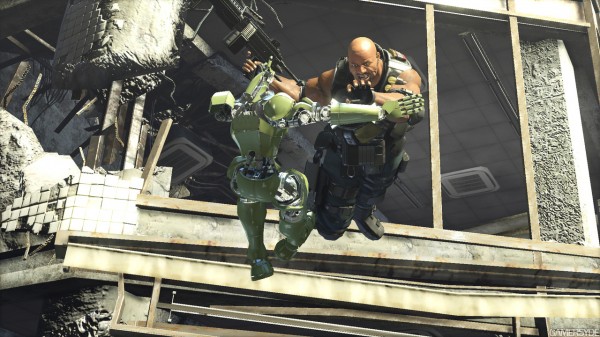 Another feature shown to us was Procedural damage. When shot, the robots will react to damage differently depending on where they are shot. If you shoot a robot’s legs, it will crawl toward you Terminator style and still try to shoot you. Shoot off an arm and make it drop its gun and it will just grab its gun with the good arm and keep firing. My favorite is what the developer showed us as he shot off the head of a robot and it started to blindly fire everywhere, killing one of its robot teammates. It will even swat at robots or enemies nearby.

The game also features full voice support. Whether it’s through Kinect or your standard mic is up to the player. In this early version it didn’t work too well (mainly due to the loud levels of sound), but provided some humor. The player was shouting for Rachel (a red-headed British squadmate) to provide backup. She wouldn’t respond. He kept yelling for her and finally she spoke up and said “learn to speak some bloody English mate!”

Scattered throughout the game are ammo transits where you can stock up on ammo, new weapons, health and new skills. You earn credits from the enemies you destroy. You’ll need these credits to stock up when you fight the large bosses in the game. One such boss was a giant mech spider that was in the middle of Shibuya station. Large enemies such as these can only be destroyed by attacking their white armor with missiles. When the plates are destroyed, it exposes its dry cells that you can then take down with regular gunfire. As the boss went down for the count, it was time for our Q&A to begin. 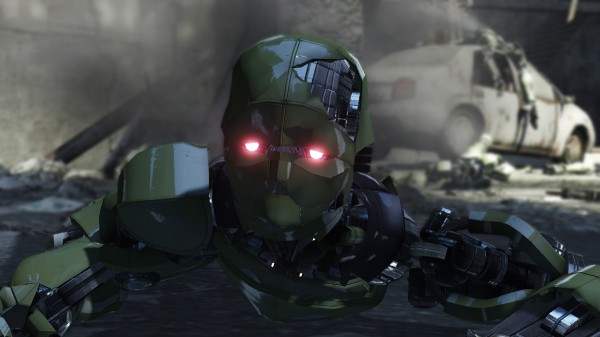 Seeing as how this game has the same producer from the Yakuza series, will the game feature an open world? Possibly with mini games?

It’s not open world. It’s very very tied into its story. Very close knit. You can expect to do various things lke look around, and use the terminals when you’re not fighting.

Any multiplayer or co-op?

Yes, it will have multiplayer. I can’t say anymore than that at this time. We are preparing various kinds of vs or co-op modes unrelated to the campaign.

Since you have several different teammates to select from, will it affect the story differently depending on who you pick?

The story is always the same, but the trust level will trigger variations in events.

Any reason why the characters can act independently due to trust level? Shouldn’t they be following orders?

Being from different nationalities, they are each fighting for their own cause. They’ve never really met each other until now and don’t know each other really well. Some even suspect each other of being double agents. The trust meter helps you encourage a relationship with your squad.

The story is unique as it involves different nationalities invading a Japan that has shut itself off from the rest of the world. How did that come about?

We thought it was interesting to set the story up with these foreign soldiers infiltrating Japan. Delivering something unique by envisioning what Japan could be like in 2080 and give gamers a taste of infiltrating the country.

One response to “E3: Binary Domain Preview and Q&A”