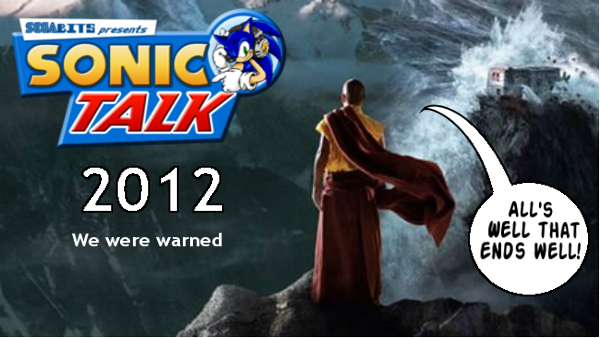 We have a great show in this week’s Sonic Talk. Not only does GX Echidna return, but he brings Evil Dr. Reef with him. It’s a Sonic Talk/Spindash combo! We skip the news and head straight into our 2012 retrospective of all things Sonic. While there wasn’t a major Sonic title out this year, there was still plenty to satisfy fans of the blue blur. We’ll look back at Sonic 4-2, Sonic Jump and of course Sonic & All-Stars Racing Transformed. Then, we’ll be heading into Comic Talk where we’ll discuss this past year’s storylines and the impact the Penders case is now having on the book. Then, we end the show with our 2013 predictions. Read on for show notes or to comment in the thread.

Warning to the kiddies, this one’s uncensored so any naughty words are staying in.

Sonic 4: Episode 2 – Was this a true sequel to Sonic 4-1, or more of it’s own game? We look back at what worked and what didn’t in this sequel of a sequel.

Sonic Jump – Does all the new updates mean I should make a revised review? Does anyone even care?

Sonic & All-Stars Racing Transformed – Wii U Version selling the best despite the fact it was broken at launch. How are the sales? Will it have long legs over time?

Oh no! Penders lawsuit is hurting the comic! No more Penders characters. What will it mean for Echidna fans and who’s really to blame?

Finally, A look forward into 2013. The “World’s Collide” story arch that brings together Sonic and Mega Man will be starting very soon and is the rumor of five downloadable and one Retail Sonic game true? We’ll speculate on those and make some crazy predictions.

Sonic Talk #22 Getting fat from eating your black hearts