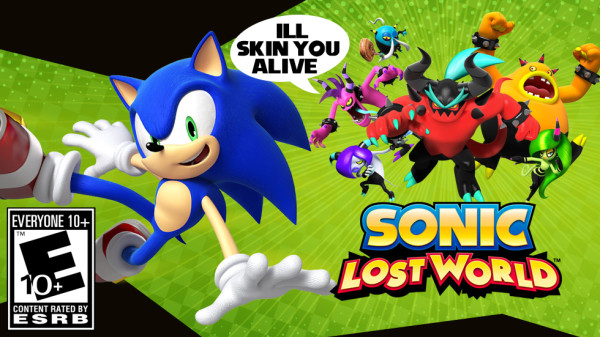 The ESRB has finally posted its rating for Sonic Lost World and it decided that the game is rated E 10+, for ‘aggressive language’.  Before you freak out, its not that big of a deal, check out some of the lines they consider ‘aggressive’ below.

Rating Summary: In this action platformer, players control Sonic the Hedgehog as he attempts to stop an evil villain’s plans. As players zoom through fantastical landscapes, they collect items (e.g., gold rings and power-ups), avoid hazards, and use spin attacks to defeat robotic enemies; enemies break apart amid colorful explosions. During gameplay, characters sometimes use aggressive language (e.g., “You’re going home in a box,” ‘I’m going to skin you alive,’ and ‘I long for death’s cold embrace.’). Cutscenes also depict laser fire and explosions, as well as dialogue that references violence (e.g., “I’ll get fat from eating your black hearts,” “One second you’re contemplating genocide,” and “As long as I can still strangle a Zeti, my hands are fine.”).