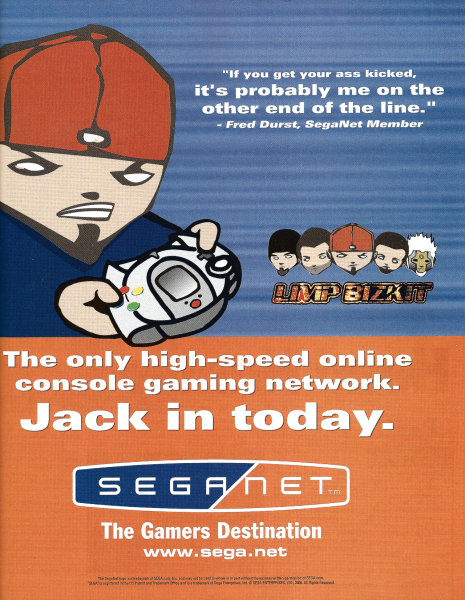 Those who attended the shows had the opportunity to face off against a musician from Limp Bizkit in the Dreamcast version of Ultimate Fighting Championship, a session which was broadcast on a jumbo screen to an audience of fellow concertgoers. Signed Dreamcast systems were given away as prizes. A series of trucks, coined with the moniker “SEGA’s Mobile Assault Tour,” were also on site, offering those present the opportunity to play the likes of NFL 2K1, World Series Baseball 2K1, Space Channel 5, and Metropolis Street Racer.

SEGA’s then-VP of Marketing, Julia Miller, was enthusiastic about the collaboration.

“Limp Bizkit fans are parallel with our core audience of online gamers,” she said. “The tour is a key component in our crusade to ensure SegaNet is everywhere our target customer is.”

The late 1990s to the early 2000s still feel to me like such a magical and unreal period of time. Being reminded of and then going back to research things like this only add to the unbelievable charm that exists in my mind of 1999 and 2000. May both SEGA, and Limp Bizkit, continue to press on, doing what they do, whilst riding, steadfast, into the sunset.