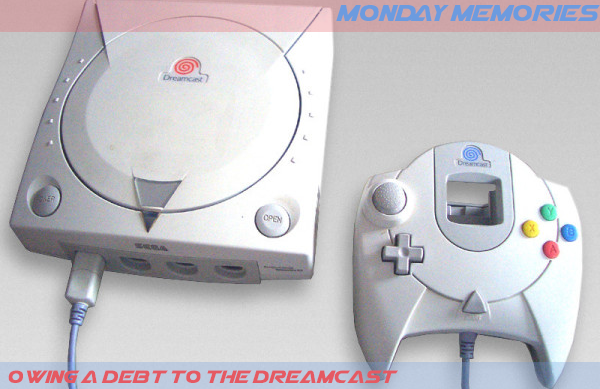 Y’see, I originally imported the Sega Dreamcast about 6 months prior to launch. I only got about 3 games with it, but it still cost me about $500 and this was back when I was working part time. Luckily, the indie video game store I imported it from was my local hangout at the time (sadly, it’s gone now) and the owners let me have store credit to pay it off (I already had to credit to deal with so this just added to it). Even when I got a full time job a few months later, I still had a fair amount of cash left to go. Plus, it didn’t help that my import wasn’t worth much in trade since most of the best games were coming over when I switched to an American system at launch.

Fortunately, the store owner had a good idea of how I could pay off some of the debt. The new retail store I worked at gave me 10 percent off everything, including any large electronics. Plus, there was no limit on any said item (with the rise of huge console launches and more limited supply, these rules have since changed). My retail store got a ton in while the indie store didn’t get enough supply to meet its pre-orders and some were going to have to wait weeks for their system.

I asked my store manager if it was okay for me to purchase about 5 or 6 of the non pre-order stock. He said it was perfectly fine and I got the go-ahead to do it. I was able to buy a fair amount of systems from my store (except for those pre-ordered of course) and sell them to the indy store at no extra cost. This helped them cover enough consoles for pre-order and in turn, they took about $100 off my credit. The indie store met  their pre-orders, my store got to sell out their stock and everybody’s happy. Well, except for any non pre-order folk looking for a system in my store.

So, I celebrated my Dreamcast launch by helping a small company cover their launch, picked up my American DC while trading in my import, sold out the stock in my store and helped pay off some of my debt.

One response to “SEGA Memories: Owing a debt to the SEGA Dreamcast”