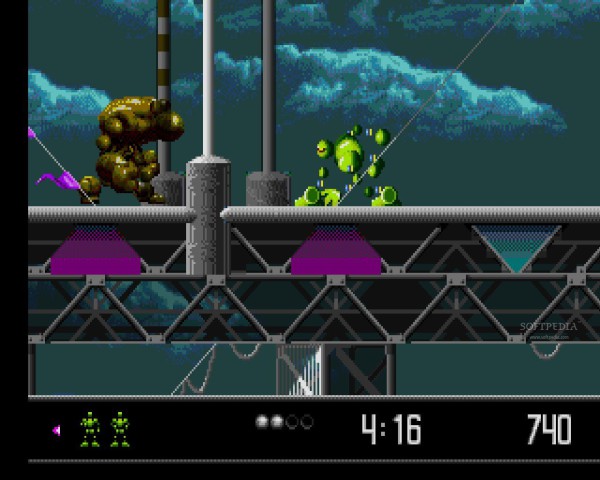 The visuals and atmosphere of the experience were top notch for their time. Each piece of Vectorman’s character was individually animated, giving him a fluid and dynamic look.

Even the game’s cold and somewhat mechanical setting has a sense of beauty to it.

Scrolling and often interactive objects in both the foreground and background of several levels provide them with a pulse, and the use of vibrant color and some surprisingly convincing weather effects, such as the snowfall in Arctic Ridge, ensures that even the game’s cold and somewhat mechanical setting has a sense of beauty to it.

Playing Vectorman today, I actually got a bit of a Metroid Prime vibe from the atmospherics, which is quite an accomplishment given how great that series is at creating a setting that’s feels both cold and isolated as well as beautiful and absorbing in pretty much equal measure.

I actually got a bit of a Metroid Prime vibe from the atmospherics, which is quite an accomplishment

The soundtrack’s use of guitar-sounding riffs and industrial noise always conveys a sense of urgency, and often fits perfectly with the levels in which its featured. Tidal Surge remains one of my favorite pieces from the Genesis era and definitely the game’s standout track, but the others are no slouches either, with all the songs meshing incredibly well with the visuals despite one or two repeats. 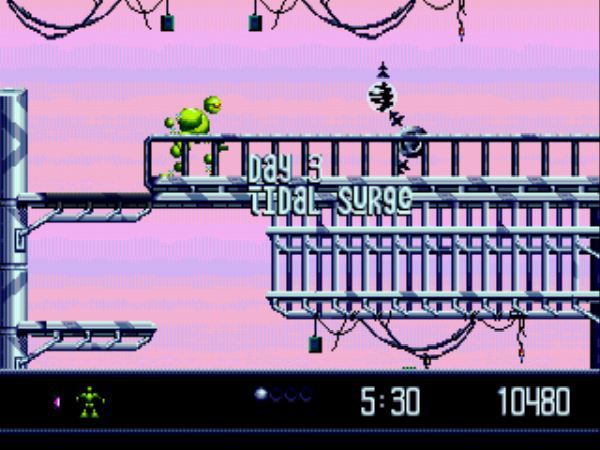 The gameplay takes the form of a score-driven shooter. Vectorman has the power to fire blasts in any direction, including diagonally. It proves to be a key asset, as many of the enemies and bosses he faces off against move incredibly quickly. Ranging from machines to sludge monsters and flying insects, there’s no shortage of victims for Vectorman’s arsenal of moves, many of which take the form of powerups broken out of TV sets littered throughout the levels.

While some of these transformations are more useful than others, it’s always fun to see what possibilities the game has in store for the character next.

These add variety to the shooting, each one replacing his default cannon for a short period of time. Also there to spice things up are items which change Vectorman into different forms, and while some of these transformations are more useful than others, it’s always fun to see what possibilities the game has in store for the character next.

While Vectorman‘s variety helps it to stand apart, there are instances were BlueSky Software missteps. Certain mini-levels, which take on the form of scrollable boss fights, rely heavily on trial and error, switching up the gameplay suddenly and giving you little chance to figure out exactly what you’re expected to do as these fairly unforgiving sections eat up your lives. With the game lacking a password system or any ability to save, it’s frustrating when the arsenal of Lives you’ve built up in the normal levels is eliminated one by one in these three mini-boss fights, which don’t add much to the game and feel out of place. 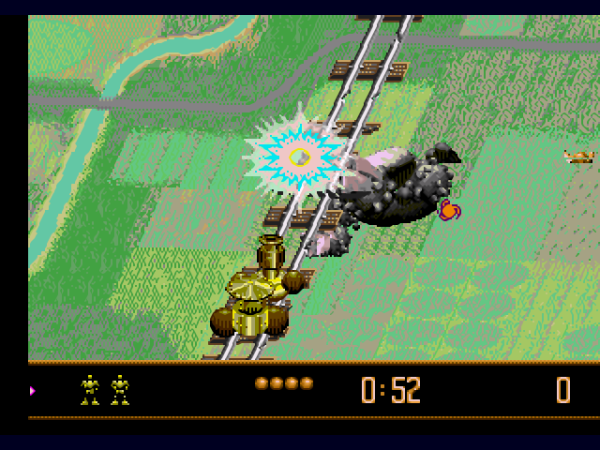 But this issue, along with one or two areas (Bamboo Mill and Hydroponic Lab) that don’t seem quite as inspired or pretty as the rest, doesn’t stop Vectorman from being an A-rated sidescroller. With more than enough levels to explore, along with a great atmosphere and some of the Genesis’ best visuals, it was easy to recommend Vectorman back then, and it remains a worthwhile play today.

It was easy to recommend Vectorman back then, and it remains a worthwhile play today.

Though an ill-advised PS2 franchise revival was thankfully given the axe, I think it would be cool to see the series brought back for a Vectorman 3.

If not, the first game at least manages to stand the test of time incredibly well. 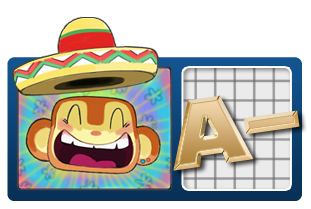 “Despite some small frustrations, a fun and iconic Genesis classic.”