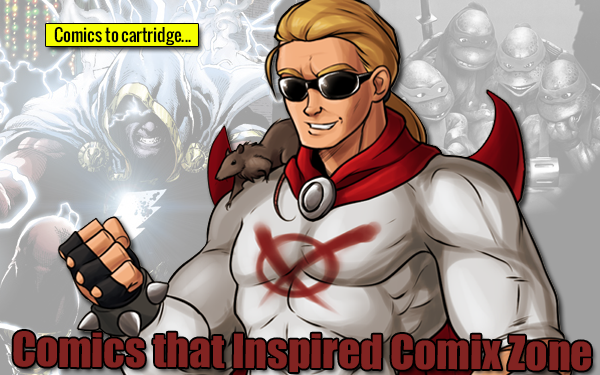 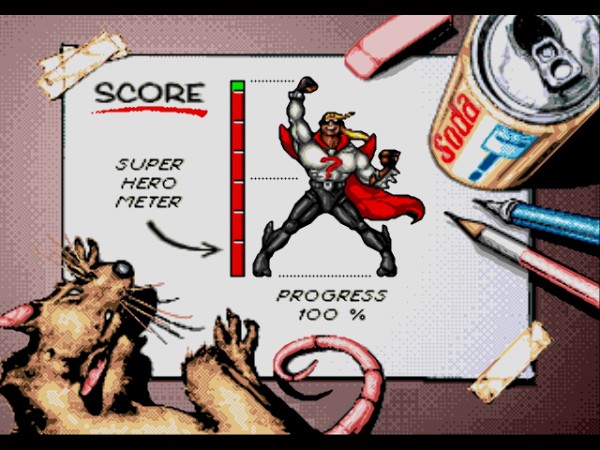 In the early stages of production, Sketch Turner was known as Joe Pencil, a geeky comic book artist that gets trapped in the Comix Zone. In the Comix Zone he will be able to transform into a powerful being, no longer being the weak geek that he used to be.

“You will notice in the demo that the main character’s name was Joe Pencil, and he was pretty geeky-looking. I liked the classic comic book angle of a scrawny kid getting transformed into a powerful superhero” – Peter Morawiec told SEGA-16.

This is actually a popularized theme thanks to the super hero Captain Marvel, a character that debuted in Whiz Comics #2 in 1940. Unlike most super heroes, the alter ego of Captain Marvel is actually a 12-year-old boy named Billy Batson. He was a homeless newsboy who is lead to a subway car by a mysterious stranger (sounds fishy, I know). Through the subway he meets a grand wizard named Shazam who gives him the power of the Greek gods. All Billy has to do to summon the power and turn into Captain Marvel is say the word “Shazam!”. This word summons a bolt of lightning from the sky that grants him his powers.

Captain Marvel was so popular in the 1940’s that it outsold DC Comics‘ Superman. This popularity allowed the character to become the first super hero to hit the big screen in Republic Pictures serial ‘Adventures of Captain Marvel‘. This popularity lead to various lawsuits that were actually won by Captain Marvel publisher Fawcett Comics. Unfortunately, they lost too much money fighting DC Comics and in the end were bought out. DC Comics didn’t trademark the name, but an up and coming publisher called Marvel Comics did (who created their own hero around the name), so when DC Comics revived Captain Marvel in the 70’s they had to change his name to ‘Shazam’.

So it’s not far fetch to see that Comix Zone was inspired by the story of Billy Batson, a kid capable of transforming into something greater than himself, early in its development. In Comix Zone it was originally meant to be a down and out geeky comic book artist turned super hero while trapped in the Comix Zone. Also notable is that Shazam also gets struck by lighting when transforming into his alter ego, which is also featured in Comix Zone as a bolt of lighting hits the comic book that Sketch is working on and causes him to be banned into the Comix Zone.

The mutants in the sewers.. 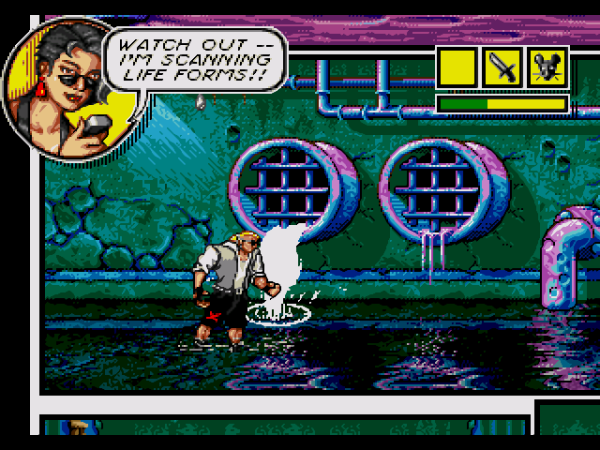 I’ve always been a huge fan of the Teenage Mutant Ninja Turtles, as most kids my age were growing up. I would always try to find connections to other media and one that always stuck out to me was Comix Zone. Let’s start to break this down…

Everyone knows the origin story of the Turtles. The most popular one from the orignal Mirage comics run started with a young boy carrying home four baby turtles from a pet shop. A young man next to him notices that a blind old man is crossing the street and doesn’t notice a truck rushing towards him. The young man springs into action, bumping the boy and causing him to drop his pets down the sewer drain. As the truck swerves it spills a container of green ooze down into the same sewer drain as the Turtles.

The ooze is known as Mutagen, a waste byproduct created by a race of stranded aliens known as the Utroms, as they attempt to build a new spaceship. Most kids know the most popular Utrom as Krang (in some versions)! So yes, the ooze does have a tie-in with aliens, so don’t go crucifying Michael Bay (just yet).
Now if you look at the villains in Comix Zone, they are said to be mutants from outer space, trying to invade Earth. If that isn’t enough, parts of the first stage actually take place in the sewers and they both feature heroes living in New York (though this is a cliche in comics in general) and the game even features a strange green ooze. Comix Zone is a embodiment of everything 90’s and nothing was bigger in the early 90’s than the Mutant Ninja Turtles, thanks the success of the is films and cartoon.

Any comics we missed? Anything you disagree with? Voice your opinions in the comment section.

2 responses to “Comics to Cartridge: Comics that inspired Comix Zone”