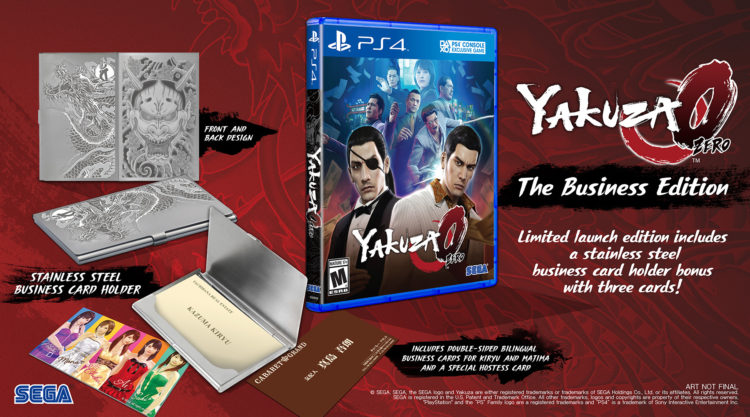 SEGA has just announced yet another cool launch edition that will be releasing soon! Due out Jaunary 24th, 2017, Yakuza 0 “The Business Edition” will contain a physical copy of the game, a stainless steel business card holder, double-sided bilingual business cards for Kiryu and Majima and a hostess card. Yakuza 0 will be releasing both digitally and physically in the Americas and Europe. As of this posting, we are unsure if “The Business Edition” will be exclusive to the Americas, or if Europe will be receiving it as well. As soon as we have an answer we will update this story accordingly.

You can pre-order Yakuza 0 today on Amazon, saving 20% if you are a Prime member. The listing has yet to update to “The Business Edition”, but SEGA promises that all pre-orders secures fans a copy of the special edition.

After the break, check out the new trailer and additional press release details on “The Business Edition”!

A Stainless Steel Business Card Holder – This edition of the gamewill come with an ultra sleek business card holder tailor made for gangster executives. Show everyone in the boardroom you mean… business when it’s time to whip out the cards, because Kiryu’s ‘Ryu’ (dragon) and Majima’s ‘Hanya’ (demon) tattoo design adorn each side of the card holder.
Three Business Cards – In addition to the card holder, the Business Edition also comes with three professional business cards from Tachibana Real Estate’s Kazuma Kiryu, Cabaret Grand’s Goro Majima, and the cabaret club Sunshine’s hostesses. A major key to business is networking, so it would probably be a good idea to keep these cards somewhere close at hand. Besides, who wouldn’t want a colorful card graced with the lovely ladies from Sunshine?