Go beyond the limits of reality into the realm of imagination with Mario & Sonic in Dream Events – intense, fast-paced experiences with your favorite characters that add an all-new layer of party fun you won’t find anywhere else. In this trailer contains three Dream Events to choose from to play with (or against) family and friends such as Dream Shooting, Dream Karate, and Dream Racing.

Mario & Sonic at the Olympic Games Tokyo 2020 is set for release on November 5 in the Americas and November 8 in Europe, exclusively on the Nintendo Switch. Hit the jump for screenshots and details on the mini-games after the break. 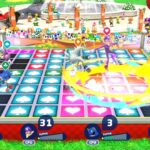 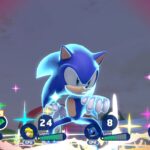 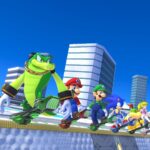 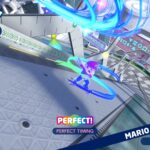 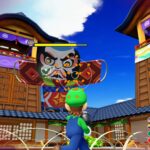 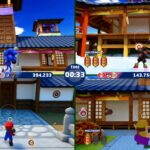 Dream Shooting: Aim and take fire at a range of targets placed all around a traditional Japanese manor in this competitive score-based event! At different intervals during the match, flying kites will appear, which players can target for bonus points.

Dream Karate: Fight to light up the most blank spaces featured on the floor to expand your territory, combining the lightning-fast action of Karate with free-for-all gameplay! Every space where an enemy falls by your hand will light up. The player or team that lights up the most spaces at the end of the round is the victor. It’s chaos, fun-filled chaos!

Dream Racing: Hop on a hoverboard and zoom through a downhill course filled with question-mark power-ups and challenging obstacles, performing sweet tricks to earn a speed boost and gain the lead. The first one to the bottom wins!