On this SEGA News Bits, we share our thoughts on the newly released mini games as a part of SEGA’s 60th anniversary. How do the games play, which is our favorite and what is all this drama around the Golden Axe game?

SEGA West announced their plans for the company’s 60th anniversary, and the biggest news was the release of four mini games: Armor of Heroes, Streets of Kamurocho, Golden Axed and Endless Zone! Listen to our thoughts on these new (and old) titles as well as how this all ties in with an unreleased 2013 game.

END_OF_DOCUMENT_TOKEN_TO_BE_REPLACED

SEGA has announced that their big revolutionary news in this week’s Famitsu issue is going to be the Game Gear Micro. While it was as huge as a lot of people where speculating online, its still technically new SEGA hardware and its a type of device that no other company h as tried before. This new Game Gear Micro also really lives up to its name. Check out our video for all the latest information we know and come back later for more information as it releases.

SEGA has been rolling out a new ad campaign in Japan for the company’s 60th anniversary, cleverly depicted as “GO SEGA” since “60” and “GO” look so similar in the SEGA logo font. The star of the campaign is Maito, the real life son of Hiroshi Fujioka, the actor who played Segata Sanshiro during the Saturn era. Maito plays Segashiro, whose catchphrase “It’s a SEGA” sounds a lot like “Segashiro”.

Previous ads just had Segashiro walking around spouting his catchphrase, but this latest ad really goes all out on fan service and Segata Sanshiro lore.

END_OF_DOCUMENT_TOKEN_TO_BE_REPLACED 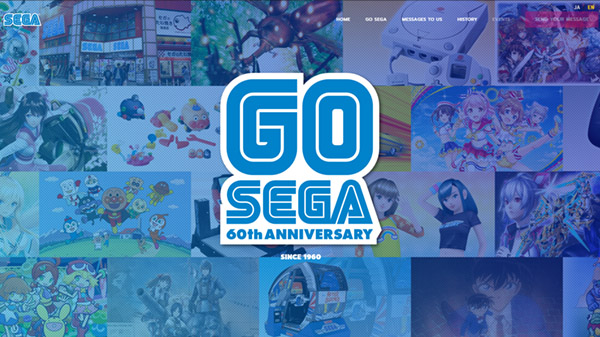 SEGA has launched it’s new website, “GO SEGA” to celebrate the company’s 60th anniversary with a brand new logo and showcasing the history of SEGA’s greatest achievements in gaming. SEGA will celebrate it’s 60th Anniversary on June 3, 2020 with updates on Ayumi’s 60 Year History and various content such as interviews, events and more. SEGA Holdings Co., Ltd. Chairman (Representative Director), Haruki Satomi, left a message on the website to fans saying:

“This year, sixty years will have passed since Nihon Goraku Bussan Co. Ltd., the predecessor of SEGA, was established on June 3, 1960. We are indebted to everyone who has patronized the SEGA Group for many years, and would like to express our deep gratitude to all of you. We want to astonish the world with breath-taking experiences that no one in the world has ever imagined. We want to be a company that continues to provide inspirational experiences to everyone in the new world of the future.

SEGA has also released a new campaign video featuring the eldest son of Hiroshi Fujioka (known for his iconic role as Segata Sanshiro), Masaki Fujioka, as SEGA’s 60th Anniversary Ambassador “Sega Shiro” who wants people to know more about SEGA. Here is the updated Sega Shiro website to check out What are your expectations for SEGA’s 60th Anniversary? Let us know by leaving a comment below.