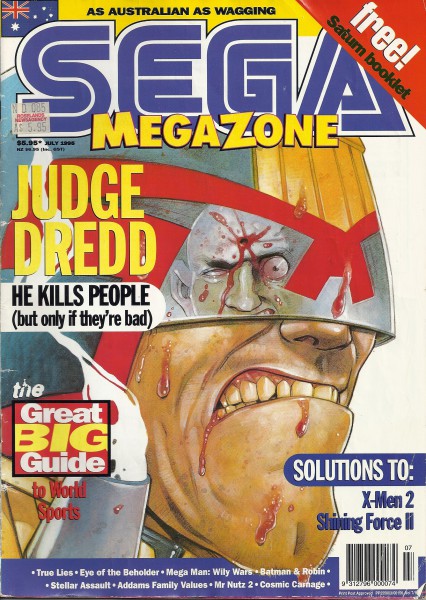 Ahh the Halcyon years of gaming before the internet. When gamers roamed the earth, waiting eagerly each month for a new issue of their favourite magazine to get the latest news and reviews for upcoming games. Let’s take a look back at a classic SEGA periodical with the July 1995 issue of SEGA Megazone Magazine. If you think this is nifty, wait until you hit the jump and see the rest of what the magazine had in stock. There will be boobs…

SEGA Megazone was Australia’s only SEGA based gaming mag through the Mega Drive years, with a penchant for original hand drawn covers. Usually they contained a lot of blood or violence too, making even the dullest games seem more action packed. It’s a far cry from the CGI renders or publicity art that is commonly seen in today’s mags.  The magazine was known for it’s brilliantly unique artstyle, fantastic and irreverent sense of humour (which once landed the mag in hot water when they threatened to kill a koala if subscription quotas were not reached), and overall just feeling very much like you would expect SEGA to be during the mid-ninties. 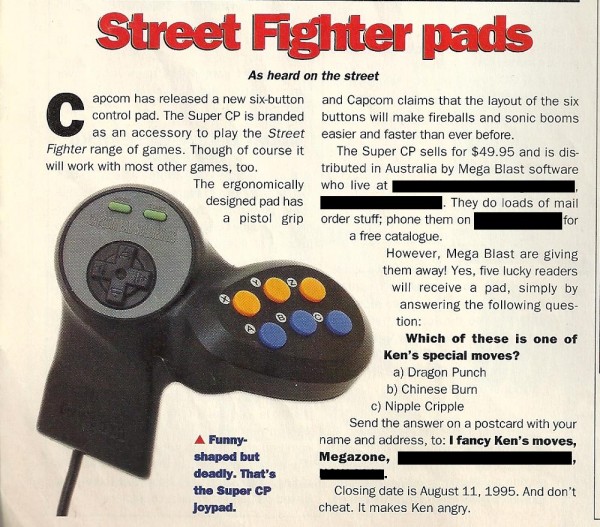 Good lord, what the hell is that? Apparantly this is what the latest ‘Fighting Game controllers’ looked like back in ’95. I wonder how many people actually played with one of these and found it preferrable to the standard 6 Button Mega Drive pads. I feel my wrist getting sore just looking at this thing.

While I do miss the days of magazines to an extent, they had some clear and persistent problems. One of the most important was the issue of limited space, so what happens when you have dozens of games to preview,  but only half a page of magazine left? Well it’s time for the one sentance joke preview section! Truly, a lost art in video game journalism…

Now that’s time saving. All you need to know about Skeleton Krew in four words. Genius.

Oh yes, I promised you boobs didn’t I? Well Megazone wasn’t the type of magazine to be concerned with censorship, and so the ‘Reader Art Corner’ was often home to many risque depictions of gaming characters with their tits out. They were printed uncensored too sometimes, meaning I had to ‘Sonic Block’ this one for the benefit of our younger readers myself. Names have been with-held to protect the innocent. 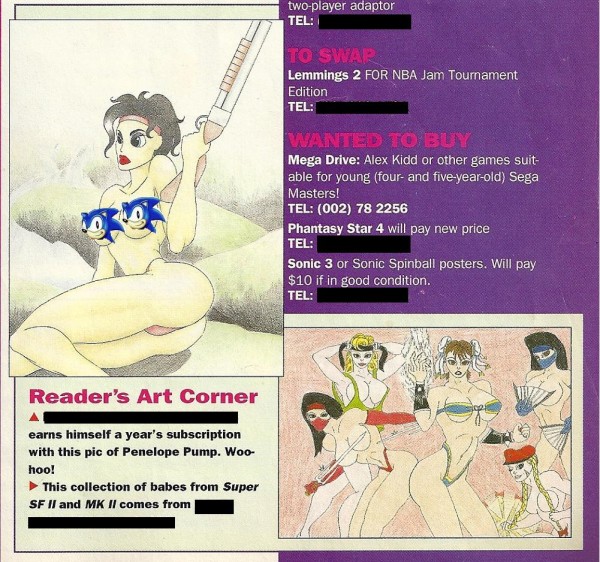 Don’t recognise Penelope Pump? Well she is actually an original character who appeared in a monthly comic that was published in Megazone each issue. It was basically a great big tribute and sendup of all things video game, delivered with a flavour only possible in teh mid ninties. At one stage it involved Penelope Pump and Harri Desperados fighting an army of Pac-Men in a world inspired by DOOM. Also Squids. It really defies explanation, please check out what I have been able to preserve for the benefit of future generations in this forum topic!

I hope you enjoyed this journey to yesteryear, join us again for a look at more great covers, bizarre news pieces and maybe even some classic Sega Advertisements from back in the golden ages!