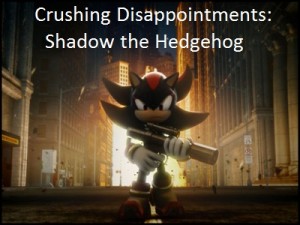 Many people forget that Shadow was actually a pretty popular and well liked character back in his early days. Even after Sonic Heroes, Shadow had still amassed enough rep from his debut in Sonic Adventure 2 to remain high in the hearts of fans. When Shadow the Hedgehog was first revealed, there was a lot of excitement within the Sonic fan community for the game, because it was the polar opposite of the previous game, Sonic Heroes, in many respects. It focused on story, it was dark, and it was focusing completely on a fan favorite character, giving him a starring role for the first time. There were most definitely skeptics, probably more then I’m actually recalling right now, but the game certainly had many within the Sonic community excited.

Of course, then the game came out…and with it, the horrible truth: Shadow the Hedgehog was a bad game. No, not just a bad game, a VERY bad game. This was not a game that would divide the fanbase, it was a game that would instead unite in their hatred of it. Why? Where did it all go wrong?

In this day and age, the flaws would be immediately apparent from a single screenshot: it’s a dark game featuring a Sonic character with guns, almost completely divorcing it from all that a Sonic game was known for. Indeed, that was the problem: it was a Sonic game trying to be a Sonic game while also not being one, if that makes any sense. Much like most Sonic games, Shadow the Hedgehog is a speedy platformer, complete with loops, homing attack chains, springs, and everything else that the Adventure series was known for. The problem is this game also threw in gun play, which became mandatory in later areas of the game as you began to encounter tough enemies that could only be properly brought down with the use of weapons.

Essentially, the gunplay took what could have been a perfectly decent Sonic game and murdered any sense of pacing. This game constantly came to a grinding halt as you were forced to deal with enemy room after enemy room, gigantic enemies with ridiculous life bars, sprawling maze like levels that where difficult to navigate and required you to constantly move at a slow, plodding pace. What’s worse is the game wasn’t made to be fun at this pace. Navigating around levels and shooting enemy after enemy with a bunch of generic auto aiming weapons simply wasn’t fun. All of the AI attacked you, no matter which mission you where playing, forcing you to kill everything in site regardless of whether you where trying to help one side or the other. The slippery controls for Shadow himself and the absolutely horrid vehicles didn’t help matters. Neither did the dark, drab, ugly looking graphics. The story, one of the key features of the game, was easily one of the worst in Sonic’s history, only possibly outdone by Sonic 06’s equally confusing and borderline non canon storyline. It was filled with needless cursing, needlessly dark endings, and a storyline that was told in a ridiculously convoluted fashion to the point we’re you’re not even sure what’s the actual storyline and what was just nonsense brought on by choosing one mission over the other.

Perhaps this game’s biggest crime, is what it did to fans like me. I was one of those fans who became ecstatic when the game was announced. I was looking forward to this game all the way up until the day it launched, and even bought it on launch day. At first, I was able to even disillusion myself into thinking the game wasn’t bad. As I played more and more though, I began to realize….that this was going to be the first main series Sonic title that I would utterly hate. Looking at the review average this game got compared to past main series titles, it would seem most reviewers would agree.

Shadow the Hedgehog was the first main Sonic title to have an average score in the fives. It would not be the last either. Many Sonic fans couldn’t believe the sort of reception the game was recieving in the gaming press, to the point that some even sent death threats to detractors of the game, such as GoNintendo head honcho RawMeatCowboy. Shadow the Hedgehog would go on to represent a horrible turn of events for the Sonic franchise, which would have long reaching repercussions on the franchise’s credibility.

I didn’t lose hope in the blue hedgehog though. Not yet. Surely his next gen title, being done in the vein of the Adventure series I had such fond memories of, would be better….right?