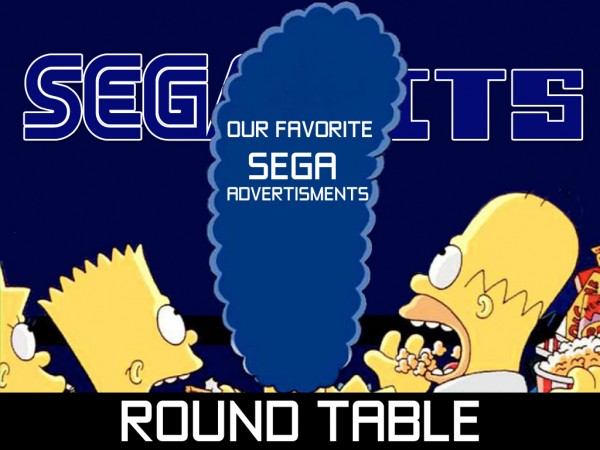 SEGA has been around the gaming business longer than most companies and when they came into the home console business they changed the game. Especially in the 90’s with their marketing campaigns that really expanded the demographic for video games.

Now we tell you what our favorite advertisements are, you can share yours as well in the comments.

In what’s probably my favorite series of TV spots, maybe of all time, the Dreamcast’s North American launch commercials were the perfect way to build up excitement for the forthcoming Dreamcast system. For each commercial, a Dremcast system was shown sitting on a rug while the camera zoomed into its glowing orange light.

Once inside, we found ourselves watching a giant party taking place in an atrium with multiple floors, each one representing a different game. For the Sonic Adventure commercial the camerea would go to a party on a certain level where Sonic was manning the DJ booth, for Crazy Taxi the floor the camera zeroed in on would mysteriously be a DMV, for Soul Calibur a drive-in movie theatre, for NFL 2k a Mexican restaurant, etc.

The commercials were awesome because they featured seamless cross-promotion with other games. All the characters partying inside the Dreamcast were SEGA characters, and even in the game-specific commercials for other games you’d see Sonic, Rayman, the Floigan Bros, the HOTD zombies, etc. making appearances.

The commercial I’m featuring in this Round Table used the party atrium to announce that the Dreamcast’s launch day had arrived.

While I’m a fan of just about any SEGA ad featuring the slogan “WELCO METOT HENEX TLEVEL” and the iconic SEGA scream, this commercial in particular does a great job of combining these two elements PLUS throws in a little Nintendo bashing for good measure. Having owned a Genesis throughout the ’90’s, and having many friends who had the SNES, I really felt like this was an apt comparison. At my house, games were fast and exhilarating. But when I went over to my friend’s house and booted up his SNES, things just felt slow and clunky. Looking back, I don’t think it was so much the blast processing as it was simply the way Nintendo designed their games. Fast games DID exist on the SNES, unfortunately my friends only owned the lame ones. But who needs friends when you have a Genesis?

“Sonic has an interesting voice doesn’t he?”

Being a SEGAbits writer from a 3rd World Country, I never had the privilege of watching SEGA commercials on TV and getting inspired to force my parents to buy me that game. Though I did see 2 Indian commercials; A MegaDrive Commercial that was very similar to the American commercials, and one for Dreamcast with a chubby kid being cocky while talking about its specs.

If I had to pick between the 2, I would pick the Genesis one, as it really feels like a SEGA commercial. Even though I already owned an MD prior to the ad, it was nice seeing SEGA on tv.

I also have a bit of a confession. I never saw the Indian Dreamcast commercial, as it was barely ever on the air, but Dreamcast was sponsoring a tv show so I saw a 5 second clip of it a few times.

Unfortunately, I can’t find a clip off the Dreamcast commercial anywhere.

Even though I never saw it, it played a minor role in motivating me to buy the system as it reassured me that Dreamcast wasn’t dead yet (it aired in 2001), unfortunately I later found out it was made by a 3rd Party that launched Dreamcast in India in Fall of 2000 (talk about getting screwed).

Moral of the Story: Be thankful you live in a country where SEGA advertises on Television.

It was tough to pick one of my favorite SEGA Game Gear adverts, it was either between this one or the one with the actor from My Name is Earl.

I picked this advert because it really does define SEGA’s advertising campaign at the time. It targeted the audience that grew up with their rival, in this case Nintendo. This one is just really insulting; if a rival console developer aired an ad like this, you know the opposing side would be up in arms. Guess what? This was the point! Nintendo owned almost all of the handheld market, and having people talk about your product is better than no one talking about it at all. Even if they are just complaining about an ad.

This one makes it seem that Nintendo gamers are all zombies, running around with an outdated handheld, asking for features like color (which was something people asked for at the time). Only hope? SEGA’s Game Gear.

End the ad by calling Nintendo fans all ‘boys’ and asserting that SEGA fans are men. Men with awesome leather jackets that say the word radical.

3 responses to “Round Table: Our favorite SEGA advertisments”