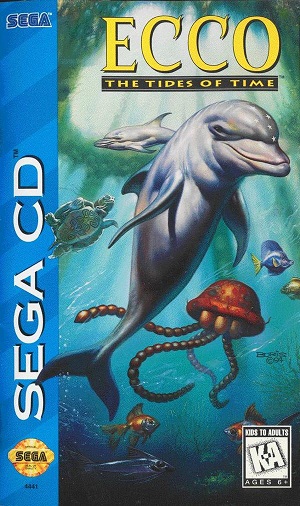 Hello and welcome to my first entry in nSEGA’s incredibly awesome “SEGA Sequel Saturdays” Segment. This is something I had actually promised to do a long time ago on behalf of Panzer Dragoon Orta. It’s something I’ll get to eventually, nSEGA, I swear! In the meantime, last week’s write up on a sequel to Ecco has inspired me to try my hand at it. After all, I beat the game years ago! So that people know where I’m coming from, I figure I’ll detail my history with the Ecco franchise. Any peeps not interested in that, feel free to skip the next two paragraphs.

Ecco is a franchise I have long had interest in, if only for its protagonist. Ecco himself is the very definition of an iconic character: uniquely designed and cute, Ecco can leave an instant and lasting impression. I was first exposed to him when my brother, who was studying to be a marine biologist at the time, bought “Tides of Time” for the Genesis. My parents would later buy Ecco Jr. for me. Both would have a large impact on my gaming childhood. Ecco Jr. was the first non-action game I ever played. I loved it for its ambient music, beautiful environments, and the beautiful ending that saw the first breath of a baby blue whale. My experience with Tides of Time was much different given I never got past the first few levels. The game proved too difficult for me and my brother, but I was so eager to see what the rest of the game had in store that I actually read through the entire strategy guide for the game. Indeed, the adventure in ToT seemed incredible, with all sorts of cool transformations and boss battles, not to mention some surprisingly potent plot elements. 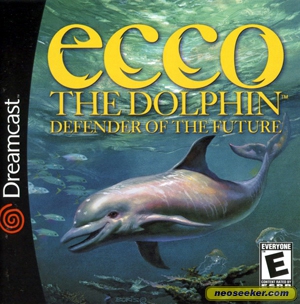 Several years later the demo of the Dreamcast sequel, Defender of Future, became one of my first experiences on the system. On the surface it shared many of the same qualities as ToT: beautiful graphics, ambient music, superb control, and hints so vague that most gamers would need a strategy guide to get anywhere. It would be years before I bought the game, and even longer before I made a serious attempt to beat it. When I finally did, I came away with a very memorable, albeit flawed, adventure.

Naturally, after beating the game, I was hopeful for a sequel that would correct the flaws. Regrettably, beyond a SEGA April Fools prank, that announcement never came. The following is my wish list of things I’d like to see in the next Ecco game. Given most of my experience is with DoF, this will be the primary game I will be addressing here.

What Should Stay the Same

Change is always great in a sequel, but there’s a difference between evolving a franchise’s formula and making it entirely unrecognizable. In the case of Ecco, I believe there are select elements that MUST remain constant if a sequel is ever produced. 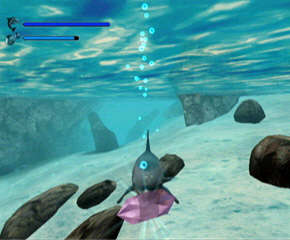 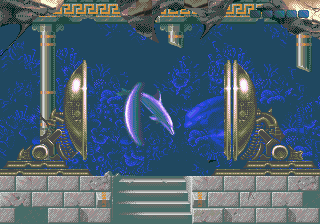 Keep time traveling a plot device. Every Ecco game has featured time travel and aliens, and these must remain. The time traveling aspect of Ecco has allowed the developers to explore some really beautiful, fantastical and diverse environments, especially in Tides of Time and Defender of the Future. In both of these games, Ecco traveled to several alternate futures. Among these futures was one featuring flying telekinetic dolphins and tides that raised out of the ocean into the sky, one where aliens had sapped the Earth of all life and covered it in terrible machines, and one where dolphins had taken over the planet and enslaved the other life forms with advanced machines. These settings allowed for some very fantastical environments that the world Ecco actually belonged to didn’t really allow for. 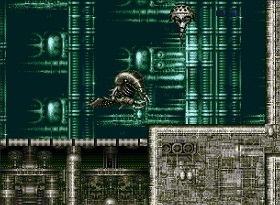 Finally, the next Ecco game must have aliens. Not the boring faceless aliens from Defender of the Future either, but the Vortex creatures from the Genesis titles. Their “Alien” inspired designs freaked me out as a kid, and seeing the Vortex queen rendered in full HD graphics on the Xbox 360 would be a site to behold. Oh, that reminds me…SEGA, don’t do any crappy redesigns either. The character designs from the Genesis games are fine. 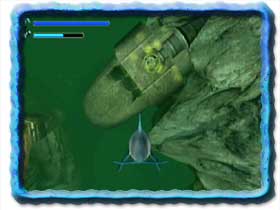 Keep the atmosphere. Ecco is a very atmospheric series. From it’s ambient music to it’s often eery locales, Ecco is one of the few games I’ve played that’s exuded a wide range of emotions from me, purely from it’s locales. From the exotic beauty of Hanging Waters and Sky Tides, to the depressing, polluted Shrine of Controversy, Ecco has had the power to inspire both awe and sadness. This wasn’t Flipper: the game, but instead a game with an atmosphere that could go from cheerful to melancholy from one level to the next. The next Ecco game must have areas like this.

What Needs to Change

All things considered, I thought Defender of the Future was a damn good 3D adaption of the Ecco formula. That being said, the game did have its flaws, and if SEGA doesn’t want critics to utterly lampoon a follow up, they will need to make some serious changes to the game. 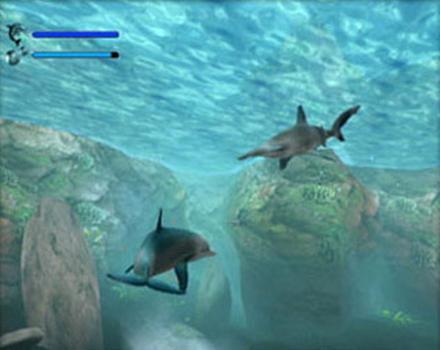 Add a lock on feature to the combat system. Look, I liked DoF and all…but it’s combat was almost broken. Considering how fluid Ecco’s movement was, hitting sharks, dolphins, and other enemies could become a fairly tiresome dogfight after a while. I’ve always considered Ecco an analog of sorts to Nintendo’s Metroid series, so I think it would be very fitting if the next Ecco game took something out of Metroid Prime’s playbook and allow Ecco to lock onto enemies. It would make battling in a 3D space far more effective, and would feel far more fluid than hitting an enemy, turning around, looking for it, and then charging again, praying to Dolphin God that you’ll land a hit. Having a lock on combat system instead of the free swimming fighting seen in DoF would make combat a heck of a lot more fun, and hopefully make it a tad more in depth by allowing Ecco to do more than just hit a shark with its nose and echo attacks. 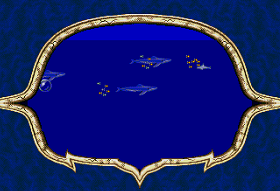 Give us a 3D map! Another thing out of Metroid Prime’s playbook, this is something the next Ecco needs to have. The ocean world Ecco inhabits is a three dimensional space, with items, enemies and locations at different depths. Given the echo location Ecco uses to make the maps works three dimensionally, I see absolutely no reason why a 3D map can’t be featured. Make it happen, SEGA!

Create a more comprehensive hint system. When a hint system makes a game more difficult, it’s broken. I don’t remember the hints from Tides of Time all that well, but the hint crystals in Defender of Future were no help. I can understand why many hardcore gamers would like these incredibly vague hints however, so they shouldn’t be done away with. Instead, the next Ecco game should have difficulty settings which control the kind of hints the game gives the player, ranging from the classic “hardcore” vagueness of DoF to more “casual” hand holding hints for players who don’t want to have to deal with that stuff.

What needs to be brought back from Genesis series.

One of my biggest disappointments with Defender of the Future was its complete disconnect with the Genesis titles. No Vortex, no Asterite, and no continuation from the cliffhanger ending of Tides of Time. DoF is a standalone game, and failed to bring Ecco’s popularity roaring back, so why stick with the storyline and setting from Defender of the Future? Here’s what they need to bring back from the Genesis tiles.

Bring back the Vortex. At the end of Tides of Time the Vortex Queen went back in time to ancient earth. Finding nothing to rule, the queen simply adapted and gave rise to the arachnids, insects, and other such creatures that we know of today. Just because the Vortex Queen was written out, doesn’t mean the Vortex as a whole should be. It’s a whole species! It wouldn’t be too out there for there to be another queen, or, if the Vortex are completely out of the question, a similar-looking alien species. The Foe were boring. It’s a bad sign for an alien race when all I remember about them is fighting a giant heart at the end of the game. That had nothing on the Vortex. Not to mention, while the Vortex live in a high tech dystopia with some decent architecture, the Foe’s future is nothing but a bland barren wasteland. Ecco needs real antagonists, SEGA, not faceless beings we never get to fight until the final boss battle!

Bring back the transformations. Now this was something really keen about Ecco. You got to transform into other creatures to solve puzzles and get through levels, including sea gulls and a school of fish! These forms came with their own dangers as well. If you’re a school of fish, you better watch out for your former dolphin friends, because they’ll devour you in a heartbeat. I sorely missed this in DoF, and while that game had its own gimmicks, such as the work harness in the human levels, it didn’t hold much of a candle to turning into completely different creatures.

Bring back the old story. Seriously, what happened to Ecco after he went into the time machine? I’ll admit, that’s not exactly a Shenmue 2 cliff hanger, but it’s still something I want to know! 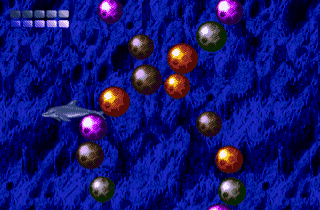 Bring back the Asterite. If we really need a great mysterious being to tell Ecco what to do, I would much prefer a great mysterious cool looking giant strand of DNA made of magic orbs over a talking crystal. Admittedly, this really is only a cosmetic difference, but it’s still something I want to see in a revival. In fact, I’ll admit most of the things I want brought back from the old games are cosmetic, but honestly…whoever did the concept art for the Genesis Ecco games really knew what they were doing.

That’s what I want in a new Ecco game. I honestly don’t think I’m asking for much, considering I’m just asking for a refined version of Defender of the Future that plays proper homage to the classic series.. Appaloosa (formerly known as Novotrade) did a pretty great job bringing their 16 bit creation into the Dreamcast era. It should have been done better though, and I hope we’ll see it done one day. Ecco is a character who is too special to be relegated to SEGA’s long list of defunct creations.  Please SEGA, bring him back. Just be sure to do it with care.

9 responses to “SEGA Sequel Saturdays: Ecco the Dolphin, Another Take”