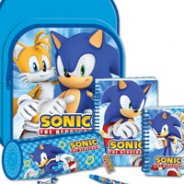 2011’s the year that Sonic turns 20, and SEGA Europe’s making sure that everyone knows it. Heading to retailers in the UK and Ireland this summer are Sonic backpacks and other back-to-school stationery items. Several shops have already placed orders for the Blueprint-designed stationery, including WH Smith, Tesco, Debenhams, Morrisons, and Next.

“I believe there is still a vast untapped potential for licensing based on games, and we will see an increase in overall sales as more retailers start listing the stock and see the results in their sell-through numbers.”

I imagine this is only the tip of the iceberg. Expect to hear much more about Sonic merchandise in the coming months, especially as his big 20th Anniversary game gets closer to release in the back quarter of this year.