In his 20 years of existence, Sonic has not only appeared in dozens of games, but he has also introduced a ton of irregularities. The irregularities I’m referring to are the things that exist within his video games that support the gameplay and the player playing the game, yet don’t make a whole lot of sense within the context of the world within the game. For example, it’s a ton of fun to run through a twirling highway in Sonic Adventure, but why in the world would such a highway even exist? Or what about all those springs and item boxes? Surely Eggman didn’t put them there, because they assist Sonic. So just how and why do elements like that exist in Sonic’s world? In this week’s weekly five, I’m going to attempt to explain five oddities of Sonic’s world. Most of my explanations will probably be complete bullshit, but that’s the fun of over-thinking!

While it’s a given that badniks and hazards like spikes and fireballs exist because Eggman placed them there to hinder Sonic’s journey, what about the springs, dash pads and item boxes? Surely Eggman wouldn’t place items that help Sonic progress through a zone. In fact, there are a number of occasions within stages when a spring is the ONLY way to progress through a level. Take away the spring, and Sonic is stuck. Game over and Eggman wins! Unless of course, Eggman WANTS Sonic to progress as a bit of fair play. If that’s the case, then Eggman is more messed up than we’ve thought! 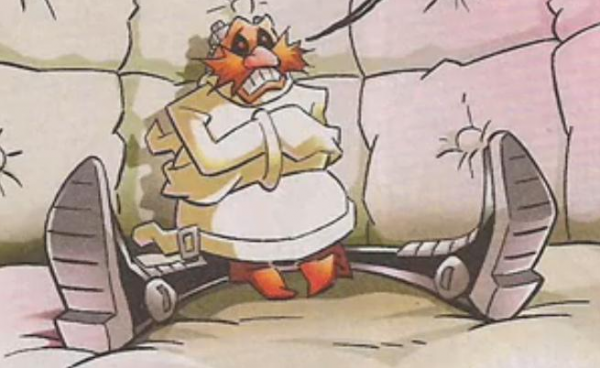 Think about it: things like springs and item boxes are mechanical and appear in even the most natural of settings. No way are there naturally occurring springs in places like Green Hill. Eggman has even outfitted certain badniks with springs. For example, the turtle badniks in Sonic Triple Trouble‘s Great Turquoise Zone. Plus, there are some springs that shoot Sonic into spikes and bottomless pits. Perhaps this is Eggman’s true plan, and a sign of his genius: gain Sonic’s trust with a number of beneficial springs and helpful item boxes, only to very rarely mix things up by introducing springs that send Sonic to his death and item boxes that contain a pack of badniks. Oh Eggman, you magnificent bastard. 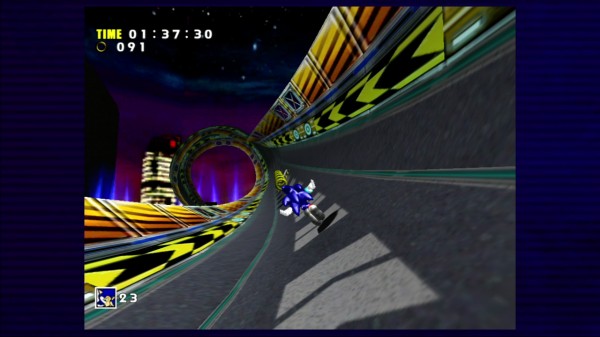 Springs and item boxes might have been easy, but this one is going to require some thinking. Just why does Sonic’s world contains so much architecture that really serves no other purpose than to allow Sonic to run through it? For example, no functioning highway would feature a road such as the one seen above in Speed Highway. While Eggman is responsible for building certain areas, such as the Death Egg and Scrap Brain Zone, there is no way that he built every stage featured in Sonic’s world. The only explanation that I can think of is that, in Sonic’s world, there exists an architect or a legion of architects who have developed a specific style of architecture that incorporates unnecessary loop-de-loops and platforms for pure aesthetics. It just so happens that this architecture suits Sonic’s free form methods of traversing environments. 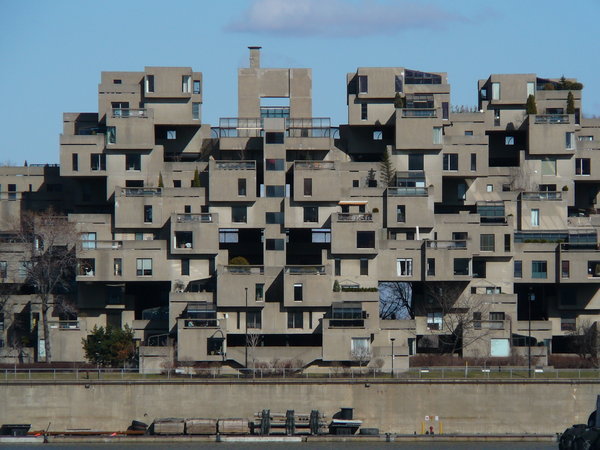 This theory isn’t so far off from the truth when you consider the image above of a real housing complex in Canada, named Habitat 67. Toss in a few loops and give the architect unlimited funding and free rein on the world, and you’ve got a planet suitable for Sonic.

The ring is the most defining item of the Sonic series, and is something that litters the face of the planet in the games. Where do these things come from, what exactly are they and where do they go when Sonic picks one up? These are the pointless questions that Sonic fans have tried to answer for years, so I’m afraid I can’t explain them too well myself. Rings don’t seem to appear at random, as they appear in patterns and formations often moving right along paths that Sonic traverses. As such, I’d have to assume that some sort of intelligence is behind the placement of the rings. Sonic’s world is no stranger to god-like characters, as we’ve already seen Light Gaia, Dark Gaia and Chaos. So perhaps there is some sort of unseen ring god responsible for creating and placing the rings. (I’ll abstain from making a “Lord of the Rings” reference.) 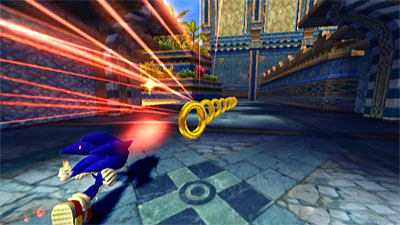 This unnamed ring god seems to have leanings towards good, as rings almost exclusively benefit hero characters. Even characters who have evil leanings have ultimately done good when given the opportunity to use rings. Note that in every game but Sonic Adventure 2, Eggman has been unable to utilize the powers of the rings. If Eggman was able to use the rings consistently, you can be sure that he would always carry some in the event that Sonic would try to destroy him. Maybe Sonic Adventure 2 is the exception, because in the end, Eggman did good by assisting Sonic and his friends in destroying the Eclipse Cannon. With the ability to see into the future, the ring god was able to see that Eggman would do good in the end and thus temporarily gave him the ability to use rings so as to protect him and ensure that he succeeded. Or maybe it’s just a convention of the genre. 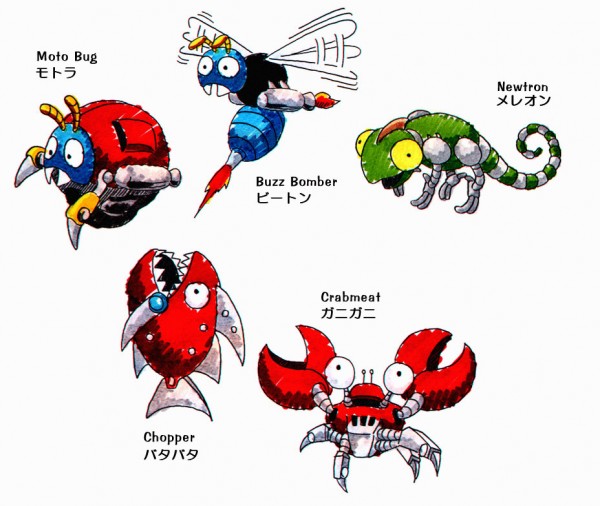 I’ve always wondered just what is happening to those little animals as they sit in the belly of the badniks? In the Saturday morning cartoon continuity, the robots are clearly fully-transformed animals who literally had their skin turned to metal. However, in the games, what is inside the badnik in no way dictates the type of animal the badnik resembles. It seems Eggman places any sort of animal into a badnik, not caring that the concept of a squirrel inside a ladybug is utterly insane. The animals are quite small. Never will Eggman place somebody the size of Sonic or Tails into a badnik. Only baby sized animals. In fact, I’ll bet they are babies. Eggman is one twisted mo-fo. 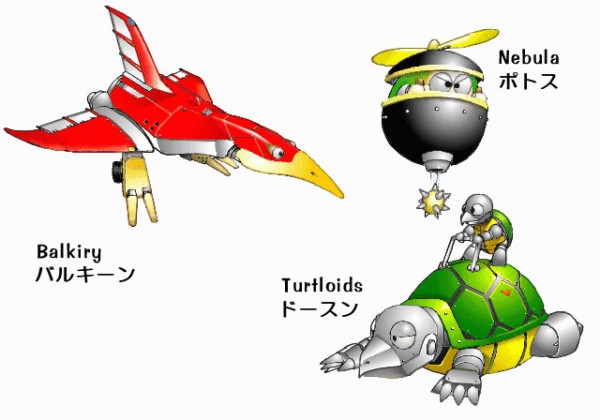 So Eggman is converting an animal’s natural energy into electrical energy, and the badnik itself has its own artificial intelligence. The baby animal is probably sitting motionless with little sensors attached to it, but since they energetically jump free when Sonic destroys the badnik, we can assume that they are completely awake whilst inside, but are restrained in some manner. With all that in mind, the next time you’re playing a Sonic game and are about to bop a badnik, think of the poor little baby who is tied down and is having the life drained from him. Methinks SEGA needs to reassess the ratings on their Sonic games.

The Time Travel Plot in Sonic ’06 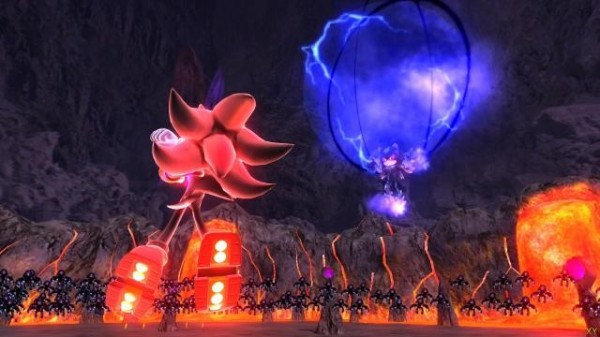 I’ve saved the best for last – Oh hey, look at the time! Gonna have to cut this one short. Let’s just say a wizard did it and call it a day.

In the comments section, share your harebrained theories for explaining the oddities of the Sonic universe. If you don’t want to touch Sonic ’06, I’ll completely understand.