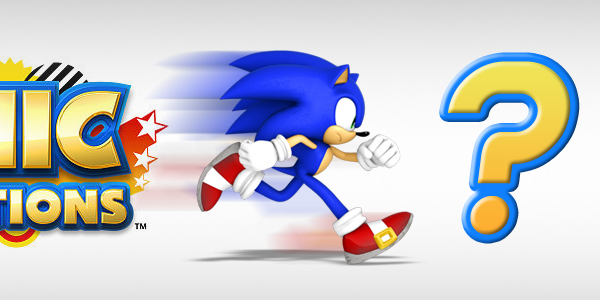 While Sonic Generations is just over a week old, fans from all corners of the interwebs have started to discuss what’s next for the hedgehog. I would say it’s a bit too soon to start speculation on the next game, but even series producer Iizuka has started hinting towards the future. So with Generations considered completed and released, let’s look towards 2012 and beyond, and just what we might expect from the next Sonic game!

This Generation or Next?

With the next generation of consoles rumored for 2013-2015, and the Wii U set for 2012, one of the big questions concerning Sonic’s next main series title is “Will it arrive this gen or next?”. Given the release timeline of past titles (two years between ’06 and Unleashed, two years between Unleashed and Colors, one year between Colors and Generations), I could easily see one more HD Sonic title arriving this generation. Possibly in 2013. Sonic Team have simply learned too much on this gen’s hardware to move development to the 2013-2015 consoles just yet. Sonic ’06 was a prime example of moving too quickly to push out a Sonic game on new hardware.

If Sonic Colors and the storybook series are any indication, we’ll see a Wii U Sonic title, but I hesitate to say that it will exclusive. A storybook title that takes great advantage of the Wii U tablet controller would definitely be an exclusive, but another main series title like Sonic Colors (yes, it was a main series title, Iizuka said so and so does Sonic Generations. Deal with it.) would be a poor decision in my opinion. Wii U may be more powerful than the PS3 and 360, but it is also touting a number of cross-platform titles including Arkham City and Colonial Marines. Why not release a cross-platform Sonic title in 2013 that includes a little Wii U exclusive by way of the tablet? That way Sonic gets a wide release on all consoles and Nintendo gets an excuse to tout their controller display. Win-win. 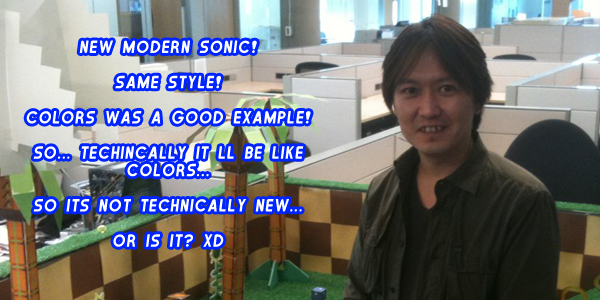 I’ll go on record as saying that I like Iizuka. I think he has done far more good in the industry than bad, and I think with the past few years of Sonic titles as an example, a lot of the bad decisions weren’t entirely his fault. And if they were, he clearly has been learning from his mistakes. Still, whenever the dude speaks, I never quite get what he’s talking about. Perhaps something is lost in translation. For example, his latest comment about the future of the series is hard to understand:

He begins by saying he wants to introduce a new standard Sonic, but also says that past titles have defined what this sort of standard will be. So apparently, the formula will go unchanged, but there will be new innovations that will support the standard style. He cites the color powers in Colors as an example of this. If my interpretation is correct, this really isn’t as big a deal as some fans have thought it was. Of course the next title would feature some sort of innovation by way of adding elements that compliment the standard style. Colors had the power-ups, Generations had classic Sonic. Even series outside of Sonic do this, such as Super Mario Galaxy, which took the basic formula of a 3D Mario game and added a new moves and the gimmick of running on all surfaces of a tiny planet. The next Sonic title will surely do something on a similar level, but just what that new “surprise” would be is anybody’s guess.

What About Sonic Dimensions? 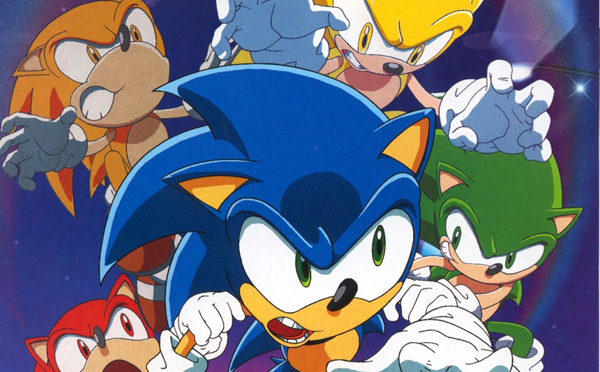 Until a more trustworthy source gives confirmation of the rumored Sonic Dimensions, I’m calling B.S. on the whole thing. For starters, the original source of the story, TSSZ, does not have the strongest reputation in the Sonic community. So to fully trust them on something like this is difficult. Secondly, the story itself simply states that “a source” told them. Nothing is given beyond that. So of course, this “source” could very well be feeding TSSZ lies as a prank, it wouldn’t be the first time. Thirdly, the concept reeks of borrowing existing ideas and spinning them into a “new game”. Any prankster can easily make a lie seem more legit when adding recognizable elements into their story. Altering the space-time continuum? A Generations idea. Multiple colored Sonics? A plot for an issue of a Sonic X comic. Each color giving each Sonic a different power? Sonic Colors color powers. Also, you’d think a leak wouldn’t provide such detailed bits of information so soon. I’ve seen legitimate leaks, and they usually gave 5% of what the Sonic Dimensions leak revealed. So again, until a source is verified and the leak is revealed to be legit, it is no more than a bit of fan fiction gone wild. 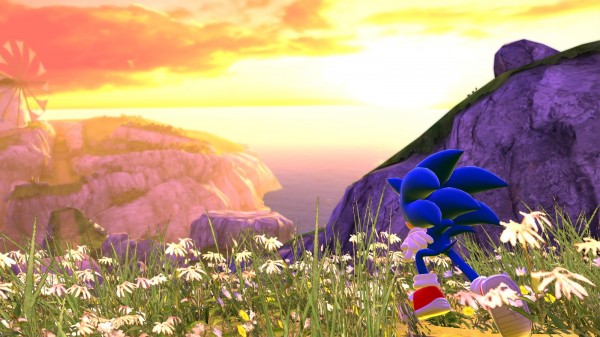 Sonic Generations may be my favorite Sonic game of the past ten years, but that doesn’t mean I don’t see areas in which the franchise could improve. Technically, Sonic Team should improve the quality of the textures. George discusses this downside in his review. Efforts should also be made to shorten load times, as the PS3 version of the game suffered from long loads. Musically, the series has always been fantastic, but a recent college project highlighted at Sonic Retro shows how much more theatrical a Sonic game could be with interactive music. The link goes into the process more, complete with a great example, but basically the way it works is like this: the score reacts to the players actions and location within the stage. Say Sonic slows down to platform, the music switches to a short loop of calmer music. Then he jumps onto a spring and the music switches to a faster paced beat, then just as Sonic flies onto a rail the main theme kicks back in and the music goes all out. These sorts of graphical and musical improvements would go a long way in making the next Sonic game so much more rich and epic.

As for controls, I really think what we have now could just use some tweaking. Unleashed improved upon ’06, Colors improved upon Unleashed (in some areas, other areas… not so much) and Generations took the past four years and improved upon things even more. However, I would like to see slow speed controls tweaked, and jumping perfected. The homing attack could use some tinkering. Once the modern style of gameplay is at a great place, which in my opinion it nearly is, Sonic Team could then expand on these innovations and surprises they’re talking about. As long as these additions do not overshadow the standard gameplay.

2012 might not see the next big Sonic title, but we will be seeing other games starring the hedgehog. Sonic 4 Episode 2 has been said to be on track for a 2012 release. Given how much more improved classic Sonic is in Generations compared to Sonic 4 Episode 1, SEGA would be foolish to not simply implement the controls and physics of the latest 2D gameplay into the upcoming classic sequel. What about the homing attack? Well it clearly works with the Generations style, as it is a classic equippable skill as seen in the video above.

SEGA has been very quiet about another All-Stars game, but Iizuka has recently stated that “We will probably see Sonic going into other genres of games”, so it’s certain that the series is not dead. Perhaps we’ll see another racer, or a fighter or even an RPG? The storybook series is sure to make a return via the Wii U. We’ve seen Arabian Nights and King Arthur, so why not venture into western fairy tales? I’d love to see Sonic and the Beanstalk complete with a giant Eggman living in the clouds. Mario & Sonic at the 2014 Winter Olympic Games is probably set for the Wii U in late 2013.

And then there is the big next game that I’ve been talking about over these five talking points. I really can’t imagine what we’ll see next, though my ideal game would bring back series staples including Angel Island and the emerald lore. Perhaps SEGA could innovate the over world map by allowing players to freely fly the Tornado from stage to stage? Or introduce new powers by way of a parter team up similar to Sonic Advance 3? Or how about bringing back Tails and Knuckles as secondary playable characters? For the first time since 1999 it’s actually exciting to speculate about the next Sonic game, I just hope what we see next will top Generations.

20 responses to “The Weekly Five: Sonic’s Next Adventure”