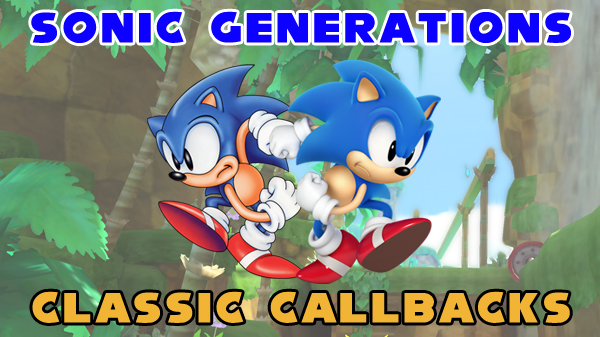 While Sonic Generations release is still a month away, thanks to the many screens and video clips released by SEGA, fans have been able to pick apart every pixel. Some screens feature road signs with in-jokes, while others feature references to classic Sonic stages from the Genesis/Mega Drive days. Yes, even though the game only features a handful of classic era zones, that hasn’t kept Sonic team from including callbacks to zones not featured in the game. In this week’s Weekly Five we’ll run through five of these way past cool references.

Picking up on the “Hilltop”, “Rooftop” stage name similarity, Sonic Team has taken things one step further and snuck in those strung up platforms. While SEGA has yet to release footage of these in action, I’m very much hoping that the “squeak squeak” sound effect returns. Love that sound, next to the fire ball “whoomph!” of Marble Zone it may be one of my favorites.

Now this is an interesting one! Rather than working a classic gimmick into a modern stage, Sonic Team has added a Sonic 3 gimmick into a Sonic & Knuckles stage. The spinning tops were probably one of the best classic gimmicks to screw around with. Running atop the top, Sonic could control the speed and direction. It looks like the Generations version strips the gimmick of some of this fun, as the top can only be used for a certain amount of time before running out of spin. You can see the top in action by checking out the giga.de preview.

When Seaside Hill was first leaked to be the Sonic Heroes representation in Generations, I was a bit iffy on the choice. Sure I enjoyed the original stage, and liked the design, but it just seemed too similar to Green Hill. Thankfully, Sonic Team has focused more on the ruins and water and less on the checkerboard hills, especially when it comes to the classic version of the stage. Sonic will spend his time both above water and underwater when blasting through the stage, and occasionally he’ll encounter strong water currents. How does a hedgehog stop himself from slamming into a spike ball? Grab onto those conveniently placed vertical bars from Hydrocity Zone. This appears to be one of the more blatant callbacks, as the Seaside Hill stage seems to lift the same portion of the Hydrocity layout.

One of my top choices for a zone to be brought back in Generations was Flying Battery. It’s just such an awesome classic stage: the music, the speed, the layout, the unique gimmicks and enemies. Unfortunately, it didn’t make the cut. Fortunately, a Flying Battery-like airship looks to be causing classic Sonic a bit of trouble in Rooftop Run. Various screens and clips hint towards the airship acting like a G.U.N. Truck, hunting Sonic throughout the stage. Its got the red and white paint job, the copper colored pilot area and even the beloved big propellors.

The Sonic 3 multiplayer stage Endless Mine may have little in common visually with Sonic Adventure 2’s City Escape, but musically both share a smilier riff. Sonic fans have picked up on this before, as one YouTuber mixed both tunes together in a suite that predates Generations. In the classic remix of “Escape From the City”, during the portion “Danger is lurking around every turn. Trust your feelings, got to live and learn” the theme switches to the Endless Mine theme. Pretty cool reference, makes me hope more of the classic remixes feature callbacks to Genesis themes.

Once Sonic Generations hits stores, stay tuned to SEGAbits. I’m sure there will be countless classic callbacks for us to uncover. Until then, I’m up, over and GONE!