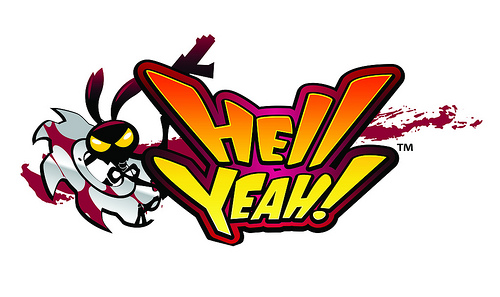 From the Sega Blogs…

You are a devil rabbit named Ash, who also happens to be the prince of Hell and feared by all. But one individual has forgotten that. Your archenemy Fat Rabbit has posted your secret sex pictures all over the Hellternet, and that makes you seriously angry. This sucks! You want him to burn in hell, and with your hot temper you can make revenge oh so sweet. It’s you and your trusty driller alone (plus some other weapons and customization!) against everyone else. Drill your way to vengeance and explore the huge and varied world of Hell Yeah! Delving into the darkest depths of the underworld, you can ride the driller as a slaughter machine and exterminate those rude and ugly monsters by blasting and tearing them apart on your mission to get Fat Rabbit. Don’t feel bad, they all deserve to die! It’s you against all Hell, after all. It’s Hell Yeah!

Oooooh man! I cannot wait to see more of this! Here’s the trailer. Hell Yeah! Wrath of the Dead Rabbit will be out sometime in 2012.

6 responses to “Does Sega have a new game coming?…Hell Yeah!”