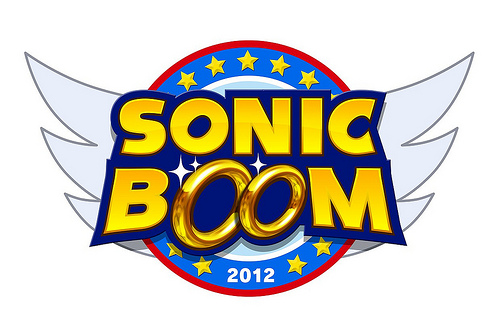 Ticket sales start early for the American Sonic event, Sonic Boom! Besides mingling with fellow Sonic fans, Crush 40 and Cash-Cash will be preforming as well! This will all be taking place at the House of Blues in San Diego July 13th during Comic Con! Don’t be surprised if you end up seeing some of your favorite Sonic alumni like Takashi Iizuka, Yuji Naka, comic writer Ian Flynn, community members Kellie Parker, Ken Balough and Arron Webber or others! You can even meet me! (Just don’t ask for my autograph. You couldn’t afford it.) Jump ahead to see Sega’s full press release.

Last month, on Hedgehog Day, we announced that Sonic Boom would be held onFriday, July 13, 2012 from 5:00 PM until 10:00 PM at the House of Blues in San Diego, CA (during San Diego Comic Con). Today, we’re pleased to announce thattickets for Sonic Boom will go on sale this coming Monday, March 19th at 10:00 AM Pacific Time exclusively through TicketMaster.

We don’t want to give away all the surprises we have in store for you at Sonic Boom, but I’ll let you in on one — Crush 40, along with special guests Jean Paul and Alex Makhlouf from Cash Cash, will be playing live! Rock out to your favorite Sonic songs along with an audience full of other fans. Of course that’s just one exciting part of Sonic Boom… but trust me, it’s going to be a night you don’t want to miss.

Why are tickets going on sale so early?

We know that many of you will be traveling to San Diego to attend this event, and will therefore need a hotel room. During Comic Con, most hotel rooms are reserved through the convention’s hotel room lottery, which is opening on March 29, 2012. We’re selling tickets early so you can know for sure you have a ticket for Sonic Boom before you book your hotel room.

We’re doing things a bit differently this year, and we wanted to take a few moments to explain why, and what you need to know about the tickets for this year’s Sonic Boom.

Last year, we distributed tickets for free. As a result of this, we saw people grabbing up large numbers of tickets simply because they could, with no intention to use them. This made our planning more difficult as we couldn’t get an accurate headcount as a result, and many fans that wanted to come felt that they could not, because they didn’t have a ticket.

This year, our tickets are being sold through TicketMaster, which is the ticket vendor for the House of Blues. Second, we are charging a small fee per ticket this year — $15 for the ticket and a $5 TicketMaster fee, for a total of $20 per ticket. However, we’re also providing you with more than we did last year — there will be free food at the event (instead of for purchase, like last year), and each ticket holder will get 2 drink tickets that you can redeem for a drink at the bar. (You must be 21 or older with proper ID to redeem your tickets for alcohol.) It is our hope that this system results in more accurate records for us, more available tickets for fans, and a great Sonic-filled evening for everyone.

Last year, we had a separate line for people who wanted to get into Sonic Boom but didn’t have tickets. We did this because of the problem we mentioned before — we didn’t have an accurate headcount, and we wanted to let in as many people as we could. This year, we will NOT have a line for people without tickets. You must have a purchased ticket through TicketMaster to enter Sonic Boom. Although the event is held during San Diego Comic Con, you do not need a Comic Con badge to get into Sonic Boom.

Finally, although the event is being held during San Diego Comic Con this year, you DO NOT need a Comic Con badge to enter Sonic Boom. As long as you’ve got your purchased TicketMaster ticket and your ID, you’re set!