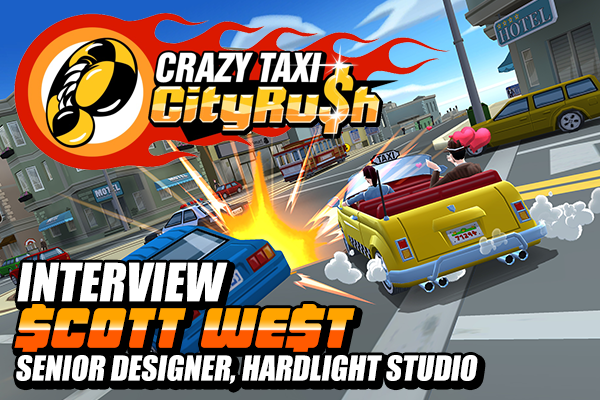 How would you describe Crazy Taxi City Rush when compared to past titles in the series?

Crazy Taxi City Rush has been designed from the ground up to be a totally new experience aimed solely at the smartphone and tablet market. With this in mind the philosophy behind the play style and the controls has been completely rethought to ensure that experience of the game is suited to the platform. At its heart, it is still a Crazy Taxi game, and there are many elements that old fans will connect with, but elements such as Controls and Mission structure have been totally redesigned to create a new version of the Classic game. 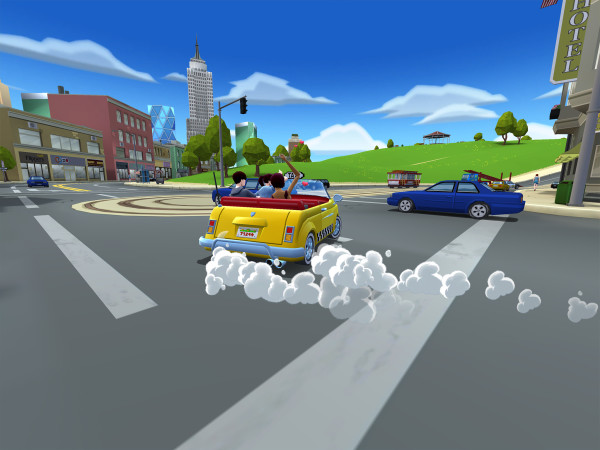 It has been said that Hardlight Studio is working in cooperation with Kenji Kanno, the man behind the original Crazy Taxi, can you describe his role in this game? Were there any scrapped ideas from past titles that he was able to work into City Rush?

Indeed we have been working closely with Kenji Kanno on the new Crazy Taxi City Rush. The initial design concept came from Kanno-san himself, which formed the basis for our prototype. Throughout the development process we have had regular contact with Kanno-san, including several studio visits from Japan to the UK to catch up with the Dev team face to face. With regards to his role, Kanno-san has worked with us directly on many aspects of the game, ranging from mission flow and game structure through to player progression and down to the music that we used in the game.

Were other SEGA properties considered before deciding on Crazy Taxi?

We were actually finishing off Sonic Dash when we were approached by the original creator of Crazy Taxi, Kenji Kanno, to discuss an idea he had had for a new version of Crazy Taxi aimed towards the mobile platform. Following on from this early discussion we created a prototype based on his new design, from which we formed the foundations of the new Crazy Taxi City Rush that we have been working on! 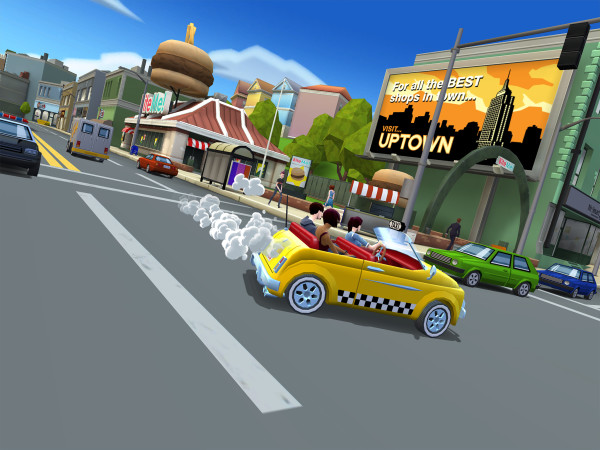 Can we expect to see drivers from past Crazy Taxi games in Crazy Taxi City Rush? Will they be playable, NPCs, or both?

Yes you can! We’re all massive fans of the original Crazy Taxi here at Hardlight and whilst we’re keen to ensure that this new version is appealing to those who have never heard of Crazy Taxi we also wanted to pay homage to the original. In City Rush, we’ve included 3 of the original characters (Gena, B.D Joe and Axel) who act as ‘Mentors’ and each managed one of the City’s in the game. Whilst these characters are NPC’s and aren’t playable, we thought it would be more fun to allow users to buy their cars! So as you progress through the game and open up new Districts, you’ll not only meet new characters, but you’ll also be able to buy their Taxis!

Can we expect the announcer, either the original voice actor or a soundalike, to return?

We made a couple of key decision regarding audio, and deciding to lose the announcer was one of them. Whilst we were all massive fans of him, we felt that it didn’t’ belong in this new version of the game as all the audio in general is geared towards creating an upbeat and vibrant feeling that not only matches the games visuals but also the pace and rhythm of the gameplay. This touches on some of Kanno-sans philosophy at the start of the project, when he wanted us to understand that we weren’t just creating another version the original game, but instead were reimagining it for a new audience. 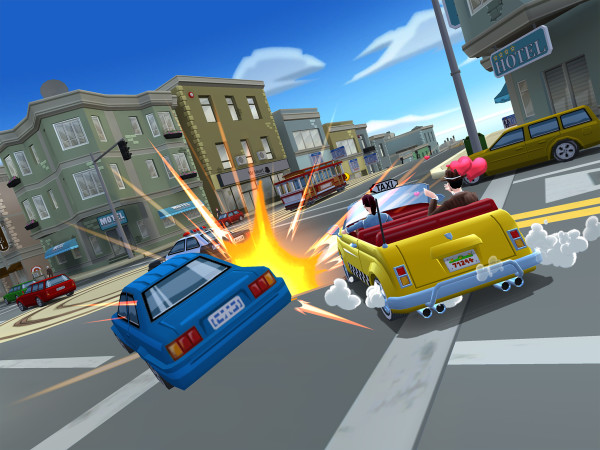 What can we expect from the soundtrack?

All the audio has been carefully selected to reflect the upbeat nature of the new game and match its bright and vibrant visuals. There’s a certain pace and rhythm that reflects the action in the game also and that’s why we’ve specifically selected tracks from 4 bands which we felt portray the feel and excitement of the game. In addition to this, another feature we’ve added is the ability for users to create their own playlists, so it’s really simple to just quickly create a playlist and then listen to that in game!

How does the free-to-play in-game economy work in this game?

Crazy Taxi City Rush has been designed specifically to be free to play, so from the very beginning of its development, we’ve designed our game around this methodology. The main loop of the game consists of the player buying their own Taxi and then completing a series of 7 HQ missions in each District. As these missions get progressively harder, the player will have to upgrade their Taxi to improve its performance and lower the difficulty rating of the HQ Missions. In order to do this, the player can take part in a variety of other missions which are available throughout the district at any one time. 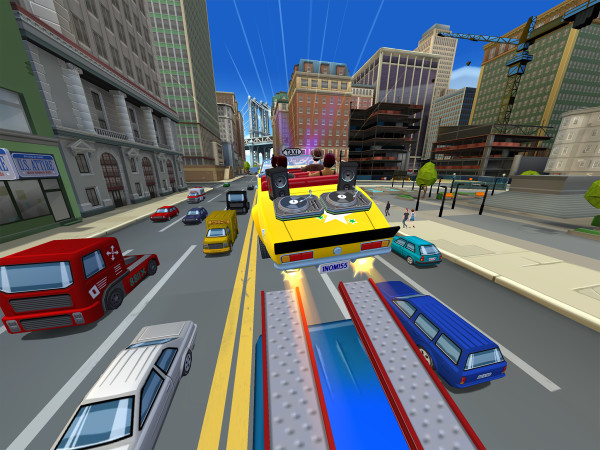 What kind of features will keep people playing?

There’s a whole heap of content in Crazy Taxi City Rush that should keep players entertained! We’ve got the main narrative led HQ missions which focus on particular crazy passengers and their reasons for requiring a Taxi, along with a host of regular ‘Pick up’ missions featuring more whacky characters.

In addition to this we have special timed missions which allow the players to drive alternative vehicle, in our case a TANK and earn a significant reward for doing so!

We also have Daily Rush missions which feature a hapless Racing Car driver who needs the player to help them out and offers an increasing daily reward! And we also have Social missions which allows players to drive their friends Taxis in along with any upgrades and customisation they may have made. It’s worth noting that Social missions also don’t cost the player any fuel either!

That’s not to mention the Customisation system, which allows players to personalize their Taxi with unique or crazy adornments which offer a Ride Bonus – a financial return for completing a mission with that item equipped. The player has the ability to customize 6 different aspects of their car, (wheels, colour, decals, trunk, hood, exhaust) The variety of items on offer allow for some truly crazy combinations! 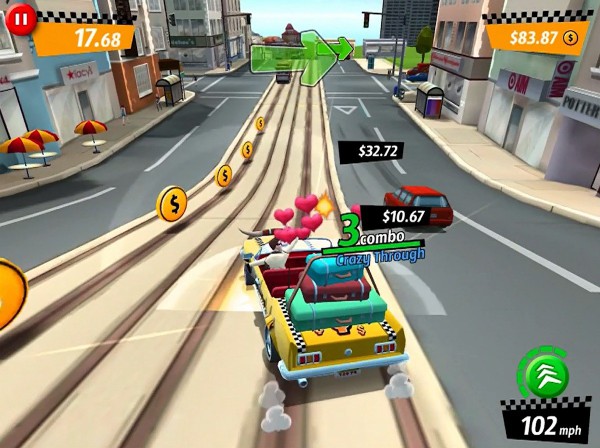 How will you handle in-game ads? Will there be real world locations like the first game? e.g. KFC, Pizza Hut, Tower Records

We have lots of exciting locations in the game world and are currently in discussion with regards to this, but as of yet nothing has been formalised.

Could we see other SEGA franchises making cameos by way of passengers or taxi cab accessories?

We’d absolutely love to do this should the opportunity arise! We’ve got a lot of ideas about some of the cool things we’d love to incorporate but we’ll have to wait and see what happens!

What is your favorite aspect of the game?

Social Missions would have to be my favourite aspect of the game. It’s the suspense of not knowing what Taxi you are going to get or how many modifications have been made to it by your friend!

It’s always a real surprise when your friend has a really outlandish set up, like a bright pink Taxi with chrome wheels and a pink Dinosaur strapped to the bonnet! As social missions offer a significant increase in fare, it’s also a good way to earn big bucks quickly!

Thank you to Scott, SEGA, and Hardlight Studio for the interview! Crazy Taxi City Rush will be releasing on iOS and Android devices later this year.