Shortly afterwards, it was time for a merchandise reveal! That’s right; the event’s organisers had secured an exclusive piece of merchandise to reveal at the event; and it was First4Figures announcing a Modern Super Sonic statue, based off of Sonic Adventure! The statue looked great from the teaser alone, but then it turned out a prototype was on hand at the event! As such, the crowd flocked to see it; and rightfully so, as in person it’s an absolutely beautiful statue, standing at 17″ tall, and complete with a sheen much like that of the golden hedgehog’s fur in the games! 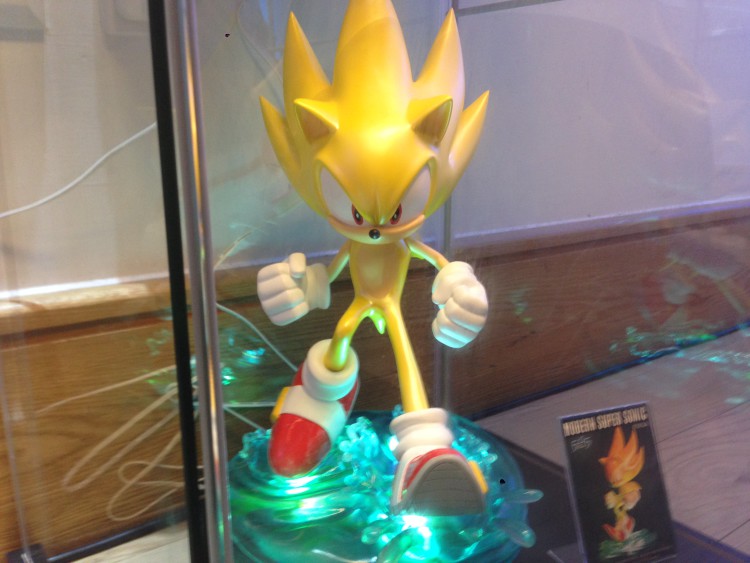 Look at that beautiful thing!

Once the hype from the merchandise reveal had settled, I took the time to check out what else the event had on offer. I entered the Sonic Adventure 2 speedrun contest, and finished City Escape with a relatively shabby performance of 02:40. I can do better, just pass me a Dreamcast pad! I also got to play some SEGA Superstars, a game I’ve not played in quite a while now; unsurprisingly, I was terrible at it, but alas! Sonic Generations was also on hand, and a small audience gathered as I tore through Green Hill Zone Act 2! I ended up getting the new record for the stage, which wasn’t too bad. 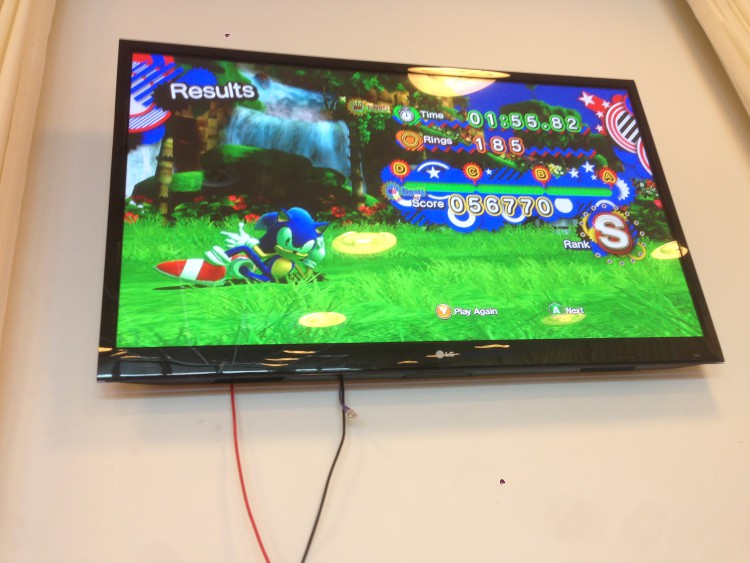 I can still do better!

I also bought an issue of Sonic the Comic during this time, adding to my slowly but surely growing collection of the series. I planned to get it signed; but then it turned out it was time for the Sonic the Comic crew Q&A, with the artists, writers, and editor of the comics! It was an incredibly entertaining talk; it was revealed that the character Grimer was actually a rough version of Sniveley from the American cartoons and comics, as writer Nigel Kitching had erroneously thought the UK comics were cleared to use those characters; whoops! The process of Amy Rose’s re-design was also revealed; Editor Deborah Tate wanted to make Amy “less of a drip,” and so removed the skirt and ribbons and the like, replacing them with a t-shirt, a kilt (and later combat pants), sneakers, and the like. Amy was pretty damn awesome in the UK comics, so this was interesting stuff to hear! 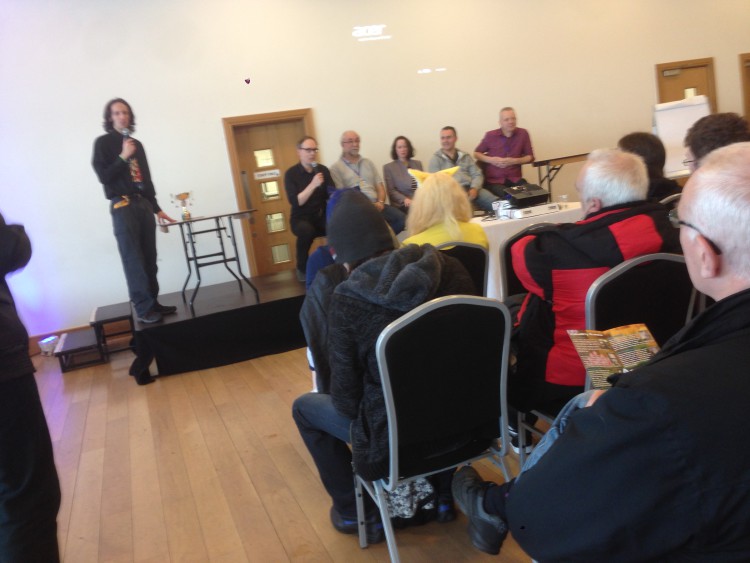 My photography has improved since the last StC Q&A I attended, clearly!

Fans also brought plenty to the convention; superb artists such as MrEchoAngel (Kimmy) were on hand, providing art prints and commissions that were absolutely stunning! I actually ended up with one of Kimmy’s wonderful prints; more stuff to find a frame for! Also on hand were Science-Fiction Collectables, from whom I bought an ace Sonic money box. Louisalulu Arts were at the event too, providing superb artwork and some great looking perler bead magnets! Independent artist Sam Webster also brought his artwork to the event, both original properties and those of the SEGA variety! In additon, available was an original Sonic the Comic page, through an auction for the Burnham Area Rescue Boat charity. The charity were instrumental in the search for Dylan Cecil, a 4-year old Sonic fan who tragically drowned in Burnham-on-Sea in 2012. When I left, the auction was up to a whopping £100; I wouldn’t be surprised if it climbed even higher afterwards. All in all, it was incredibly heartwarming to see fellow Sonic fans supporting such a great cause. There were plenty of cosplayers too, including the evil (yes, evil!) Super Sonic of the UK comics prowling the halls, as well as some superb Sonic and Tails cosplay. 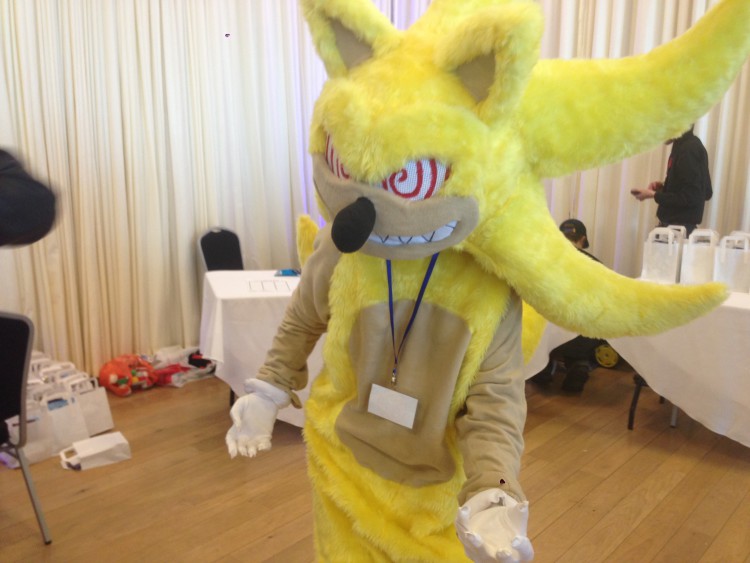 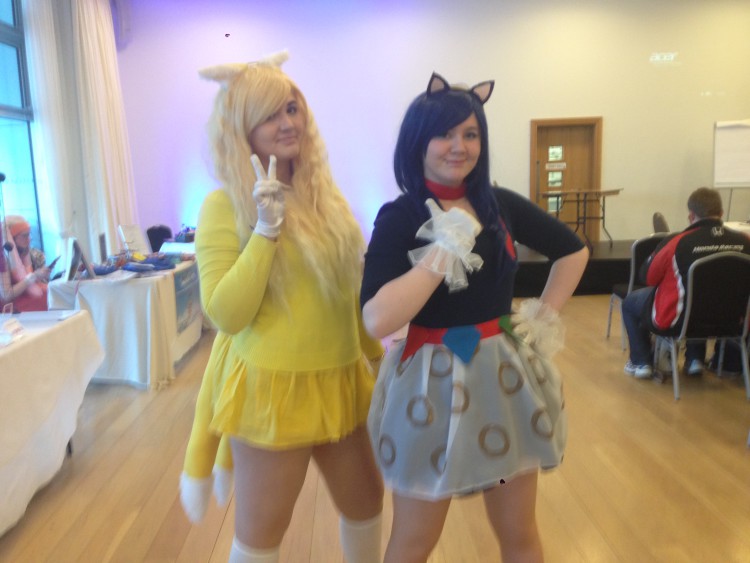 The cosplay at the event was amazing!

Sonic the Comic artist Ferran Rodriguez also held an art masterclass; but unfortunately, the 3 hour drive home meant it was time for me to go. This also meant I had to miss the live Skype Q&A with Mike Pollock, long-running voice actor for Dr Eggman; that said, the event was streamed, so folks who weren’t at the event didn’t have to miss out!

All in all, I had an absolute blast at Weston Super Sonic. Meeting all of my friends, as well as fans I’d never met before, was incredibly fun, and the friendliness and welcoming atmosphere was superb. There was also plenty to do, and of course there was a wide array of merch for people with  the money to buy. The events throughout the day were interesting, entertaining, and all-around great! Perhaps above all, the organisation of the event was brilliant; I can’t extend my gratitude to the folks that made this event possible quite enough! It was a pleasure to cover the event here on SEGAbits, as well as over on our Twitter, and I’d always be up for another one; well, I would, but I’m not sure if the family that I also dragged south would!

Bravo to those that made this superb day possible, and those who attended and contributed to its success; man, only 17 days into 2015, and I’ve got a highlight already! 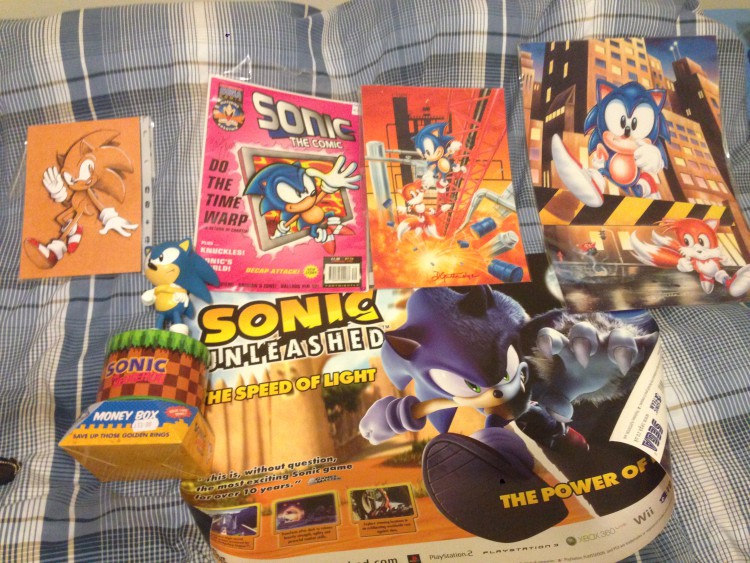 SEGAbits at Sonic the Comic-Con 2014: The Write Up

Presenting “My Life with SEGA: Nothing Else Matters ”, a short film by A.J. Rosa
Conventions Featured Impressions Weston Super Sonic

One response to “SEGAbits at Weston Super Sonic 2015: The Write Up”