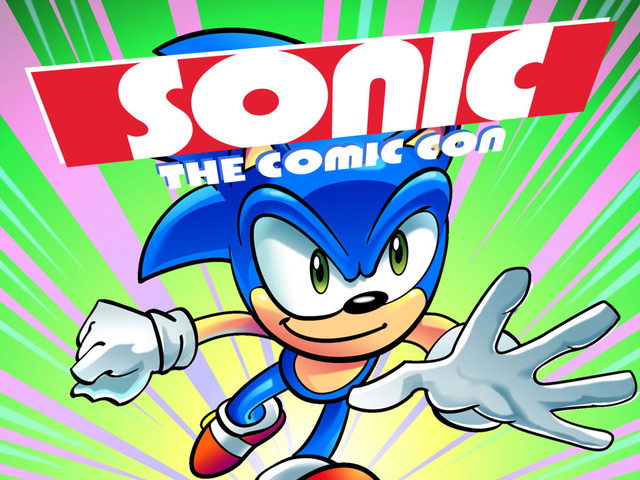 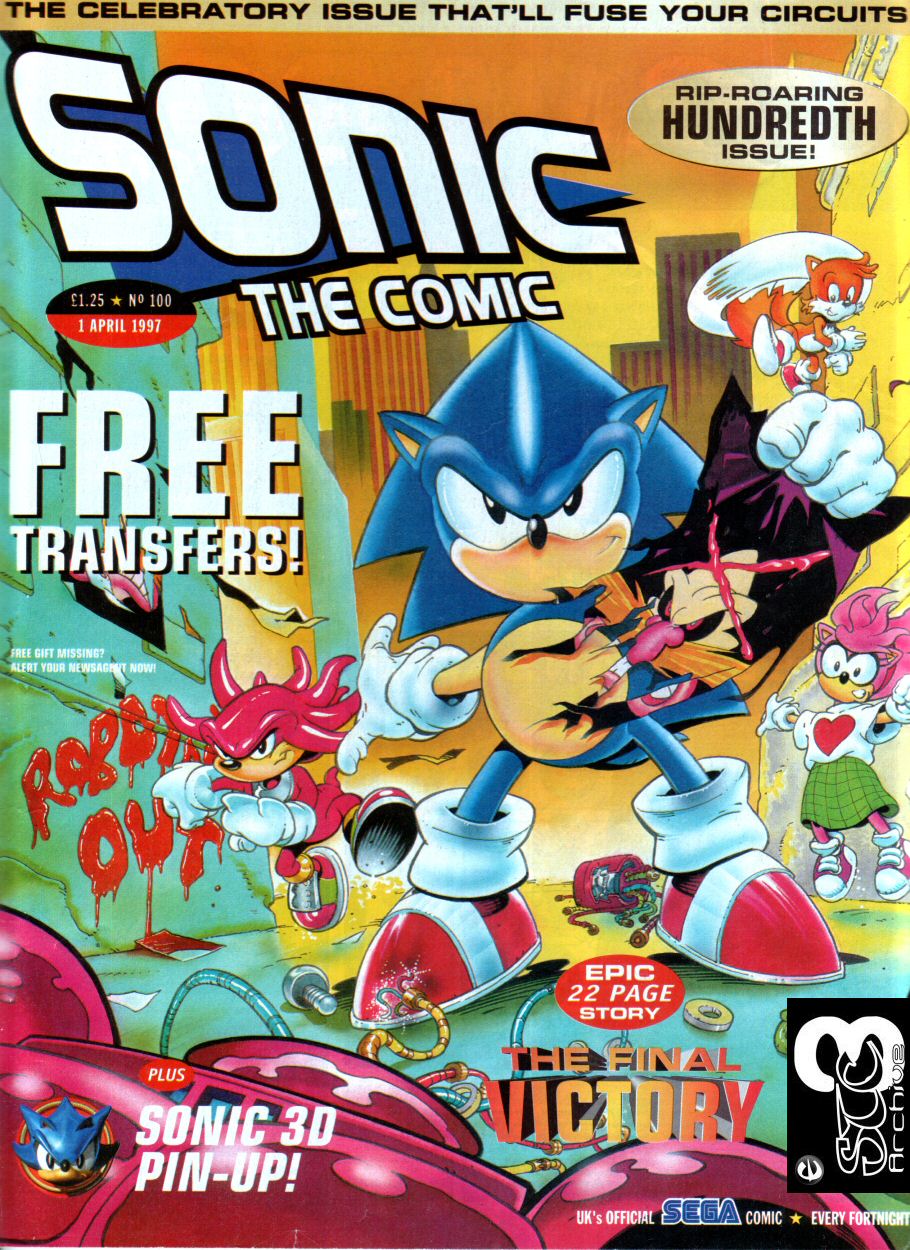 Sonic the Comic provided a very interesting take on Sonic’s universe, introducing characters and storylines not seen in the games or the cartoons. Archie was similar, but Sonic the Comic was on the whole a lot more imaginative in my opinion: there weren’t millions of Knuckles the Echidnas in this comic series, oh no. Instead, we were treated to villains such as the nefarious Captain Plunder, and the Brotherhood of Metallix! Another very well known villain from Sonic the Comic was Sonic himself: or more, Super Sonic, who rather than just being a super powered form for Sonic, was actually a form for Sonic that turned him violent and aggressive; an interesting, and rather awesome take on the form!

The series even covered other SEGA games, with strips based on the likes of Streets of Rage, Shinobi, Wonder Boy, and Eternal Champions; and of course, that’s far from all of them!

Sonic the Comic is something sadly overlooked by many, due to its age and the fact it remained mostly in the UK (some reprints did make it to other areas of Europe however). I’ll be the first to admit: It’s probably the area of Sonic knowledge I’m most rusty in, as I wasn’t born until 1998, as the comic slowly drew to a close. I do however, remember reading a few issues in the kids areas at a few places such as my local doctor’s: particularly, an issue set in the Chemical Plant Zone that showed off the nefarious Super Sonic in action, if I recall. Sonic Mega Collection then ruined me, as due to the comics section in that game that focused entirely on Archie’s comics, I started hunting those rather than the UK comics. As such, today saw me pick up my first ever few issues of Sonic the Comic; and it was accompanied by one hell of a day!

Sonic the Comic-Con started as a Kickstarter,set up by the folks at Sonic the Comic Online and Adam Tuff, who is currently the man behind the Summer of Sonic convention (which went on hiatus this year). It was funded fairly quickly, and the results of that Kickstarter came to be today, and it was incredibly impressive!

I arrived at the venue for about 12 noon. The event started at 10am technically, but most of the events of the day weren’t on until later in the day. Upon getting in, I was greeted by the mighty Adam “T-Bird” Tuff, and spent a while downstairs glancing over the large amount of Sonic the Comic issues they had for sale (Note: for convenience’s sake, from this point on Sonic the Comic will be referred to as StC, for the most part). I was also handed a shiny wristband, a pack of Chewits, and of course, a special issue of Sonic the Comic, back in print with a completely new story! If that wasn’t cool enough, flicking to the back showed that my name was amongst the special thanks to Kickstarter backers; t’was a honour, and very cool to see my name in print!  Ultimately, I popped off upstairs where I was greeted by the main bulk of the event, and more friends of mine such as my Vocaloid-based partner in crime SonicYoda of fellow SEGA fansite SEGADriven. Bearing in mind I didn’t attend last year’s Summer of Sonic, I was incredibly happy to see my friends again; I need to get out more often, suffice to say! 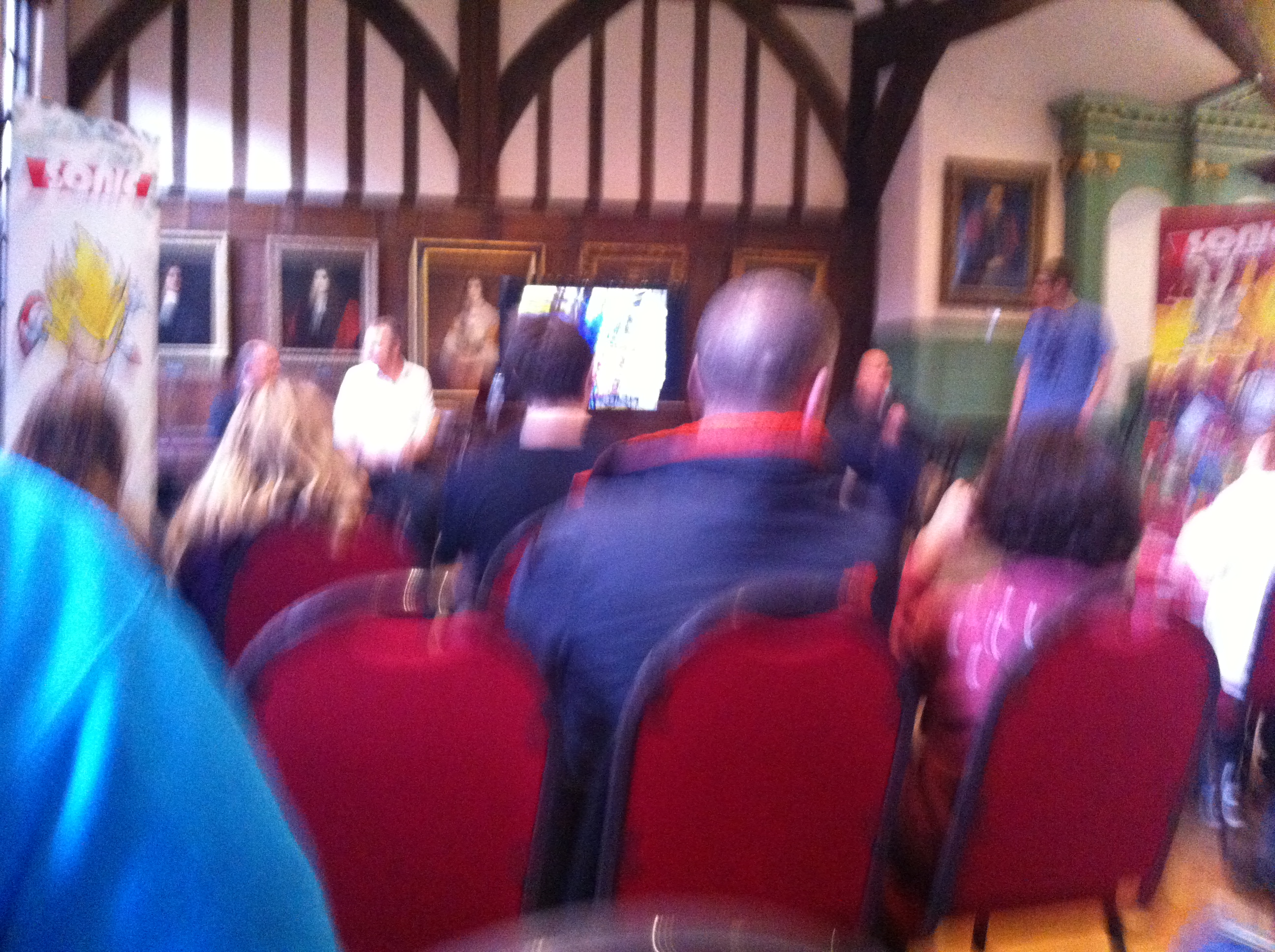 Shortly after I got upstairs, I went and picked up an issue of Sonic the Comic, that being Issue #147 in which Sonic gets temporarily stranded in the UK, and even features a cameo by former UK Prime Minister Tony Blair! After more chatting to friends, it was then time for the first Q&A, with StC talents Ferran Rodriguez, Carl Flint, Jon Haward, and Kev Hopgood (who is also the creator of Marvel’s famous War Machine!). The Q&A was certainly interesting; Ferran revealed that whilst the UK artists for the comic had received folders of Sonic model sheets and colour guides, he got a mere image or two to go off for his work on the comic (though he certainly put that to good use)! There was also a funny moment in which the Haward, who produced the strips based off of Shinobi and Eternal Champions for the comic, said he’d love to illustrate a crossover between the two; at which point there was a call for a Yakuza VS Shenmue strip!

Hopgood also answered who would win: Sonic or War Machine? His response: “Sonic would run away faster!” Oof!

After the Q&A, I grabbed a bite to eat, claimed my free shirt from the event, and decided to get some things signed. Whilst in the line I was able to catch up with some friends, including one rather interesting discussion with my friend Sonic community member Lucky about the Dreamcast game Illbleed and it’s utter strangeness, and many fun tales about acquiring Yuji Naka’s mythical signature. Before long, I met the Sonic the Comic crew, and got my Issue #147 of StC signed, whilst being able to personally thank Richard Elson for the inspiration he had on me in my own artistic endeavours! All in all, I managed to get the comic signed by Nigel Kitching (writer and sometimes artist), Richard Elson (artist, and one of the longest serving artists in fact!), Carl Flint (artist), and Nigel Dobbyn (artist), who all worked on that particular issue! 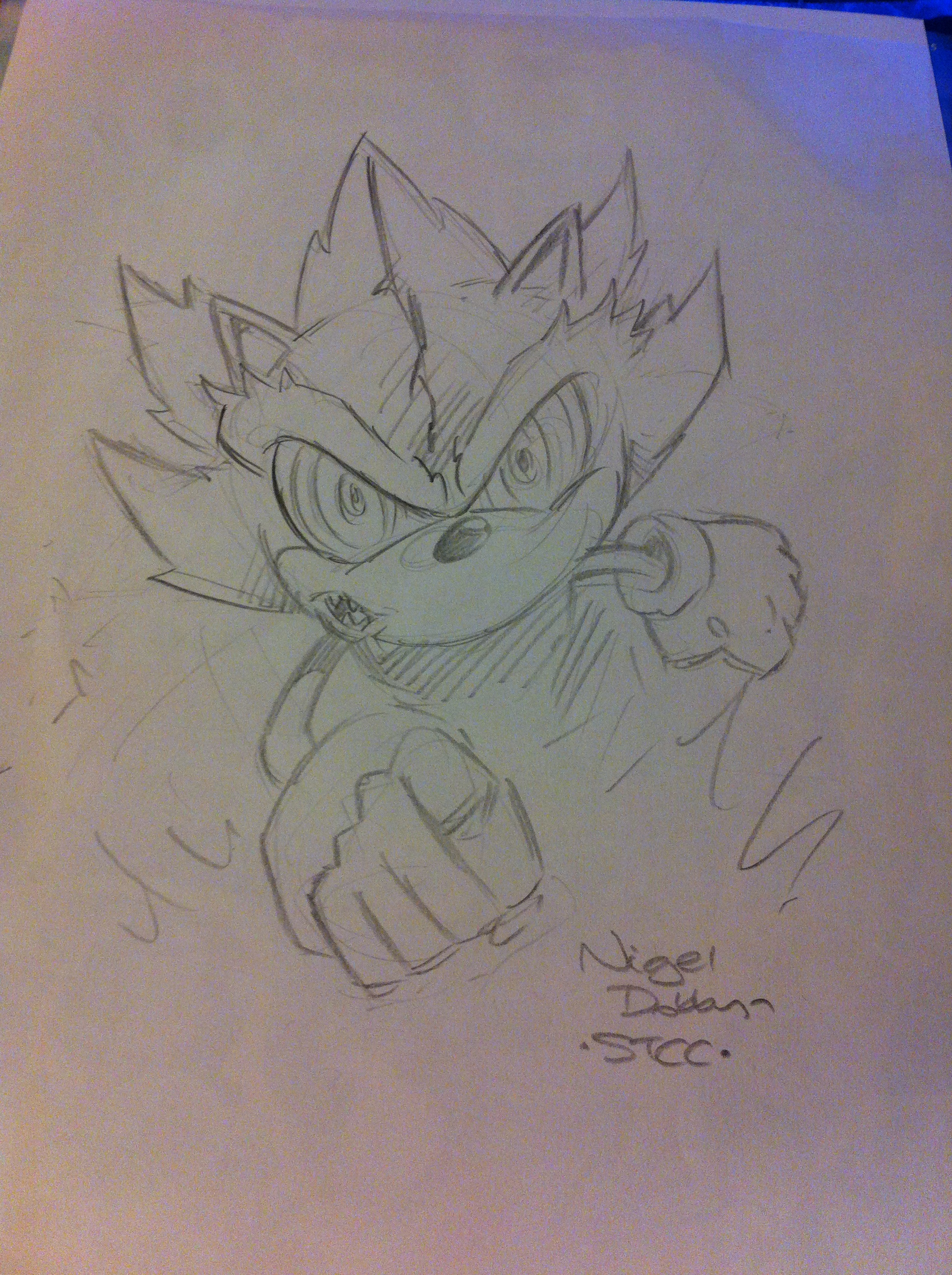 And if that wasn’t cool enough, Nigel Dobbyn then drew me a free sketch of the evil Super Sonic portrayed in the comic! He revealed that Super Sonic was more of Elson and Kitching’s work, and at that point grabbed one of the free shirts as reference material; Super Sonic art by Dobbyn is actually pretty limited in terms of quantity, so it’s an awesome piece to own, and it’s one of a kind! I actually had my wallet out ready to pay, but to offer something of such as high quality for free shows the kindness of these talented artists and writers. I also glanced at Haward, who was inking an amazing looking Shinobi piece; if I’d had more time and money, I probably would’ve grabbed one!

I was also able to get a signature on my convention issue from Ferran Rodriguez, who I thanked for his critique on my own artwork; it was fantastic to meet the man in person, and I’ll probably be seeing him again next year at Weston Super Sonic! He produced a commission of Sonic and Mickey Mouse for a friend, which was unsurprisingly superb!

Also worth noting is during the waiting in line for the signing, the special live episode of Sonic the Comic themed podcast Sonic the Podcast took place. This went down very well, and at one point Mr. Kitching got involved to explain the design change of Dr. Robotnik in the comic (which basically saw him turn into a giant egg and emerge with a new design; it’s Sonic the Comic, folks)!

After the signings, Nigel Kitching and Richard Elson took to the stage for a final Q&A; unfortunately, at this point it was time for me to sod off, due to the fact I can’t drive, and as such my parents were waiting to go home. And so, that’s what we did, once I’d gone and impulse bought a few more issues of StC with strips based on Chaotix and Streets of Rage. Before I left I did manage to hear one question asked: “Why was Sonic such a dick?” Ending on a high note, clearly!

Overall, I can sum up the day as absolutely fantastic! Meeting friends and the talents behind StC was a wonderful experience, and considering this is the first Sonic the Comic-Con, the effort put into it was clearly visible. The atmosphere was also fantastic, lacking the more chaotic and bustling nature of Summer of Sonic; it was far more chilled out, and this definitely helped it! I also feel I should mention the fan works on display, particularly cosplay-wise: there was some superb creativity on show, with characters like Super Sonic, Captain Plunder and even the Owl from the Sonic OVA wearing Sonic’s favourite clothes represented!

I’d easily be down for another Sonic the Comic-Con in the future; I can only hope the same goes for the organisers! 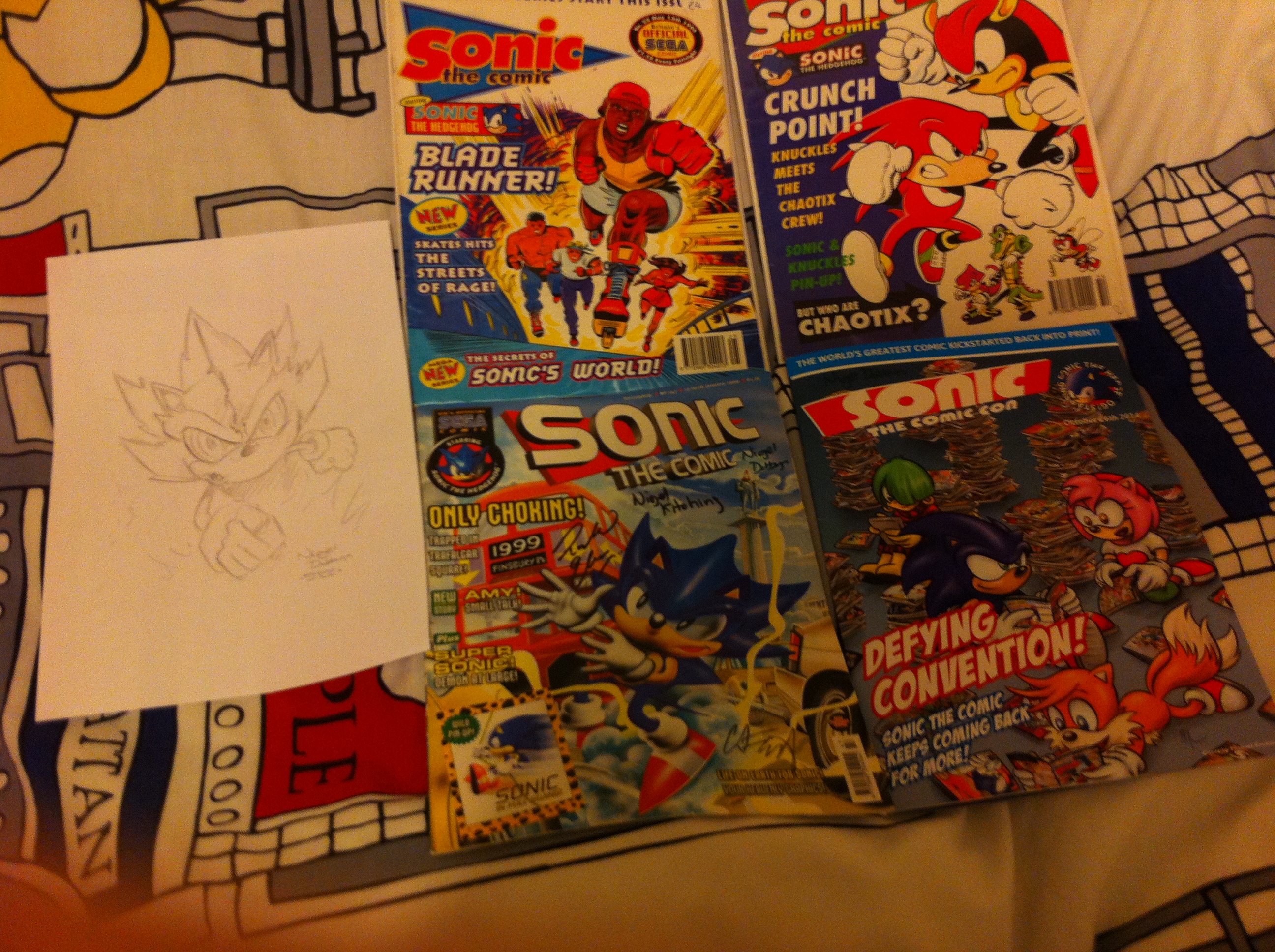 Not a bad haul!

SEGAbits at Weston Super Sonic 2015: The Write Up

One response to “SEGAbits at Sonic the Comic-Con 2014: The Write Up”