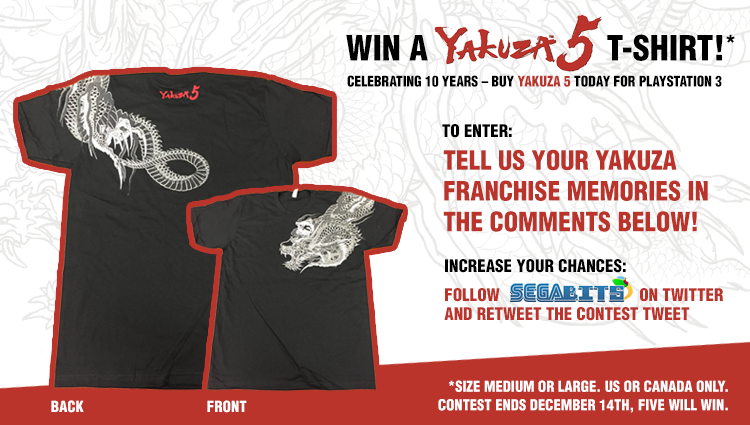 SEGA’s much anticipated Yakuza 5 releases December 8th digitally for the Playstation 3 in the Americas and Europe! To celebrate, we’re teaming with SEGA to give away official Yakuza 5 t-shirts (contest open to the US and Canada). To enter, all you have to do is head on over to Twitter, follow SEGAbits, and retweet our contest tweet to spread the word of the game. Three winners will be randomly selected on Twitter! Not a Twitter user or want to double your chances? Below in the comments section, share your Yakuza franchise memories in celebration of the series 10th anniversary – which happens to December 8th, the same day as Yakuza 5‘s Western release! Two winners will be selected from the comments section based on quality of comment.

The contest ends on Monday, December 14th at 11:59PM CT and winners will be announced the following day. As mentioned, the contest is for the US and Canada only and five winners will be selected. You cannot win twice. Good luck to all who enter and don’t forget to buy Yakuza 5!

23 responses to “Contest: Win a Yakuza 5 t-shirt in celebration of the game’s release and the franchise’s 10th anniversary!”