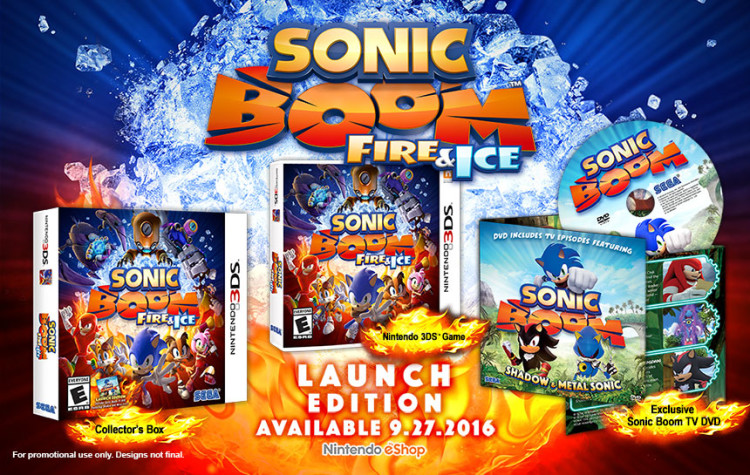 LOS ANGELES, June 1, 2016 /PRNewswire/ — SEGA® today announced that its highly anticipated title Sonic Boom: Fire & Ice, hitting shelves September 27, will be at this year’s E3, where gamers and Sonic fans alike will be able to get their hands on the game for the first time. In time for Sonic’s 25th anniversary, the company also revealed it will include episodes of the hit TV seriesSonic Boom with the game’s upcoming release, giving fans the ultimate Sonic experience.  SEGA’s newest title which will be available on the Nintendo 3DS™ family of systems, will deliver all-new fire and ice gameplay elements that enables players to run through the game at top speed, or take their time with deeper exploration and puzzle play.  SEGA/ATLUS will be located in booth #4810 in the West Hall.

Sonic Boom: Fire & Ice – Launch Edition will include three episodes of the breakout hit animated series – Sonic Boom. The content will be available for the very first time on DVD in North America, packaged with each Launch Edition copy of the game.  Fan-favorite episodes included on the disc will include “Chili Dog Day Afternoon”, “It Wasn’t Me, It Was the One-Armed Hedgehog” which features an appearance by Metal Sonic, and the season one finale “It Takes a Village to Defeat a Hedgehog” which includes the infamous Shadow.

“This is a milestone year for Sonic, and part of the way we’re celebrating his 25th anniversary is by thanking fans with exciting promotions and content. This is the first time that we’re going to package a game with Sonic Boom episodes, and we feel it will serve as a special gift to the fans,” said Ivo Gerscovich, chief brand officer, SEGA of America.

Sonic Boom: Fire & Ice for Nintendo 3DS will be available in stores and in the Nintendo eShop throughout North America onSeptember 27, 2016 for $39.99 and is available for pre-order now at sonicthehedgehog.com/boom.

About SEGA® of America, Inc.:
SEGA® of America, Inc. is the American arm of Tokyo, Japan-based SEGA Games Co., Ltd., a worldwide leader in interactive entertainment both inside and outside the home.  The company develops, publishes and distributes interactive entertainment software products for a variety of hardware platforms including PC, wireless devices, and those manufactured by Nintendo, Microsoft and Sony Computer Entertainment Inc.  SEGA of America’s website is located at www.sega.com

About Nintendo:
The worldwide pioneer in the creation of interactive entertainment, Nintendo Co., Ltd., of Kyoto, Japan, manufactures and markets hardware and software for its Wii U™ and Wii™ home consoles, and Nintendo 3DS™ and Nintendo DS™ families of portable systems. Since 1983, when it launched the Nintendo Entertainment System™, Nintendo has sold more than 4.3 billion video games and more than 680 million hardware units globally, including the current-generation Wii U, Nintendo 3DS and Nintendo 3DS XL, as well as the Game Boy™, Game Boy Advance, Nintendo DS, Nintendo DSi™ and Nintendo DSi XL™, Super NES™, Nintendo 64™, Nintendo GameCube™ and Wii systems. It has also created industry icons that have become well-known, household names such as Mario™, Donkey Kong™, Metroid™, Zelda™ and Pokémon™. A wholly owned subsidiary, Nintendo of America Inc., based in Redmond, Wash., serves as headquarters for Nintendo’s operations in the Western Hemisphere. For more information about Nintendo, please visit the company’s website at http://www.nintendo.com.