OutRun is not a racing game. Steered straight into arcades in 1986 by Yu Suzuki of Shenmue fame, the creator later insisted it was instead a “driving game”.  What’s the difference? Well, the very basis of the it’s ongoing appeal.

To put it simply (since it’s almost impossible not to): you start at a beach and you drive. Maybe you’ll turn left into the mountainous fields of green, or take a right into the dusty stretch of desert. Just drive and drift until you reach the end, making sure you don’t go off the track or crash too many times before reaching the checkpoint. Yet, though you are dodging traffic at high speeds while racing against tight time limit, the game is oddly relaxing. The pure joy of the game is perfectly summarised in title screen. It’s not cars racing each other, or a guitar riff over the logo. No, it’s a tradition that all OutRun games begin with the soft sounds of waves on the beach. Tonally, it’s perfect. The games can be a bit of an adrenaline rush at times, using the simplistic controls to speed through picturesque locations. But it has a grander sense of relaxation and escapism hidden within. 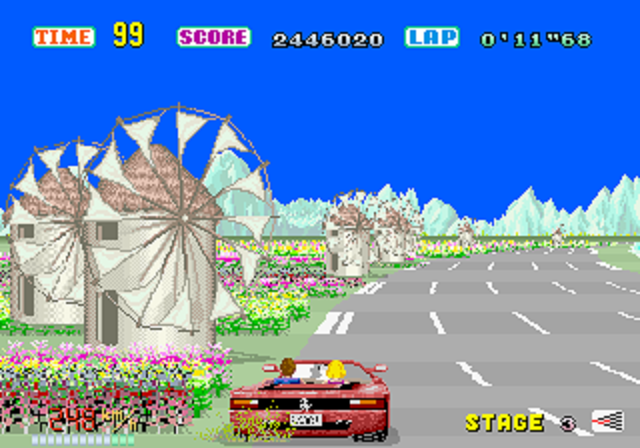 Because at the end of the day, OutRun is not about getting the best ending, or the highest score, or the quickest time. Those are certainly incentives, and there’s plenty of classic arcade fun to be had. But at its heart, OutRun is about tapping into that deeply ingrained sense of wanderlust we all feel. Just drive away. Keep moving forward through iconic SEGA blue skies and palm trees. Sitting in that car shaped cabinet, it was hard not to feel as if you were leaving your life behind on some level. They say all games are some form of escapism, this not no truer than it is or OutRun. I mean, it’s in the title.

Not to say OutRun is an easy game. Though I wouldn’t call it particularly hard ether, but it was an arcade game. As such, before mastering, you may find yourself crashing your car a few more times than you think you should be. It was, at the end of the day, still designed to wriggle as much change from your pocket it as it could; the time limit was just as much a part of this as the multiple branching paths that meant no two playthroughs need to be the same.

Released to critical acclaim, OutRun had a number of “unofficial” sequels, spin offs and ports, yet only one “real” sequel was ever made. OutRun 2 gave the fans exactly want they wanted: more OutRun. More cars, more locations, more tracks were all delivered. New, optional mini-games were also added during gameplay; such as rivals to beat or hearts to be won off your girlfriend for driving dangerously. OutRun 2 would continue to be updated and re-released as “ OutRun 2 SP”, “Outrun 2006 Coast to Coast” and the now undownloadable “Outrun Online Arcade”. For a game that has been often been included on “Greatest games ever made”[1] lists, this is a downright crime. 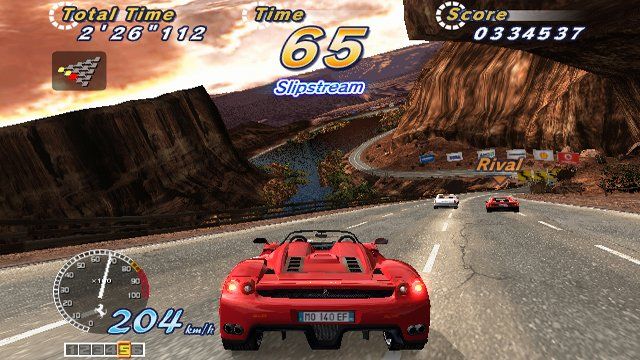 Indeed, just add OutRun to the pile of “egregiously ignored IPs” that desperately needs a new HD entry. Perhaps more so than others. For a game where style is so heavily tied to the quality of its substance, the idea of a fully next gen OutRun game has me twitching in my seat.
Before I sign off, it would be amiss not to consider the series stellar soundtrack. From Sonic to Jet Set Radio, SEGA knows how to make an OST, and the OutRun series is no exception. Yet, the tracks were not the usual thumping techno beats that filled 80’s arcades, but an invigorating mix of pop and jazz.

I am very guilty of putting on the OutRun OST during those late nights working; it puts me into the perfect state of zen, focused but relaxed. This, again, is to awaken that feeling of escapism in the player. To travel into the horizon and just enjoy going there.There are definite tones of Romanticism in the series, which I feel really sets it apart from the crowd.

It is an extremely memorable string of games. An icon of SEGA history. Not only is it a series with an insanely low number of “proper” sequels, but it doesn’t really have a parallel. Maybe games like “Journey” tap into that sense of travel, and maybe games like “Harvest Moon” give you an escape from your normal 9 – 5 working life. But they don’t have that “Get in the car and go” arcade fun OutRun had along with it. I truly believe this is a large part we still remember it today. Why the series continues to be ported and is frequently present in games like All-Star Racing and Shenmue.

For a lot of games, arcade games particularly, you are pushed to keep going. Kill X number of enemies quickly, get the highest points in the time limit, get to the next level before it’s too late. This game let you just hit pause and enjoy getting away for a little bit. With OutRun, it was always about the journey; one that I hope we haven’t seen the end of quite yet.